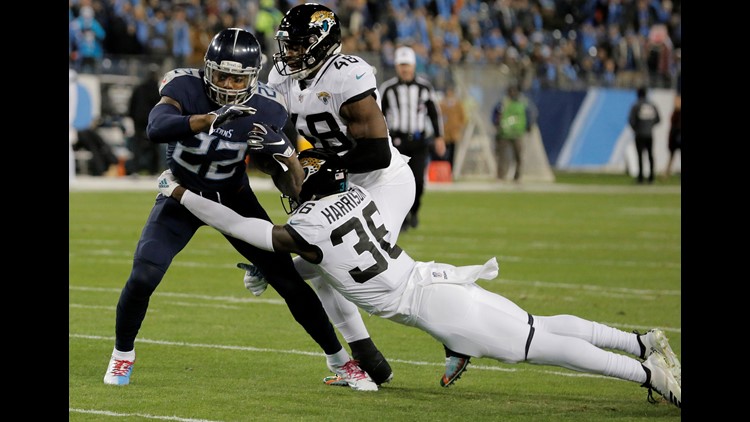 Photo by: AP
Tennessee Titans running back Derrick Henry (22) breaks a tackle by Jacksonville Jaguars defensive back Ronnie Harrison (36) during the first half of an NFL football game, Thursday, Dec. 6, 2018, in Nashville, Tenn. Henry scored a touchdown on the play. (AP Photo/James Kenney)

The Jacksonville Jaguars (0-2) will go for their first win in five tries against their AFC South rivals, the Tennessee Titans (1-1), Thursday at TIAA Bank Field. Kick-off is scheduled for 8:20 p.m. on the NFL Network and broadcast locally on ABC25.

As if facing their heated rivals wasn't enough, there's been plenty of drama in Duval County through just two weeks of the regular season.

All-Pro cornerback Jalen Ramsey and his agent requested a trade following the Jaguars' 13-12 lost to the Texans in Week Two. Ramsey had a career performance, holding Pro Bowl receiver DeAndre Hopkins to just 40 yards; however, Ramsey also was involved in a scuffle with his head coach, Doug Marrone, in the first quarter. Allegedly, Ramsey wanted Marrone to challenge a Hopkins reception that was ruled a catch; neither would confirm or deny what spurred the disagreement.

"What did Coach say? He didn't remember [why]?" Ramsey remarked during a 16-minute press conference Tuesday afternoon. "So, sh--, y'all go off of that."

During that last-minute press conference, Ramsey reiterated that, as long as he is a Jaguar, he plans to give his all. He would not give any specific reasons for why his agent requested a trade, opening up the door for more speculation.

Additionally, Quarterback Nick Foles, who the Jaguars signed to an $88-million contract this off-season, suffered a collarbone injury on just his eleventh play as a Jaguar. The team placed him on the Injured List, and Foles is eligible to return to game action Week 11 at Indianapolis. In Foles' absence, rookie Gardner Minshew has performed admirably, setting several, first-year player records in his first NFL appearance against the Chiefs and leading a potentially game-tying drive down the field with two minutes remaining in Houston last week. Minshew has posted a 78% completion rating and thrown for 488 yards through those two games.

The injury bug has hit other position groups, too. Defensive end Yannick Ngakoue, cornerback A.J. Bouye, and wide receiver Marqise Lee all did not travel to Houston with injuries. Left tackle Cam Robinson and swing tackle Cedric Ogbuehi have both missed the first two games. All five players participated in practice in some capacity leading up to Thursday's game.

Meanwhile, it's been a tale of two games for the Titans in 2019.

Mariota took a step back in the Titans' home opener against the Colts, only throwing for 154 yards (an average of 5.5 yards a play) and one touchdown. Indianapolis scored six unanswered points in the fourth quarter to steal one from the Titans 19-17.

One constant for Tennessee since he infamously ran all over the Jaguars in their December 6, 2018 meeting: Yulee native Derrick Henry. The Titans' featured running back has found the end-zone in both of their first two games, and is averaging about five-yard per carry. Henry had arguably the run of the 2018 NFL season against the Jags, running 99 yards for a score.

"We don’t need to watch that again. I see it on NFL Network all the time," Jaguars defensive coordinator Todd Wash said Tuesday. "My wife always brings it up. [She says] that wasn’t a very good play, so I’m like, ‘Mr. Obvious, right?’ No. They have seen it before. The bottom line is he made a play. Give credit to him, but we have to do a better job of stopping it this time on Thursday.”

Tennessee won both meetings in 2018, defeating the Jaguars in Jacksonville 9-6 and in Tennessee 30-9. The latter was also a Thursday night game.

Be sure to get ready for kick-off with First Coast News' Ready to Roar pre-game special at 7 p.m on ABC25.