The Jacksonville Jaguars (4-4) make their seventh trip to London in franchise history this weekend to face their AFC South rivals, the Houston Texans (5-3). Its the first trip "across the pond" for the Texans. Houston won the first meeting between the two this season 13-12 in Week Two; the Jaguars scored the would-be, game-tying touchdown with 30 seconds remaining, but elected and failed to convert a go-ahead two-point conversion.

With Nick Foles eligible to come off the Injured List Week 11 when the Jaguars travel to Indianapolis, many wonder if this is the last start we will see from rookie phenom Gardner Minshew. Minshew won his sixth, Pepsi NFL Rookie of the Week honor earlier this week after throwing for 279 yards and three touchdowns against the Jets in a Week 8 win. Minshew is 4-3 as a starter.

The First Coast Sports team will bring you updates live from London plus back here in Jacksonville throughout this game -- beginning with our pregame show at 8 a.m. EST.

It's only his third career interception, but Gardner Minshew's pick at the hands of Jahleel Addae just about puts this one out of reach for the Big Cats. Jacksonville trails by two scores with a little over five minutes remaining.

A 48-yard run by former Jaguar Carlos Hyde sets up the second Texans' touchdown of the day, a 1-yard score from his running mate, Duke Johnson.

Jacksonville has given up 327 yards on the day.

Another punt from Logan Cooke as Gardner Minshew and the Jaguars offense continue to struggle. Just 186 total yards of offense for the Big Cats; Minshew is 15 of 24 for 130 yards, but has been effective with his legs, picking up 18 yards.

By far and large, from the conservative play-calling to the inability to get to Deshaun Watson, this one looks a whole lot like the first meeting between these two teams.

Yannick Ngakoue finally gets to Deshaun Watson, forcing the Texans to kick yet another field goal.

Jaguars able to march 44 yards down the field on their opening drive of the second half and set up a Josh Lambo field goal; however, a high snap results in a fumble. Lambo falls on it to set the Texans up around midfield for their first drive of the third quarter.

The Texans miss a field goal with 11 seconds to go, giving the Jaguars one final possession; however, Gardner Minshew is only able to find Seth DeValve for a 17-yard completion as time expired.

Best Jaguars drive of the day ends with a 30-yard Josh Lambo field goal. Play of the day so far came on 3rd and 6 early on in the drive, as Gardner Minshew scrambled to find fellow rookie Ryquell Armstead for a 31 yard pick-up.

The Texans march 80 yards down the field in 8:14 and find the endzone for the first time today. Deshaun Watson flips it to Darren Fells for their third touchdown in two weeks.

However, Cody Davis block the extra point, so the Texans only lead Jacksonville 9-0.

Another possession, another punt for the Jaguars. However, Leonard Fournette with some impressive running, including a first-down run that forced Texans' cornerback Johnathan Jospeh out of the game.

Logan Cooke punt bounces into the end-zone for a touchback.

Another big pass break-up for safety Ronnie Harrison, as the Jaguars force the Texans to punt for the first time today.

Houston wide receiver Kenny Stills (groin) was Questionable to return, returned, and was promptly shaken up on a first-down catch.

Jaguars forced to punt on their opening possession, but some nice grabs by D.J. Chark, who already has 14 yards on the day.

Texans score on their opening drive for the first time this season, a 52-yard field goal by Kai Forbath. "Sacksonville" bends but does not break, giving up four first down's but aided by three, costly Houston penalties.

The Jaguars and Texans have kicked-off from London. Jacksonville won the toss and had deferred to the second half. Houston will start with the ball. 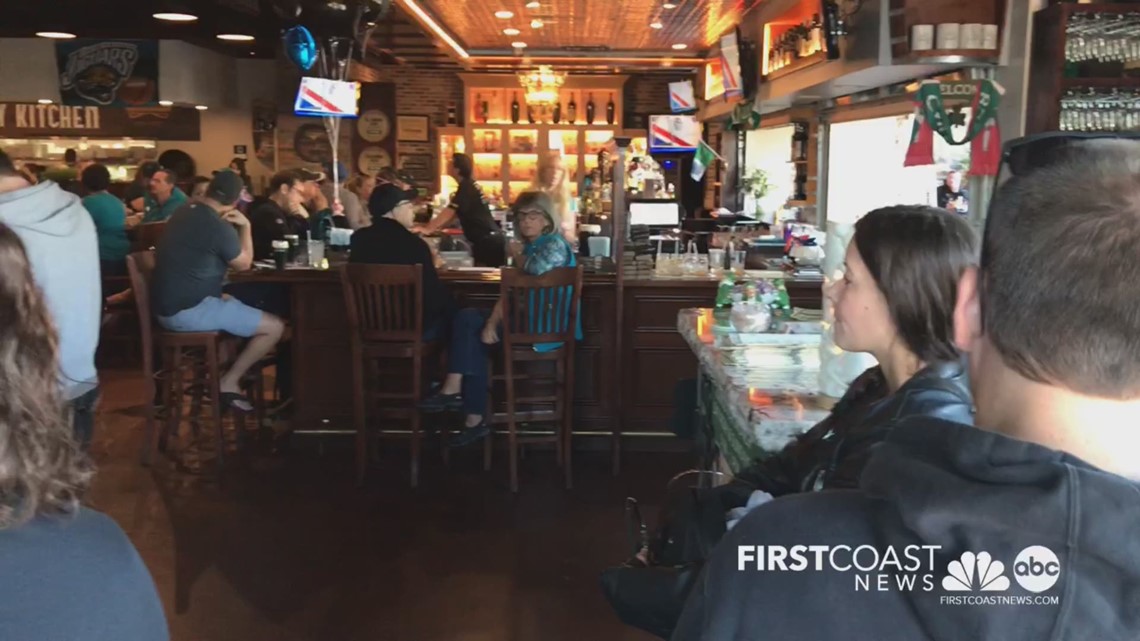 Things are kicking off at Culhane's Irish Pub for FCN's Ready to Roar Watch Party
The Jacksonville Jaguars are set to take on the Houston Texans at 9:30 a.m. in London. Be sure to watch the game live on ABC-25.

The odds-line for the Jaguars and Texans has moved to "even" this morning, following the release of inactives for both teams. The Texans were previously a 1.5-point favorite.

The Houston Texans have announced the following inactives against the Jaguars:

The Jaguars have announced the following inactives against the Texans in London: