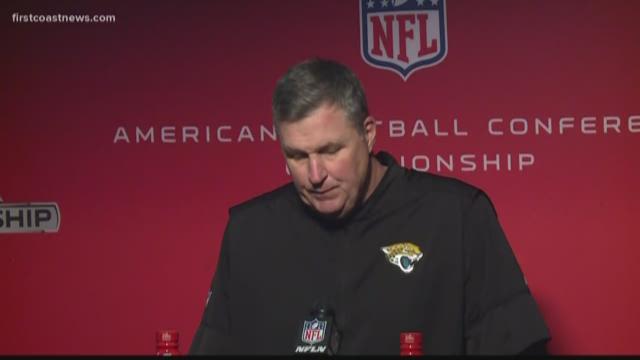 FOXBOROUGH, Mass. -- The Jaguars will not be going to the Super Bowl, following Sunday's 24-20 AFC Championship Game loss to the New England Patriots at Gillette Stadium.

While the Jaguars held the lead for the majority of the game, Patriots quarterback Tom Brady offered up his typical fourth-quarter magic, leading two touchdown drives in the final quarter.

Jaguars quarterback Blake Bortles completed 23-of-36 passes for 293 yards and touchdown against the Patriots on the road. Bortles' top target in the game was wide receiver Allen Hurns, who caught six passes for 80 yards.

The Jaguars' offense was assisted by the strong performance of their running back trio of Leonard Fournette, T.J. Yeldon and Corey Grant. The group combined for 103 total rushing yards and 78 receiving yards against New England.

The Jaguars were whistled for six penalties for 98 yards. The Patriots were called for one penaltie for 10 yards.

The Patriots' offense started with the ball on their own 25-yard line following a touchback on Josh Lambo kickoff.

During the second play from scrimmage, Brady hit wide receiver Brandin Cooks for a 31-yard gain. Cooks was matched up against linebacker Telvin Smith. The wide receiver was able to break free from Smith's coverage and catch Brady's pass for the big gain.

The big play by Cooks put the Patriots in Jacksonville territory. On fourth-and-1 from the 30-yard line, Brady hit Amendola for a 20-yard gain and a first down. On third-and-12 from the Jacksonville 12-yard line, the Patriots lost yardage. Jaguars defensive end Dante Fowler took Brady down for a sack.

Patriots kicker Stephen Gostkowski connected on a 31-yard field goal to give New England a 3-0 lead with 9:21 left in the first quarter.

Running back Corey Grant returned the follow-up kickoff 25 yards to the 26-yard line. The Jaguars were able to pick up two quick first downs but were eventually stopped at mid-field.

Following a Brad Nortman punt, the Patriots' offense took over at their own 14-yard line. While the Patriots were able to pick up an additional first down, the Jaguars stopped New England from making any more progress.

After a punt by Ryan Allen, the Jaguars' offense was set up at their own 24-yard line. Bortles started the drive with a quick pass to Grant, who moved the ball upfield for 20 yards and a first down.

The Jaguars continued to build momentum with the use of Grant in the passing game. Jacksonville eventually scored a touchdown on a four-yard pass from Bortles to tight end Marcedes Lewis. Following an extra point, the Jaguars led the Patriots, 7-3, with 14:15 left in the second quarter.

The Jaguars held onto the momentum on the next drive. The defense held the Patriots to a three-and-out. New England was forced to punt for the second time in the first half.

The Jaguars were called for a false start to open their third offensive drive. Bortles hit Grant for a 15-yard gain and Hurns for a 27-yard completion. The pair of catches pushed the Jaguars into Patriots territory.

The Jaguars used the running game to move in the red zone. Jacksonville eventually scored on a four-yard run by Fournette. After an extra point, the Jaguars led, 14-3, with 7:06 left in the second quarter.

The Patriots were able to get back on the scoreboard a pair of big Jaguars penalties. Safety Barry Church was charged with an unnecessary roughness penalty which moved the Patriots upfield 15 yards. Cornerback A.J. Bouye was called for a 32-yard pass interference penalty in the red zone on the next play.

The Patriots capped the drive two plays later with a one-yard touchdown run by running back James White. The score was 14-10 with 55 seconds remaining in the first half.

After halftime, the Jaguars were able to put more points on the board. Despite losing left tackle Cam Robinson to a shoulder injury, the Jaguars marched down the field into scoring range.

Lambo was able to convert on a 54-yard field goal attempt, moving the Jaguars' lead to seven points. Jacksonville was up, 17-10, with 10:24 left in the third quarter.

The Jaguars' defense held tight on the next drive. The Patriots were forced to punt following another failed drive.

The Jaguars came back on the attack. Bortles led another field goal-scoring drive that lasts until the start of the fourth quarter. Following a 43-yard field goal from Lambo, the Jaguars led 20-10 with 14:52 left in the game.

The Jaguars' defense came up big on the next play, as linebacker Myles Jack produced a forced fumble on a 20-yard reception by Lewis. Jack also recovered the ball.

However, the offense wasn't able to do anything with the ball and was eventually forced to punt.

The Patriots' offense came roaring back, moving the ball for 93 yards and a touchdown on the next drive. Brady threw for all of the yardage on the touchdown drive. Following an extra point, the Jaguars' lead was cut to three.

The Jaguars offense moved the ball early during the next drive. Bortles hit Hurns for a 20-yard gain on the second play of the series. However, they were unable to make up ground after the initial first down and would punt three plays later.

A 36-yard pass interference penalty on cornerback Jalen Ramsey put the Patriots in Jacksonville territory after just one play. However, the Jaguars defense held tight and the Patriots weren't able to pick up yardage after the initial gaffe.

The Patriots defense forced a three-and-out on the next drive. Amendola then picked up 20 yards on a 41-yard punt from Nortman.

The Patriots started the drive in field goal range. Brady then led the offense on a quick scoring drive, moving the ball 30 yards in five plays. The drive was capped by a four-yard touchdown pass from Brady to Amendola. Following an extra point, the Patriots led 24-20 with 2:48 left in the game.

The Patriots defense held tight after allowing a 29-yard completion from Bortles to Westbrook. The Patriots won the AFC Championship for the third time in four years.

PHOTOS: First half of AFC Championship belongs to Jags, Gronk out

1 / 5
FOXBOROUGH, MA - JANUARY 21: Rob Gronkowski #87 of the New England Patriots reacts after an injury after being hit by Barry Church #42 of the Jacksonville Jaguars in the second quarter.(Photo by Kevin C. Cox/Getty Images)

PLAYER OF THE GAME

Bortles completed 23-of-36 passes for 293 yards and a touchdown. He led four scoring drives in his third playoff game.

PLAY OF THE GAME

Linebacker Myles Jack forced a fumble on running back Dion Lewis in the fourth quarter with 13:37 left in the game. Jack recovered the fumble, giving the Jaguars possession with a 10-point lead.

Lewis picked 20 yards before fumbling the ball in Jacksonville territory.

STAT OF THE GAME

Defensive tackle Marcell Dareus left the game with a leg injury in the fourth quarter.