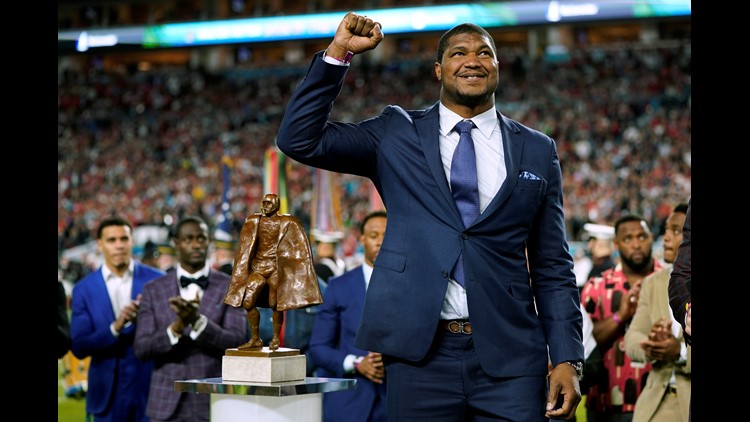 The Jacksonville Jaguars are set to trade defensive end, Calais Campbell, to the Baltimore Ravens when the new league year begins, per multiple reports. In exchange, the Jaguars would receive a 2020 fifth-round draft pick.

This news comes on the heels of a new CBA agreement which sets the salary cap for each of the 32 NFL teams at $198.2 million. According to the NFL Network's Ian Rappaport, the Jaguars have made this move in an effort to create further cap space. Prior to this move, Jacksonville has $14.8 million in cap space, good for 26th in the League.

Entering the final year of a four-year contract with the Jaguars, Campbell carried a cap number of $17.5 million in 2020. He and the Ravens will reportedly work out a new deal upon finalization of this trade.

"The Mayor of Sacksonville" during his three years in Duval County, Calais Campbell posted back-to-back, double digit sack numbers in his first two years in Jacksonville. That number did take a step back in 2019, with the 33-year old registering 6.5 sacks, 10 TFL, and 25 QBH.

But his impact far exceeded his performance on the field.

The Walter Payton Man of the Year has become a fixture in the Jacksonville community through his family's foundation. The Colorado native donated $100,000 in 2019 alone to Jacksonville and Denver based charities, while also serving the Jaguars Foundation; that included hosting 250 kids for a youth football and STEM class, visiting local military installations during Salute to Service week, and making appearances at local schools.

This trade also comes after the Jaguars dealt fellow 2017 free agent signee A.J. Bouye to the Denver Broncos for a fourth-round draft selection.

The Jaguars now have 11 selections in this April's NFL Draft.