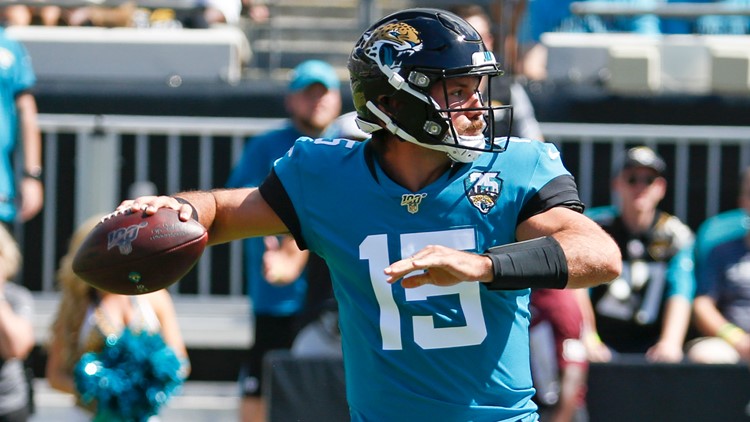 Photo by: AP
Jacksonville Jaguars quarterback Gardner Minshew throws a pass during the first half of an NFL football game against the New Orleans Saints, Sunday, Oct. 13, 2019, in Jacksonville, Fla. (AP Photo/Stephen B. Morton)

Jaguars quarterback Gardner Minshew II is capturing the magic ... and the mania and the mustache, from a trademark standpoint.

Minshew has filed applications with the U.S. Patents and Trademark Office to register the phrases “Minshew Magic,” “Minshew Mania,” and “Mississippi Mustache.” If approved, the registered phrases can’t be used by anyone without Minshew’s approval -- and without him getting a cut of any sales.

The applications, made on Nov. 21, also have a long list of clothing and apparel items that the phrases could be used on, such as adult, children and baby clothing, hoodies, pajamas, bibs, headwear and socks.

There was no listing for jockstraps. One of the many stories that came out when Minshew became the Jaguars starting quarterback and led them to an early 4-4 record was that he liked to work out wearing nothing but a jock -- which caught the attention of an adult online webcam site, which offered him $1 million to do a workout video.

Minshew’s personality and performance on the field captured not only Jaguars’ fans when the team was winning games, but he received nationwide attention that included a skit done with “Uncle Rico,” from the movie “Napoleon Dynamite” for ESPN. Minshew Mania was a phrase that came into use last year when he led Washington State to a program-tying 11 victories and led the Pac-12 in passing.

Minshew was benched after a 26-3 loss to Houston in London, when preseason starter Nick Foles had recovered from a broken collarbone he suffered in the opening game against Kansas City. Minshew entered that game and completed his first 13 passes, then set the team record for completion percentage in one game (.800, 22 of 25).

He went on to lead a comeback victory over Denver with a final drive that resulted in the winning field goal by Josh Lambo, and made a series of dazzling plays in victories over Cincinnati and the New York Jets.

Minshew regained the starting job after Foles had three turnovers in the first half against the Tampa Bay Bucs three weeks ago. Coach Doug Marrone said the next week that Minshew would start the rest of the season.

The Jaguars play at Oakland on Sunday.