With organized team activities (OTAs) and mandatory minicamp now in the history books, it's time to take stock of the strengths and weaknesses of the roster with our first 53-man roster prediction of the offseason.
Author: Mike Kaye
Published: 10:41 AM EDT June 19, 2018
Updated: 10:55 AM EDT June 19, 2018

The Jaguars recently completed their offseason program and the team is roughly a month away from the start of its annual training camp.

With organized team activities (OTAs) and mandatory minicamp now in the history books, it’s time to take stock of the strengths and weaknesses of the roster with our first 53-man roster prediction of the offseason.

Removed from the Roster: Tanner Lee

Analysis: The Jaguars have clearly indicated that fifth-year quarterback Blake Bortles is “their guy” for at least the next two seasons. The franchise rewarded him with a team-friendly extension in the offseason and the quarterback instilled confidence in that gamble with a stellar performance during the offseason program.

While Bortles is etched in stone at the top of the quarterback depth chart, the same can’t be said for his understudy. The team traded the NFL equivalent of an airport kiosk garden salad (a conditional 2019 seventh-round pick) to the Cleveland Browns for Cody Kessler in March and drafted rookie Tanner Lee in the sixth round of April’s draft. Neither player was acquired at a heavy price, meaning the Jaguars won’t be forced to rely on either player if they both falter with their training camp and preseason performances.

Kessler clearly had the better offseason program sampling, as he developed chemistry with second-round wide receiver DJ Chark, Rashad Greene, Shane Wynn and Jaydon Mickens throughout OTAs. Lee had one or two fantastic downfield passes per workout/practice but was pretty inconsistent otherwise.

The Jaguars may keep all three quarterbacks, but for now, it’d probably be prudent to stash just two. Jaguars head coach Doug Marrone wants his players to earn their jobs and Lee will need to do that during training camp.

Analysis: Last year’s fourth overall pick will look to build on his relatively successful rookie season with a slimmer frame. Fournette has dropped from 234 pounds to around 223 pounds this offseason and the weight loss was evident with his appearance during last week’s mandatory minicamp. Losing weight should enable Fournette to improve his short-area quickness this season.

Yeldon and Grant will rotate behind Fournette this year. Yeldon is an ideal third-down back who is entering his contract year. The former second-round pick will need to excel as a receiver and blocker to earn a new contract in Jacksonville or elsewhere. The Jaguars will also hope that Yeldon improves as a runner with the potential for a Fournette missed game or two due to injury.

Grant received a second-round restricted tender this offseason ($2.9 million) and will need to prove his worth as a gadget player on offense and an ace on special teams. He has shown promise when given an opportunity to be a contributor on offense in the past, so the Jaguars would be wise to offer him more looks this season.

Cook and Wilds could be competing for a fourth running back role, but right now it doesn’t seem like either has done enough to make the roster.

On the Squad: Tommy Bohanon

Removed from the Roster: N/A

Analysis: Bohanon is running unopposed as of now, despite the fact that he failed to take part in team drills during the offseason program. The team cut Lamar Atkins last week, so Bohanon has probably recovered from the undisclosed injury that hindered him during OTAs. It would not be shocking to see the Jaguars add a camp body to the mix at this position.

Analysis: Moncrief and Lee seem to be the Jaguars’ top two receivers on the outside, while Cole appears to be the best fit for the slot. Westbrook, Chark and Greene all offer the versatility to play inside and outside, a trait that wide receivers coach Keenan McCardell covets. The latter trio also put forth a very strong combined effort during the offseason program.

Greene is the leader in the clubhouse for the sixth spot with the first five jobs seemingly locked up. Greene was on fire during the offseason program, as he was able to get open with regularity and catch the ball cleanly. His top competition for the final spot is a combination of Wynn, Mickens, Lazard and Smelter. Wynn and Mickens finished strong during mandatory minicamp. Lazard and Smelter offer size that is unrivaled at the position.

The punt returner job may have a direct impact on the sixth wide receiver job. Greene, Wynn and Mickens all have experience with that role.

Analysis: Seferian-Jenkins may have been the best offensive skill player on the Jaguars’ roster during the offseason program. Day after day and week after week, Seferian-Jenkins produced highlight reel material. He will seemingly be a receiving upgrade over the recently departed Marcedes Lewis.

Behind Seferian-Jenkins, it remains to be seen who the Jaguars’ second and third tight ends will be. Paul is probably the best player among the options but O’Shaughnessy has played well enough to warrant a broader discussion. Koyack offers upside as a blocker with Seferian-Jenkins, O’Shaughnessy and Paul all benefitting from better receiving skills.

Grinnage and Orndoff are most likely battling for a practice squad spot.

Analysis: The Jaguars are likely to go with their initial projected starting offensive line this season, despite the recent implications of a right guard competition. Cann is well liked among the Jaguars’ coaching staff, and now that he is healthy, the lineman can start working with his fellow blockers.

Norwell is the lone new addition to the starting lineup. He has already fit in very well with his teammates, with several of his fellow linemen complementing his quick understanding of the playbook.

Richardson was the team’s fourth-round pick and he seems to be a good bet for the swing tackle job this year. Shatley will return as the top interior blocker for the Jaguars, while Poehls and Walker serve as deep depth wild cards.

Wells and Reed have been around for a while, but the additions of Norwell and Richardson knock them further down the depth chart. Wells could earn a swing tackle spot for another team with a strong performance during the preseason, similarly to how Luke Bowanko made himself marketable for a trade to Baltimore after producing a solid exhibition season last year.

McDermott and Smith could be pegged for the practice squad. 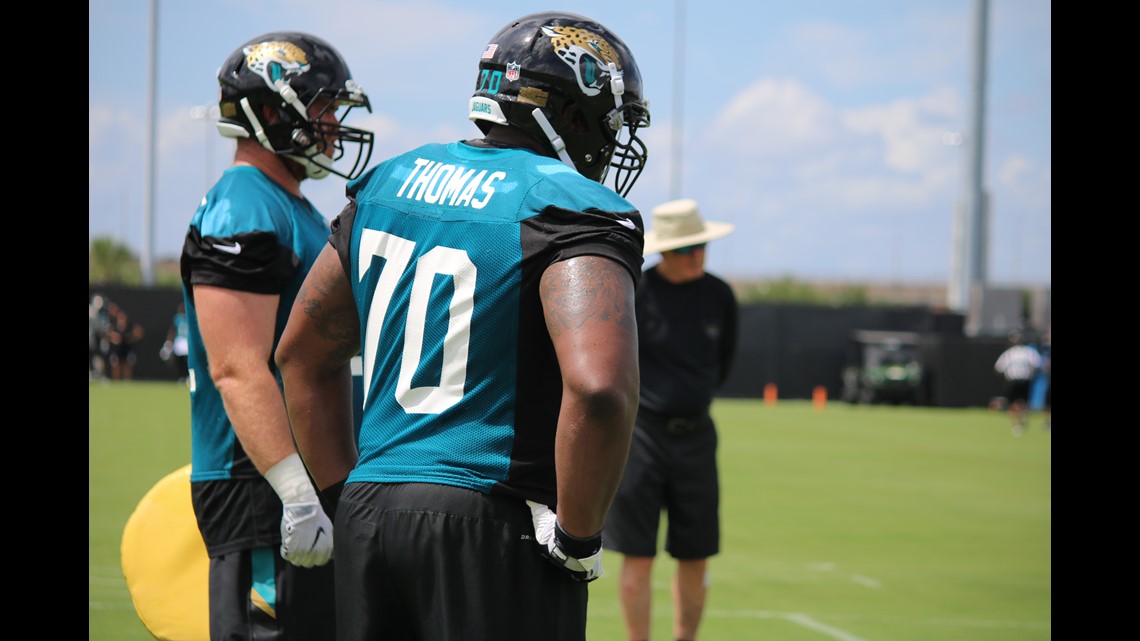 Analysis: The Jaguars want to build multiple platoons for the defensive line. To accomplish that feat, they’ll need to stock the group with heavy numbers. While housing 10 defensive linemen probably seems like overkill, remember that McCray will mostly play on special teams and Ankou will most likely be an emergency asset.

Bennett, Dimick and Phillips have been around the team for a bit but there just doesn’t appear to be a lot of room for them with such a stacked depth chart.

Analysis: The dynamic tandem of Smith and Jack should give the Jaguars one of the fastest nickel linebacker duos in the league. While Jack worked off to the side for the majority of OTAs, the coaching staff believes he has what it takes to play middle linebacker. Jack made very large strides during the playoffs, so it’s hard to be “down” on the staff’s confidence in him.

The SAM linebacker job will work itself out during training camp and the preseason. Outside of Jack and Smith, the entire group has a shot at the third linebacker job.

Right now, Brown seems to be the favorite on paper, while Payne’s impressive offseason program output (two interceptions and several pass breakups) has him poised for a bigger role in his second season with the team. Jacobs, one of the team’s two seventh-round picks, seems to be an ideal fit for the SAM role but he will need to prove his worth when the pads come on during training camp.

Analysis: Jacksonville is the lone NFL squad with two All-Pro cornerbacks on its roster. Ramsey and Bouye form the clear-cut top cornerback duo in the league heading into training camp.

The Jaguars are looking to replace Aaron Colvin at the nickel cornerback spot with Hayden. The coaching staff likes Hayden’s man-coverage skills and thinks he is a work-in-progress in zone looks. Hayden didn’t play the nickel role last season in Detroit but defensive coordinator Todd Wash was a fan of the player’s work in the slot during his Oakland run. Patmon has emerged as Hayden’s main competition for the job.

Seamster seems to be ahead of the rest of the crowd for the final cornerback spot. While it’s entirely possible that the Jaguars only keep four cornerbacks, Seamster played well against the first-team offense during the offseason program and started in place of Ramsey during OTAs.

Analysis: The Jaguars have upgraded their safety group in a major way this offseason. With Harrison, Davis and Carey added to the mix, the Jaguars quietly have one of the better depth units in the entire NFL.

Wilson may become the collateral damage of the Jaguars’ upgrades in the secondary. While Wilson has been with the team for two seasons, he isn’t as skilled on special teams or as versatile on defense as Carey, who is in his second stint with the Jaguars. Carey’s ability to play cornerback will help the team with active roster numbers during the season.

Reavis has probably been the biggest undrafted standout of the bunch this offseason. Still, the safety position is stacked, so he may just end up on another roster or the practice squad.

Removed from the Roster: Andrew East

Analysis: Lambo and Cooke have no competition at this point. While East was signed last week, it would be a major upset to see him outlast Tinker this offseason.

The Jaguars may be wise to look into competition for Cooke. The rookie punter should be forced to his job this summer.