Jaguars OTAs: with 100 percent attendance, which players stood out on Thursday?

From Tebow to Trevor and beyond: for the first time since Rookie Camp, Jaguars' voluntary work-outs were open to the media. 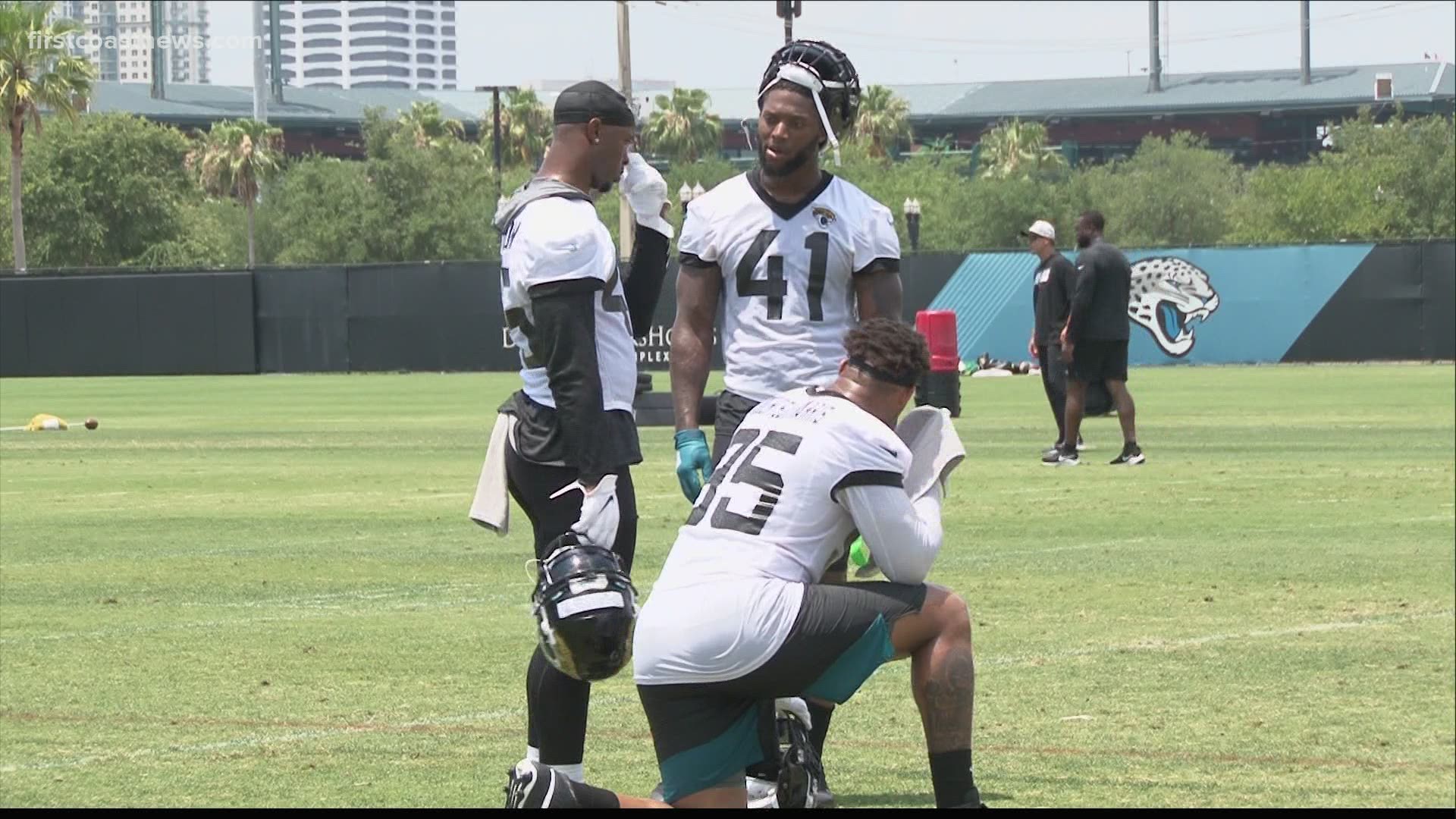 Phase III of Voluntary Off-Season Work-Out's continued across the NFL this week, and while many teams saw low participation numbers (*cough* Aaron Rodgers and the Green Bay Packers *cough*), all 90 members of the Jacksonville Jaguars roster were in attendance for Thursday's OTAs. The Jaguars have had close to perfect attendance since Phase III began last week, and teams were permitted to work-out together at the club's facility.

Phase III continues through mid-June, when teams will host Mandatory Mini-Camp. The Jaguars' mini-camp is slated for June 15-17. Before then, the Jaguars will have two, additional OTAs open to the media.

Well, the vibe at Jaguars OTAs is way different than last year (because we didn't have them -- got ya!), the 2019 version, and, as players confirmed after practice, basically any voluntary work-out's they have ever done at the NFL level. The Jaguars' staff under Urban Meyer is fiery and vocal -- and that's probably an understatement. I mean, there's a PA announcer literally announcing how much time is left in each period; what the next period entails; and encouraging players.

"He’s yelling and constantly reminding us to bring the energy," veteran wide receiver Marvin Jones laughed. "It’s something that’s different, but it’s something definitely that I like just because it gets everybody going."

Now that we have set the scene, here's what else I saw at this first, open practice:

- As Urban Meyer was very forthright about: rookie quarterback Trevor Lawrence was "great" at Wednesday's practice (closed to the media) and "okay" on Thursday. This was namely due to "red zone emphasis," "a very hard area of the field," per Meyer. As a witness to Lawrence's performance, Meyer is 100 percent accurate in saying that. Lawrence was easily the most accurate quarterback during other team drills (although I would've loved to see him target the deep ball a bit more). Once he got into red zone drills, his passes were about 3-4 feet off target, particularly in the back corner of the end-zone.

With that said: there is no need to panic if you're a Jaguars fan. Because those passes were some of the tightest spirals I've seen thrown at TIAA Bank Field in three years on the Jaguars' beat. Additionally, as several veterans noted after practice, there's 90 guys on the field, including 12 wide receivers and six tight ends. That's a lot of guys to try and get timing down with in a short period of time.

- With that said, Lawrence was easily the best of the four quarterbacks at Thursday's practice. Veteran C.J. Beathard was the weakest (don't get mad at me, Iowa fans). I counted three targets where Beathard's pass sailed five feet over his receivers' head in red-zone drills alone -- although on one of those passes it allowed UDFA wide receiver Josh Imatorbhebhe to showcase his 47 inch vertical jump.

Gardner Minshew clearly has the best timing with receivers of the four quarterbacks (installing the offense with him under-center the past few months will do that). To be frank, what hurts Minshew's performance the most is that he will try so hard to make a play work... and then Lawrence will effortlessly throw a perfect spiral on the next rep. I was pleasantly surprised with second-year quarterback Jake Luton. Thursday was easily the most vocal I have seen him since he was drafted by the Jaguars in the sixth-round in 2020. Also, he grew his hair out. If the Jaguars' quarterback room doesn't win "Best Hair" across the league this year, we've got a problem.

- All 90 members of the Jaguars' roster were in attendance. For a first-year staff, that's critical. With that said, several of the Jaguars still working their way back from injury worked off to the side; that includes 2021 draftees Andre Cisco (ACL) and Tyson Campbell (hamstring). While it's definitely better for these players to gradually work their way back, it's disappointing that they'll remain mysteries for now -- especially Campbell. UDFA linebacker Dylan Moses, fourth-year linebacker Leon Jacobs, cornerback C.J. Henderson, and defensive back Chris Claybrooks were also among this contingent.

- Yes, Tim Tebow was in-attendance. Yes, he did catch a touchdown. He is in great shape. But I did not expect him to be -- noticeably -- the shortest of the six tight ends. And it was the first thing I noticed.

It's not the end-all, be-all. Tebow did run several, strong routes in team drills and just wasn't targeted. But no, to answer all the inquiries about "will Tebow be used like Taysom Hill:" if only for this open practice, he just practiced as a tight end.

"It's one step at a time," Meyer told the media after practice in regards to how Tebow will be used. "Before you start having those conversations, you need to get a feel for where he is on the depth chart."

- Meyer also raved about the Jaguars other tight ends, including new addition Chris Manhertz. Primarily brought in as a blocking tight end, Manhertz had his fair share of drops Thursday, but did wow with a touchdown catch in the back of the end-zone through double coverage.

@HaysCarlyon The TD you were talking about earlier on @1010XL ! pic.twitter.com/TdQzHiSvuy

- And as for the national narrative of whether the Jaguars' locker room would be upset by the Tebow signing: they do not appear to be.

"He has a lot of experiences that are different from other players, so you can ask him questions and learn from that," center Brandon Linder said. "But again, I haven’t seen too much on the field. But hey, if he can help us, so be it. Let’s go, I’m ready.”

"He’s just another guy. I met him briefly just in the locker room, so really [he’s] a really good guy from what I can tell," safety Rayshawn Jenkins said. "But I don’t look at it as ‘Tebow’ or anybody who’s just right there... It doesn’t matter what number the jersey is or whoever’s right there in front of me. I’m just always trying to just work on my toolbox and work on my craft.” 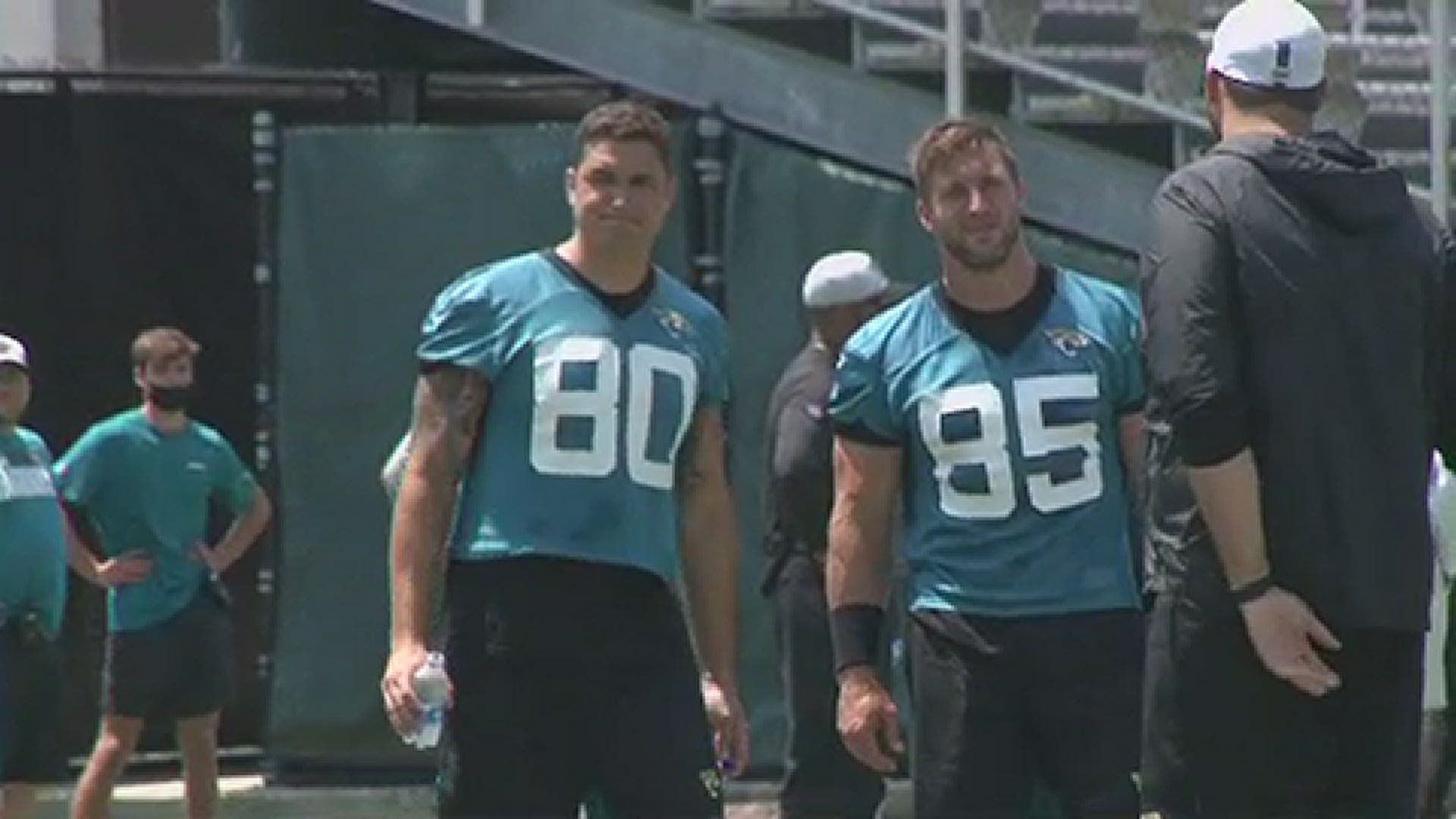 - Free agent signee Roy Robertson-Harris will fill the Big End role that was largely left unfilled in 2020 following the departure of Calais Campbell. He looked ready to seize that role on Thursday. Robertson-Harris worked both inside and outside, position flexibility from an alpha player (if only in their salary, bottom line) that the Jaguars did not have last year. It will free up other defensive linemen -- Josh Allen, K'Lavon Chaisson -- to focus solely on pass rushing, and free up others -- Malcolm Brown, DaVon Hamilton -- to focus on eating space.

- I know he took his old number (and per Jaguars' staffers, was chomping at the bit to do so), but Dawuane Smoot was doing his best Yannick Ngakoue impression on Thursday -- and it sure got my attention. Smoot is listed at 275 lbs, but I'd be curious how much of that is muscle. He's easily the slimmest and smoothest (pun intended, lol) I've seen him in three years. He also primarily practiced with pass rushers like Allen and Chaisson. Smoot has been pulled back-and-forth to basically every position on the defensive line during his career. Can he finally find a home?

- New nose tackle Malcolm Brown is indeed a very large human being. But don't forget about second-year tackle DaVon Hamilton. Considering he suffered a season-ending knee injury with a month still to go in the season, I was very encouraged with how fluid he moved Thursday. He was also the Jaguars' only true nose tackle as a rookie; now, he's got some help and depth.

- Defensive Coordinator Joe Cullen Line of the Day, to fourth-round Edge rusher Jordan Smith: "don't hang your *** head down, Jordan! Don't even let them think you're tired!" I love it.

- Your Taven Bryan update: he did a lot of pass rushing drills. I dunno what that means, but we do easily forget: like Smoot, the former 2018 first-rounder has tried-out nearly every position along the defensive line.

- One last tid-bit about Meyer: as was on full-display during Lawrence's Pro Day in February, he wants to be up-close-and-personal to his quarterback, literally "hearing the sound of the football" zip by. Well, he literally stood on the line of scrimmage during drills today next to support staff holding up blocking bags. That's pretty up-close-and-personal, if you ask me.

1. Yes, Cam Robinson still has his jersey on backwards 😅