The fifth-year quarterback showed improved accuracy, connecting on tight-window throws throughout the day. His placement was off on one or two throws during the workout, but overall he was connecting on passes with regularity. Even Bortles' occasional wobbly passes connected with wide receivers in stride. One wobbler, in particular, was caught by tight end Ben Koyack with a defensive back on his hip.

Most noteworthy, Bortles has built on his chemistry with wide receiver Keelan Cole from last season. Cole made several impressive catches off the starting quarterback's passes on Friday. The Bortles-Cole connection's biggest highlight occurred during 11-on-11 drills, as the wide receiver made an impressive leaping catch in tight coverage across the middle of the field.

Bortles' best throw occurred during the end of team drills. The quarterback placed a perfect deep ball in between two defenders so that wide receiver Donte Moncrief could haul in a 30-yard completion down the left seam. Cornerback Jalen Myrick was a foot behind Moncrief as safety Cody Davis looked to step in front of the playmaker. Both defensive backs made contact but the ball was so well-placed that Moncrief was able to complete the reception on his way to the ground.

That throw was made shortly after Bortles' had a pass tipped at the line and batted into the air for an interception by Davis. It was Bortles' only interception during the first week of OTAs.

Bortles put together a strong week of workouts, which is a good sign, as he isn't typically known as a strong practice player. 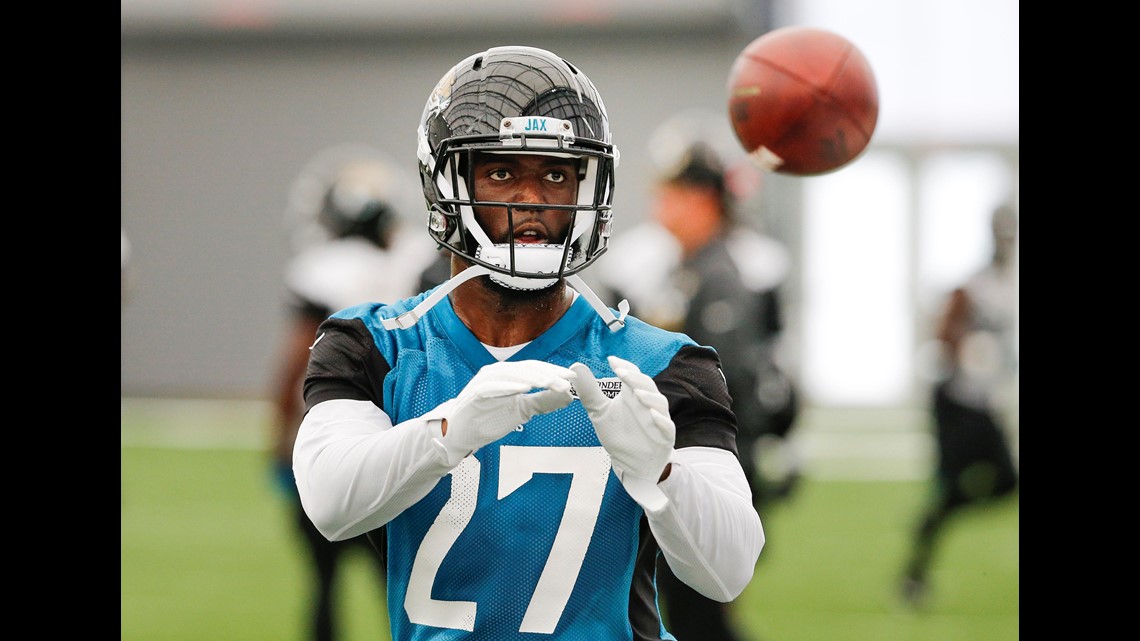 - The Jaguars were without cornerbacks Jalen Ramsey and A.J. Bouye for the third-straight workout, as the pair continued to take advantage of the voluntary aspect of OTAs.

Running backs T.J. Yeldon and Leonard Fournette and wide receiver Dede Westbrook also missed the workout for undisclosed reasons. Yeldon has missed all three OTAs workouts so far. Fournette participated on Tuesday but was not working during the final two sessions of the week. Westbrook was a new absence for Friday's workout.

Fullback Tommy Bohanon, guard A.J. Cann, long snapper Carson Tinker, defensive ends Dawuane Smoot and Dante Fowler remained out of practice as well. As Marrone pointed out on Thursday, those five players are all recovering from various undisclosed injuries. The Jaguars aren't required to talk about injuries during the OTAs phase of the offseason.

Safety Tashaun Gipson and linebacker Myles Jack worked with a trainer away from the rest of the team on an isolated field.

- The Jaguars' starting right guard job may be open to competition. Following Friday's workout, offensive line coach Pat Flaherty said the position will "work itself out." When asked if the job was publicly open to a competition, Flaherty complimented the current starter, Cann, and said he still believes in the fourth-year player.

- Backup quarterback Cody Kessler and second-round rookie wide receiver DJ Chark have developed some legitimate chemistry during OTAs. Kessler frequently targets Chark and the rookie hasn't let him down. Chark made two impressive plays off Kessler throws during the final workout of the week. Chark has done a very good job of keeping his feet in position for sideline catches.

- Enjoy this look at the Jaguars offensive line working on fumble recovery drills:

The most fascinating of all the #Jaguars O-Line drills: Sack-fumble recovery pic.twitter.com/3ky7F63j7o