Former Redskins head coach has "no regrets" from time in Washington, ready to "turn the page" 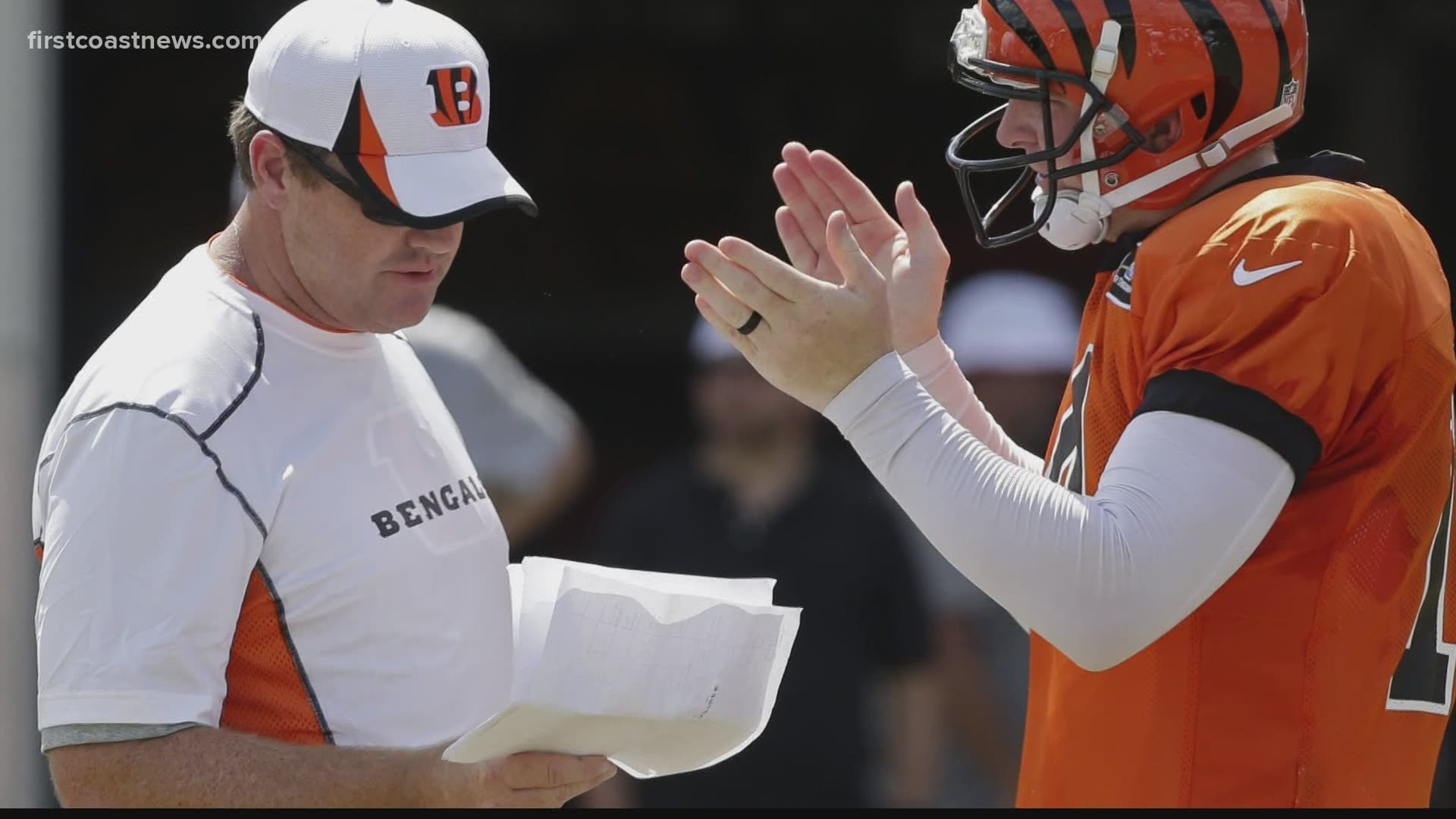 Second chances can be hard to come by in the NFL -- especially a second chance as an NFL head coach. Having led the Jaguars and the Buffalo Bills, Doug Marrone is in rare company; but even then, there was a two-plus year gap in between head coaching gigs.

“I had some time to reflect on my coaching career up at Washington. I got fired after Week 5 so I had some time off. When you take the time off, you beat yourself up a little bit and get all that stuff out of your system and then you’re ready to compete again," Gruden said during his first teleconference with the local media on Tuesday.

"You’ve got to move on and you’ve got to turn the page. This led me to the Jacksonville Jaguars, and Coach Marrone was gracious enough to give me an opportunity to be an offensive coordinator and I plan on taking full advantage of it."

For Gruden, that means going back to his roots as a play-caller and offensive coordinator. Prior to being named Washington's head coach in 2014, Gruden served as the Bengals' offensive coordinator from 2011 to 2013. That era saw the Bengals go from 18th in total offense to 6th, as 2011 second-round draftee Andy Dalton developed under Gruden's West Coast offense.

"This is an opportunity for me to just hone in on the offensive side of the ball again and really put my time and efforts into only offense and trying to make this the best offense I can and utilize the skill-set of all of our players and the team in general, for that matter," he said.

"Coach McAdoo is a great add for us," Gruden said, "he brings that experience of not only being a head coach, but also an offensive coordinator calling plays. It’s going to be great."

So, is Jacksonville becoming "the island of misfit toys?" Head coaching rehabilitation? A club all its own?

"You know, I would love to have a different result in Washington, still be a head coach, but this is where I’m at and I’m excited to take advantage of the opportunity," Gruden said.

In the teleconference, Gruden touched on several areas of football operations that have him fired up for the 2020 season. He was also vocal and detailed about how installing an offense through the "virtual OTAs" has had its challenges.

“It’s still difficult. It’s one thing to install plays on a chalk board and virtual meetings getting to know the concepts and all that stuff, but it’s another thing to go out and execute and see what we’re good at, to see what guy can do," Gruden said. "I don’t have a lot of information as far as how these guys can handle different positions and how to run different routes and all that stuff. I know Dede [Westbrook] plays in the slot, we drafted Laviska [Shenault Jr.], we’ll see what he can do outside and inside. I’d like to move some other receivers around a little bit, Chris [Conley] and DJ [Chark Jr] and see what happens. Then we got Chris Thompson for some backfield stuff, but seeing Ryquell [Armstead] and obviously Leonard [Fournette] do some stuff in the backfield and just get to know everybody and get Tyler Eifert back in the mix and get him moving around and see where Josh Oliver is at and James [O’Shaughnessy].

"We have to get these guys on the field. I think, from a knowledge standpoint, they’ll know the plays and the concepts, but then getting them out there and seeing them execute it."

Gruden said that because "tried to get 40 guys on one line at one time," meetings have been more by position as opposed to the whole offense at once.

"It is good for them to teach it and work with their guys. Coach [Terry] Robiskie took the running backs and Coach [Keenan] McCardell with the receivers and Coach [Ron] Middleton with the tight ends, Coach [Ben] McAdoo with the quarterbacks and I am able to go in and out and Coach [George] Warhop with the linemen. For them to really hone in on their positions and what their task is and when we can come together, we will do more group installs and the walk throughs and the practices. I think it will be more beneficial that way."

Gruden also had high-praise for his new signal-caller, Gardner Minshew. Gruden said he loved Minshew's "competitive spirit" coming out of college, and believes their personalities will work well together.

"He played for four [colleges] I think and was very successful. He got drafted in the later rounds and came out and playing in the National Football League is about taking advantage of your opportunities and Gardner did that. He’s a shining reason why once the opportunity presents itself, you take advantage of it. He did that, and he’s put himself in a great position to take the Jacksonville Jaguars and lead them into the future. He has shown a skillset where he can sit in a pocket, step up, make things happen outside the pocket. He’s accurate, he’s tough and obviously he’s a great leader so he’s got the intangibles you want in a quarterback."

More than once, the two players on the Jaguars' roster that previously played for Gruden -- tight end Tyler Eifert in Cincinnati and running back Chris Thompson in Washington -- came up in conversation.

"When you have a tight end (Eifert) in the back that can do some work in the middle of the field, it really opens things up for guys like DJ [Chark Jr.] and hopefully Laviska (Shenault Jr.) and Chris Conley and some of these other guys, Dede Westbrook. It makes everybody better. Not only to that but the running game as well with Leonard [Fournette]."

Gruden grew particularly passionate when discussing the Jaguars' tight end room as a whole. "When you don't have one, times are tough," he noted -- a reality the Jaguars experienced almost all of last season with injuries to James O'Shaughnessy and Josh Oliver.

"If you look at our successful teams in Cincinnati and in Washington, when Jordan Reed and Vernon Davis played with the Redskins, we were pretty good on offense, really, especially on third down and in the red zone. When those guys didn’t play, you were asked to replace them with some younger guys who aren’t quite as athletic or gifted as those guys. It’s difficult down there. You can double receivers all you want to, it’s hard to double tight ends and tight ends really are a key component down there in the red zone and on third down, and they’re a quarterback’s best friend. You know, the passes don’t have to be 25 yards down the field. They can be option routes, choice routes, inbreaking routes, you know, quicker type element passes if you have that tight end.

"I think Josh Oliver showed a lot of promise as a rookie. Unfortunately, he had injuries. You know, James [O’Shaughnessy] did some good things, but then he got hurt. And then Charles [Jones], the rookie, has shown he has a chance to be a good ‘Y’, he’s a physical kid. We drafted Tyler Davis to be an athletic guy. He can play a little fullback, he can play tight end, he can run, so we are excited to see what he can do. But it’s a key position, and I think Tyler’s going to be a great add for us in getting these guys all on the field and see what they can do. It’s going to be exciting."