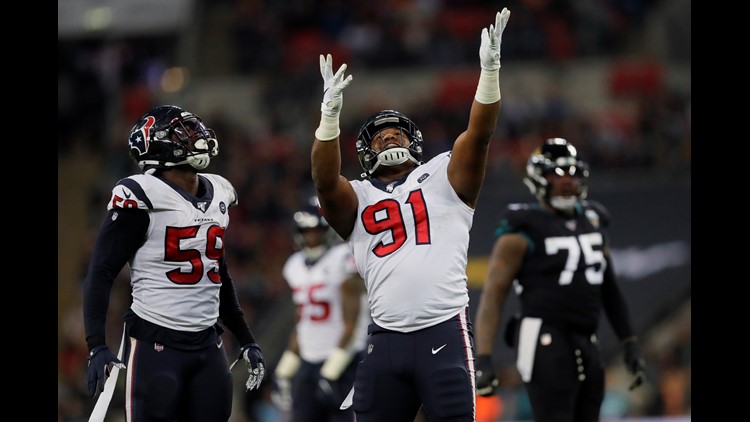 Photo by: AP
Houston Texans defensive end Carlos Watkins (91) celebrates during the second half of an NFL football game against the Jacksonville Jaguars at Wembley Stadium, Sunday, Nov. 3, 2019, in London. (AP Photo/Kirsty Wigglesworth)

No Minshew Magic in London, Jaguars fall to Texans

Another meeting with the Texans, another tough day at the office for the Jaguars' offense -- this one at their "home away from home."

The Jaguars (4-5) fell to their AFC South rivals 26-3 at Wembley Stadium Sunday, their second loss to the Texans this season. It is also Jacksonville's second straight loss across the pond.

Rookie quarterback Gardner Minshew was held to just 241 yards, as the Jaguars offense as a whole only tallied 291 total yards. Things spiraled further out of control for the rookie once the Jags went down by two scores: Minshew was picked off on consecutive possessions and then fumbled while scrambling on a third. Minshew had only thrown two interceptions all season up to this point.

Running back Leonard Fournette, the AFC's leading rusher coming into the day, was held to 40 yards on 11 carries.

On the other side of the ball, NFL MVP candidate Deshaun Watson was electric. Despite decent pressure from the Jacksonville defense, Watson was able to slip and slide his way to a 200+ yard performance through the air, throwing for two touchdowns and adding more than three dozen yards on the ground. Jacksonville only sacked Watson once.

The Jaguars are on a bye Week 10 and return to action at Indianapolis Week 11. Quarterback Nick Foles is expected to be activated off the Injured List at that time, meaning the Jaguars' coaching staff will have a decision to make at quarterback. The Jaguars and Colts are set to kick-off at 1 p.m. EST on Sunday, November 17.