Calais Campbell immediately entrenched himself as a veteran leader after signing a four-year, $60 million deal during free agency last offseason. 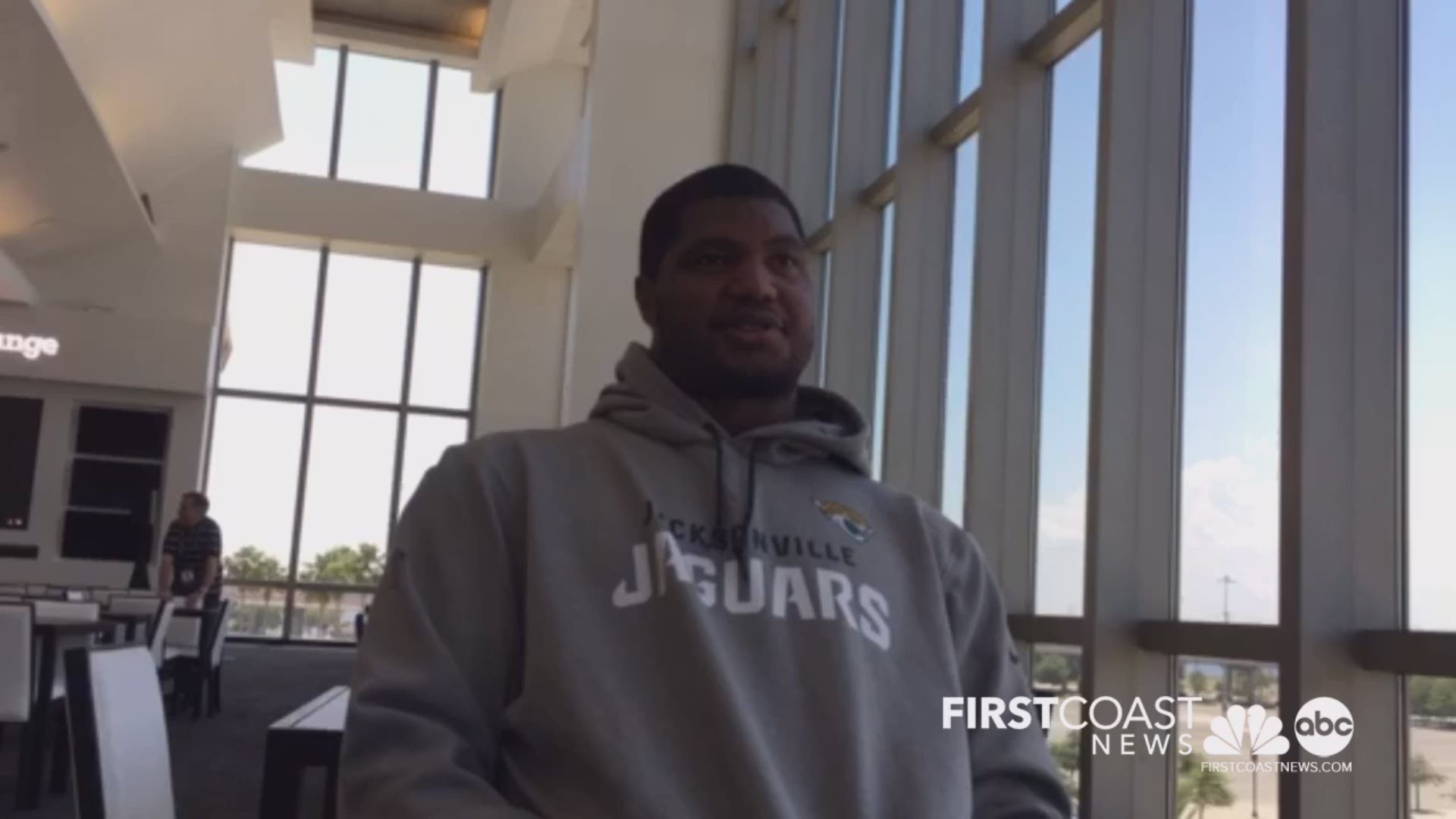 JACKSONVILLE, Fla. -- While Jaguars defensive end Calais Campbell receives plenty of praise for his performances on NFL Sundays, it's the veteran's work in the offseason and in practice that truly makes a consistent mark on his team and individual teammates.

Campbell immediately entrenched himself as a veteran leader after signing a four-year, $60 million deal during free agency last offseason. He helped his fellow defensive linemen with their technique and taught the Jaguars' offensive linemen how to block that approach.

Entering his second offseason in Jacksonville, Campbell will look to add to his mentorship circle with a new batch of rookies and younger players.

"I had a lot of quality guys that were able to help me out a lot when I was a kid, coming into this game [at] 21, 22 years old, just trying to find my way," Campbell said during a conversation with First Coast News on Tuesday.

"I think it's everybody's duty - if you play this game long enough - it's your duty to pass down the knowledge you've learned to keep the game strong."

First-round pick Taven Bryan will be among the rookies who seek out Campbell's advice this offseason and beyond. The young defensive lineman from Florida can play a similar role to Campbell due to their comparable versatility.

The veteran lineman plans to help his new rookie teammate in any way he can.

"I always look forward to teaching all the rookies but it's nice to have a guy who plays my position, who I can give a lot of my information to," Campbell said.

While coaching up his defensive line teammates comes naturally, Campbell is also willing to tutor players at other positions. He is quick to offer suggestions to young players because he has been in their shoes before.

"I give a lot of advice," Campbell said.

"As far as football goes, really just the biggest thing is playing fast. Don't think too much where you start playing slow, because that's when guys get hurt. You've always got to play fast, even if you make a mistake, make it going 100 miles per hour and stay off the ground, that's another way guys get hurt."

1 / 13
Calais Campbell #93 of the Jacksonville Jaguars walks offsides the field after the AFC Championship Game against the New England Patriots at Gillette Stadium on January 21, 2018 in Foxborough, Massachusetts. (Photo by Kevin C. Cox/Getty Images)

Campbell tells his younger teammates to spend their time wisely outside of the game of football. Rookies face a lot of adjustments when it comes to transitioning into a professional.

Campbell wants them to be able to focus on their jobs, while also having fun.

In order to facilitate a balance between football and off-the-field fun, the Jaguars players bowl during their free time. Bowling helps the teammates bond, and in turn, avoid activities that could put a damper on their on-the-field performance.

The Jaguars' off-the-field stress reliever eventually prompted Campbell to link the sport with his charity endeavors.

"I used to do a golf event, and I like golf, but I'm not really as good at golf as I am at bowling, even though I'm not that good at bowling," Campbell said.

"But it's something we do, I already do that with my teammates. My teammates and I go bowling twice a month just to try to work that chemistry, so I figure if I already like bowling, I might as well make a charity event out of it, try to raise some money for a good cause."

Campbell will host his inaugural bowling classic at Main Event Entertainment in Jacksonville on May 15. Proceeds from the event will benefit his Charles Richard Campbell Foundation, which is named for his father. The charity helps empower young people through sports, nutrition, and financial and vocational training.

"I was raised to be a person who pulls other people along," Campbell said.

"We were very involved in the community growing up as kids and it's just who I am. My dad is the reason, he taught me how to be a person who embraced the community and gave back. Even though we didn't have much growing up, we always were involved. For me, I just wanted to carry on his legacy and the things he taught me."