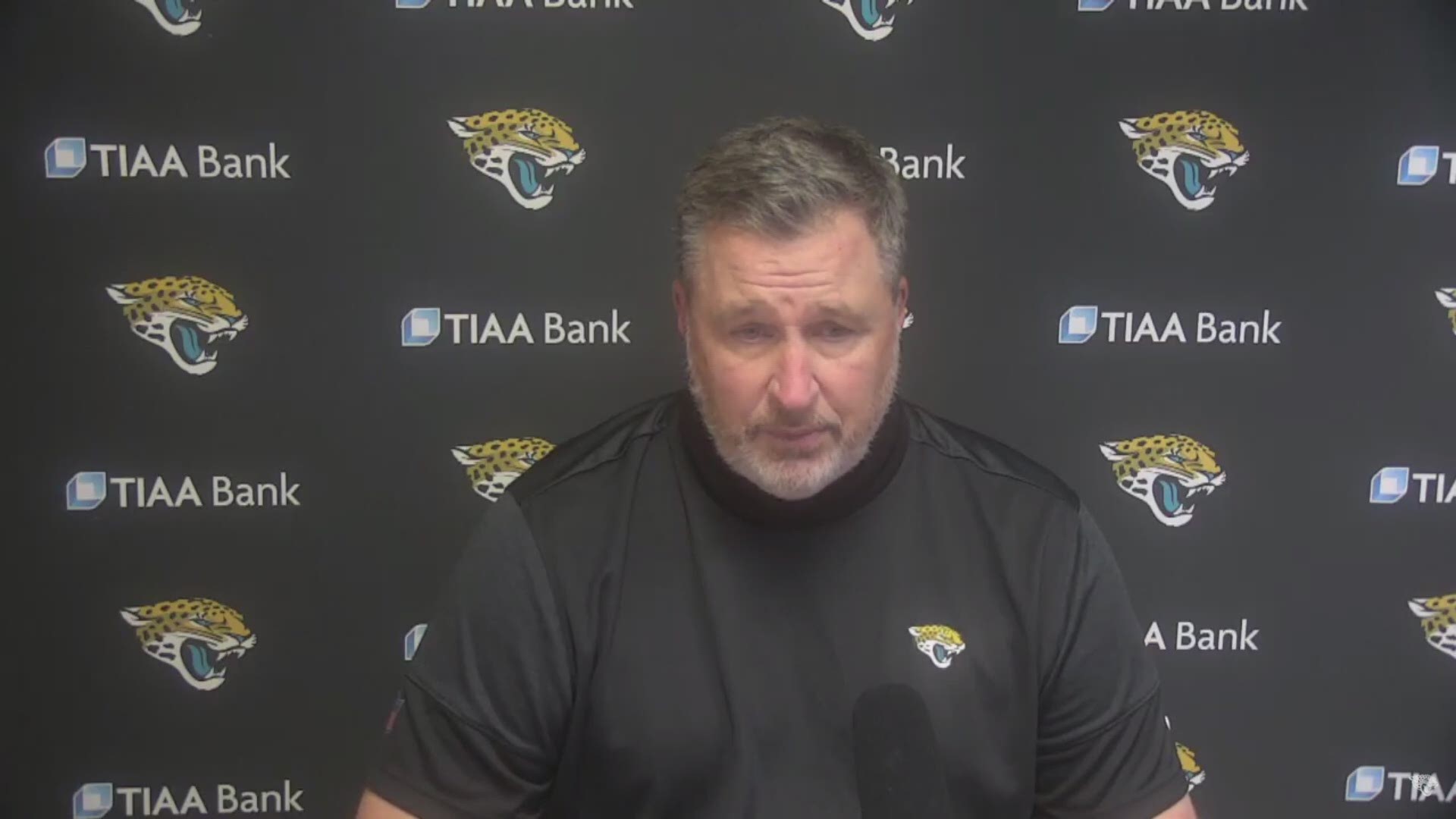 The beginning was inauspicious. The Jaguars allowed the Colts to march right down the field on their opening possession, scoring a touchdown in just seven plays.

The middle saw flashes of brilliance from the youngest squad in the NFL. Jaguars' quarterback Gardner Minshew connected with D.J. Chark and Laviska Shenault for first-half touchdowns. Undrafted free agent rookie running back James Robinson looked like a revelation, rushing for more than 50 yards in his professional debut.

The ending was nerve-wracking: that tends to happen when veteran Philip Rivers gets the ball with under three minutes to play.

But the newest version of "Sacksonville" held tough. 2020 first round draftee C.J. Henderson broke up Rivers' pass on fourth-and-five, and the Jaguars walked off with their sixth straight win over their AFC South rivals at home, 27-20.

"That was the story of the day, [in my opinion]" Minshew said of the defense following the win. "There’s times where we have to pick the defense up, and there’s times they’ve definitely picked us up. I’m super happy for those guys. They really closed the game out. They iced the game and won it for us. That’s what a team win is all about.”

"It was just settling down, getting used to playing football again in an actual game environment, and then I thought our communication was great all day," linebacker Joe Schobert said of the defense's performance. "There’s going to be hiccups, it’s the first game. There’s going to be a lot of un-scouted looks, but I think we did a great job as a whole defense in communicating from the front end to the back end on the stuff we practiced and worked on all week." 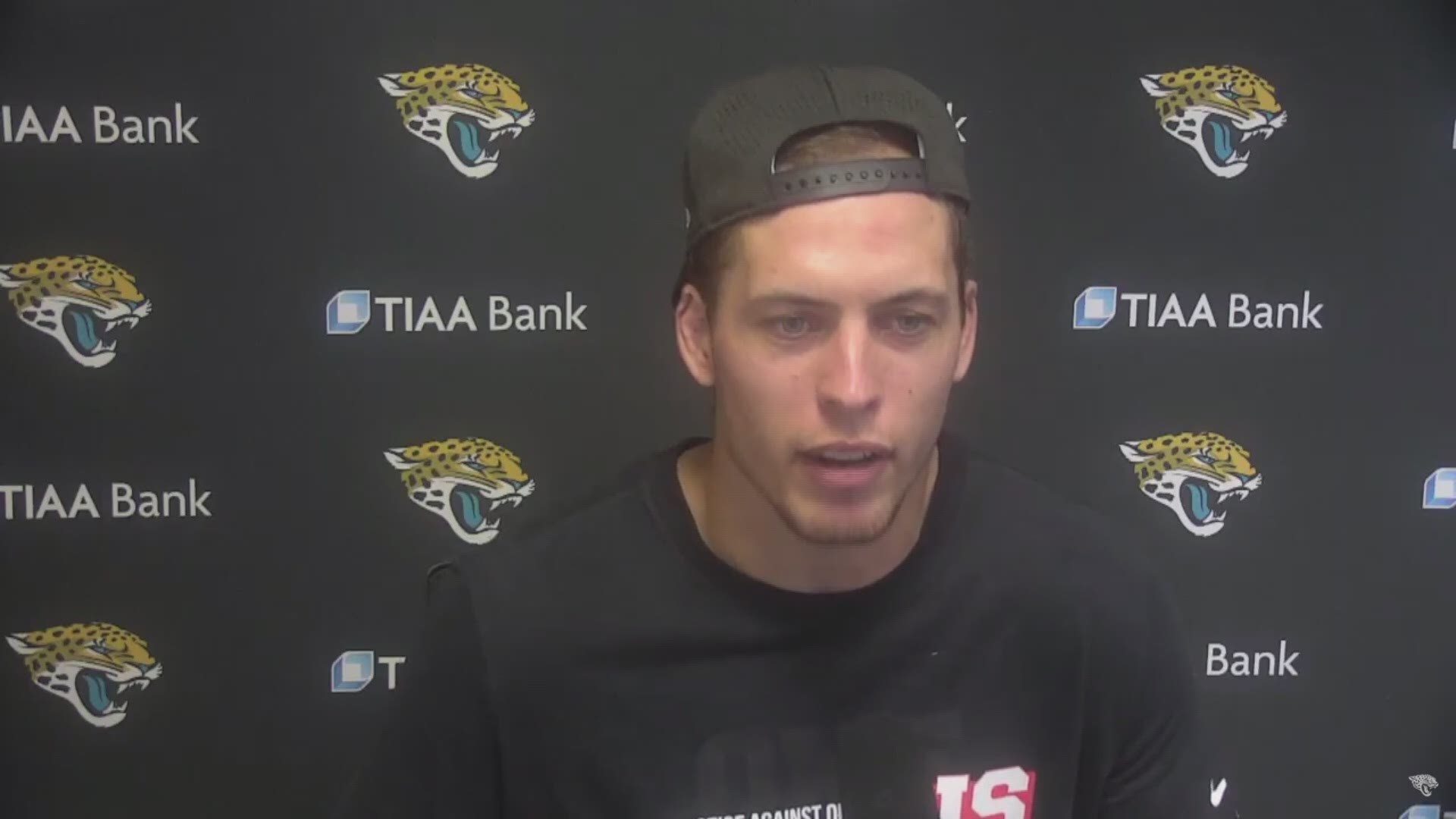 And of course, there was Minshew Magic.

The Jaguars' front office bet on the former sixth-round draftee, trading away veteran Nick Foles in the off-season. He proved them right in game one, completing all but one pass (19 of 20), and throwing for 173 yards and three touchdowns -- including the go-ahead score to Keelan Cole with 5:56 to play. With 47 yards, Cole would prove to be the Jaguars' leading receiver, as Minshew and offensive coordinator Jay Gruden spread the ball around to nine different targets.

“He did a good job with the short-controlled passing game. They had some good play-action stuff," Colts head coach Frank Reich said of Minshew's performance. "He’s always been a very accurate guy. You go back and look at his college tape, he is a very accurate passer. Jay Gruden did a very good job and they executed well on offense.”

Robinson would finish with 62 yards on the ground, and one, eye-popping, 28 yard catch-and-run in which he hurdled two defenders.

“All week, really all camp, we knew what we had in James and we knew he could do it. I’m so happy for him," Minshew said of his rookie running back. "A guy who really got overlooked in the whole process. He is a guy that I identify with. Coming out of high school a very productive player, but didn’t get recruited like he should. Super productive in college, but didn’t get scouted like he should. He’s a great football player and I’m super glad he got the opportunity to get out there and he made the most of it.”

For the second time in three meetings, the Colts' running game continued to give the Jaguars fits. Lead tailback Marlon Mack would exit with an Achilles injury, but not before rushing for 26 yards. In Mack's absence, Nyheim Hines tallied 73 total yards and two touchdowns. In his NFL debut, Jonathan Taylor had 22 rushing yards and 67 receiving yards.

Despite the loss, in his first game as a member of the Indianapolis Colts, Philip Rivers built upon his 7-2 all-time record against the Big Cats. He finished 36 of 46 for 363 yards, a touchdown and two interceptions.

The youngest team in the NFL -- the one that is said to be "tanking" -- is now 1-0. And it was largely thanks to the 24 of 53 players that are entering their first or second year in the league.

“Until you actually do it, there’s a part of it you have to prove it to yourself. We had a lot of rookies and second year players step up and make huge plays for us today," Minshew said. "When they are playing with confidence, you love a young team that plays with confidence. They have the energy. They got that swag about them."

The Jaguars (1-0) travel to Nashville to take on the Titans Week Two.