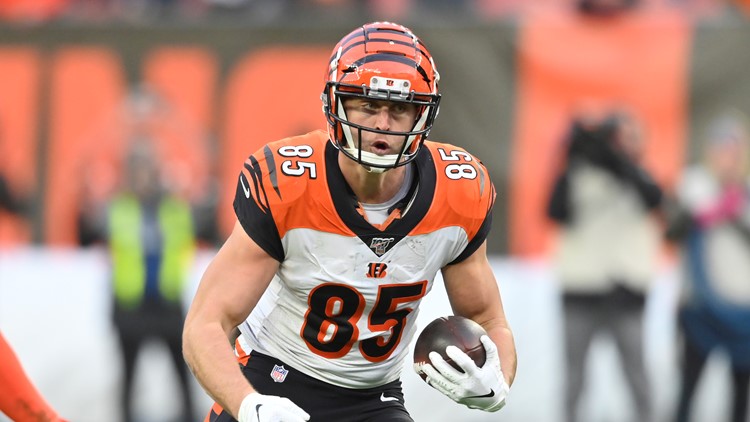 Over a week since the legal tampering period began, the Jaguars have finally agreed to terms with their first free agent on the offensive side of the ball: tight end Tyler Eifert. He reportedly agreed to a two-year deal on Tuesday night.

The 2013 first-round selection has spent his entire, seven-year career in Cincinnati, including a Pro Bowl year in 2015. That year, despite playing in only 13 games, Eifert caught 52 passes for 615 yards and an eye-popping 13 touchdowns.

Injuries have plagued his NFL career: Eifert has played in just 59 games, and has missed 34 contests since the start of the 2016 season. However, he did appear in all 16 games in 2019, hauling in 43 receptions for 436 yards and three touchdowns. 2019 was the only season in his career he played a full season.

Based on those numbers, Eifert, at the very least, adds a veteran voice to a thin, Jaguars tight end room. Seth DeValve and Nick O'Leary both departed in free agency; the Jaguars' leading tight end -- James O'Shaughnessy -- is coming off an ACL tear suffered Week Five against the Carolina Panthers. Even then, O'Shaughnessy has just 60 career receptions -- a mere 17 more than Eifert had all of last year.

The Jaguars will also return 2019 third-round draftee Josh Oliver, who the Jaguars front office has said they hope to see a "D.J. Chark-like leap" out of in his sophomore campaign. Oliver missed 12 games with hamstring and back injuries his rookie season. 2019 undrafted rookies Charles Jones and Matt Sokol are the other tight ends remaining on the Jaguars roster.

There is a familiarity between Eifert and first-year, Jaguars offensive coordinator Jay Gruden, too: Gruden was the OC in Cincinnati during Eifert's rookie campaign. Eifert appeared in 15 games that season, catching 39 of the 60 targets that came his way. He had 445 yards and two touchdowns in 2013.

The Jaguars have not had a tight end record more than 20 receptions since Marcedes Lewis in 2017.