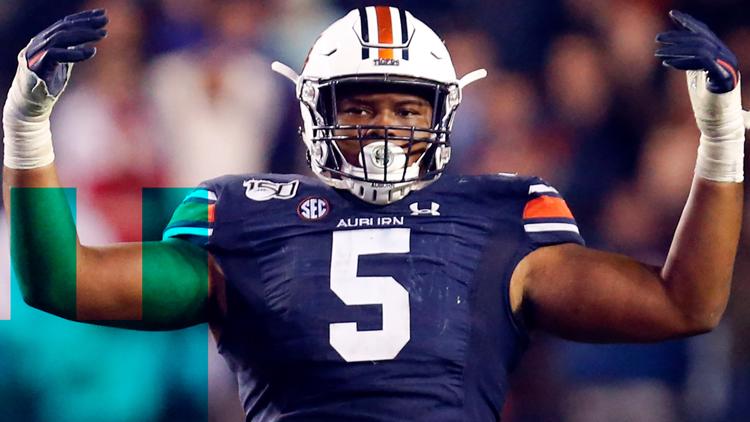 Photo by: AP
Derrick Brown, former defensive tackle at Auburn, is one of the many targets who should be on the Jaguars' radar.

The Jaguars have plenty of holes to fill as they prepare for the upcoming 2020 season. That's why the First Coast Sports team has broken down those positions of need and potential players to fill them via the 2020 NFL Draft.

FILE - In this Nov. 4, 2017, file photo, Notre Dame tight end Cole Kmet, right, runs with the ball against Wake Forest defensive back Ja'Sir Taylor during the second half of an NCAA college football game in South Bend, Ind. Notre Dame football coach Brian Kelly offered freshman tight end Cole Kmet a day off last Saturday. It came 12 hours after Kmet earned his third save of the season, striking out one and allowing one hit in two-thirds of an inning of Notre Dame’s 5-2 baseball victory over Wake Forest. (AP Photo/Nam Y. Huh, File)
AP

Kmet is widely considered the top tight end prospect in this year’s draft. Experience is a question, as he was only a starter for one full-year, and even then he missed three games with a broken collarbone. Kmet caught 43 passes and six touchdowns his junior year; he had nine receptions and zero touchdowns his sophomore year. Like so many tight ends, Kmet was a multi-sport athlete – but not a basketball player: he served as Notre Dame’s closer his freshman year, but suffered an arm injury his sophomore year. Considered a dependable target with room to grow as a blocker.

The son of Pro Football Hall of Famer Randy Moss is easily the highest riser in this year’s class of tight ends thanks to his performance in the National Championship game. And yes, the 2019 season was Moss’ lone season on the field in Baton Rouge (he red-shirted in 2018 and sat out in 2017 after transferring from NC State), but the younger Moss holds LSU’s single-season mark for receptions (42) and receiving yards (534) by a tight end. Sure, two of his four touchdowns on the year came in that title game with Clemson – and a third game in the semifinal game with Oklahoma – but Moss is projected as a more traditional, in-line tight end anyway. He can certainly win underneath and move the sticks, but his blocking is where he is most effective; and with genes like his, maybe the best is yet to come in the receiving game.

Purdue tight end Brycen Hopkins (89) runs in for a touchdown against Purdue during the first half of an NCAA college football game in West Lafayette, Ind., Saturday, Nov. 30, 2019. (AP Photo/Michael Conroy)
AP

Almost went with another tight end here, but Hopkins is easily one of, if not the, best receiving tight end in this year’s class – and that’s the type of tight end the Jaguars need. His Boilermakers were never the class of the Big 10 West, and yet Hopkins still racked up 130 receptions, 1,945 yards and 16 touchdowns in four seasons. With that said, he is not the best blocker, but does show great upside with his effort and size. He was in West Lafayette for five seasons and played in the 2020 Senior Bowl – both are trends among Dave Caldwell’s previous draft selections, including last year’s third-round draftee, tight end Josh Oliver.

As the Jaguars first-round draftee Josh Allen proved last year: sometimes coming back to school for your senior year can make the difference between being a possible first-round draft pick and being a surefire, Top-10 talent. Brown is hoping to become the next in that trend. Regarded as the most complete interior defensive line prospect in this year’s draft, Brown racked up 54 tackles, 11.5 TFL and four sacks in his senior season “On The Plains.” He is a tackling machine, something the Jaguars sorely need after their once heralded defense struggled mightily against the run.

A star at this year’s Senior Bowl (an event Jaguars GM Dave Caldwell is known to put a heavy emphasis on) and regarded as the second-best, interior defensive line prospect in this year’s draft, Kinlaw is, as one analyst puts if, “a rocket.” A monster in gap coverage, Kinlaw is also highly regarded as a pass-rusher, something the Jaguars could need depending on what moves they make in free agency (Yannick Ngakoue, Calais Campbell, etc.). Endurance and mental game processing are biggest question marks; a lot was asked of Kinlaw at South Carolina, where he totaled 35 tackles, 6 TFL, and six sacks in 2019.

His stock fell following a step back in his senior year (Davis saw his tackles drop from 55 to 47 in 2019, his TFL from 5.5 to 3), but the third-year starter also played in “only” 12 games. Then again, some experts hoped to see a bigger jump between his sophomore and junior years; Davis racked up 69 tackles, 10 TFL and eight sacks in 2017. So, the power and length are there. The consistency remains in question.

As he showed in the National Championship, Simmons is a linebacker only in name: he can line up seemingly everywhere. Strong safety, nickel, MIKE, SAM – you name it, this versatile athlete is there. Equally strong against the run as he is in pass-rush, Simons racked up an eye-popping 104 tackles (16.5 TFL) and eight sacks in his red-shirt junior season. He has a championship pedigree, playing in the two of the last three National Championships and three straight CFB Playoff Semifinals.

The Jaguars say Myles Jack is their middle linebacker. Could the three-year starter at Oklahoma change their minds? Although his tackles dropped from 155 (!!!) to 102 from 2018 to 2019, Murray’s TFL numbers improved (12.5 to 17). All that against complex, pulling Big 12 offenses. He does struggle between the tackles, and many analysts have suggested a move to weak-side linebacker. So maybe Myles Jack is the Jaguars middle linebacker… with Murray among his sidekicks.

Part of the 2020 National Champion Tigers heralded defense, Queen saved his best for last, registering eight tackles in both the CFB Playoff Semifinal and National Championship and 4 TFL. Considered a pure, sure tackler, Queen jumped from just 40 tackles in 2018 to 85 in 2019, his first year as a full starter. That small sample size and his length are reasons scouts may look the other way, but LSU has begun to develop a pipeline for linebackers, with Devin White, Kwon Alexander and Deion Jones going on to have success at the next level.

Does a Top-Five projected draftee fall to the Jaguars yet again? Well, Bleacher Report’s Matt Miller says Okudah is “the top cornerback talent since Jalen Ramsey,” so it would only be fitting – although scouts also note how “mature, humble and hardworking” Okudah is, so don’t panic, Jags fans. Okudah comes from a long-line of DB’s at Ohio State: the Buckeyes have had at least one defensive back drafted since 2014, with all but two of those years featuring first-rounders. That’s the only reason Okudah was not a three-year starter in Columbus. He shines in man-coverage but is scheme-versatile. He recorded all three of his career interceptions his junior year, while also registering 34 tackles.

Florida defensive back CJ Henderson (1) rushes the line of scrimmage during the first half of an NCAA college football game against Miami Saturday, Aug. 24, 2019, in Orlando, Fla. (AP Photo/Phelan M. Ebenhack)
AP

“Underperformed his junior year” but “is gonna test off the charts” has been a common refrain from Gators fans when referring to the freakishly athletic Henderson. Injuries limited him to nine games in 2019, but he did double his career high in passes defended (11). Football IQ and ball skills are among his most coveted attributes, while tackling remains a question. The other thing going for him: two of Dave Caldwell’s seven, first-round draft picks while with the Jaguars have been Florida Gators.

Will an NCAA suspension for testing positive for PEDs his sophomore year result in a Draft Day plummet? That was in 2017, and since then, Fulton proved to be a consistent leader on a national champion team. He started all 15 games in 2019, registering 38 tackles, one interception, and a team-high 14 pass break-up’s – more than Thorpe Award winner Grant Delpit and heralded freshman Derek Stingley.