TALLAHASSEE, Fla. - If Jaguars cornerback Jalen Ramsey served as the team's general manager, he would already have his card filled out for the fourth overall pick in this year's NFL Draft. 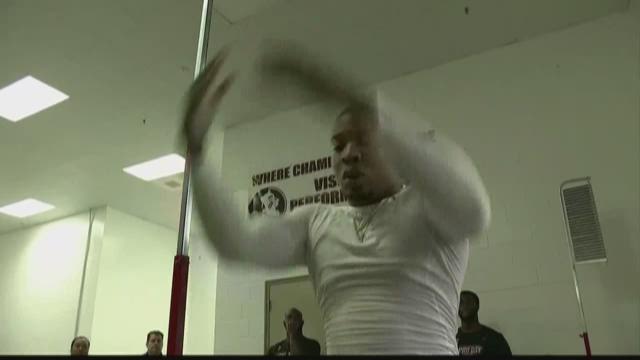 TALLAHASSEE, Fla. - If Jaguars cornerback Jalen Ramsey served as the team's general manager, he would already have his card filled out for the fourth overall pick in this year's NFL Draft.

It would read: Dalvin Cook, running back, Florida State University.

"He brings everything, he's an alpha," Ramsey said of Cook. "He's a leader in every aspect. You can turn on the film and see everything about [his] game, but what you all don't see is the impact that he makes on everybody's job, on everybody in the locker room. That's why I'm lobbying for him."

Ramsey spent two seasons with Cook at Florida State. The two remain close and Ramsey believes he is the best running back in the class.

"It's tough," Ramsey said. "He's playing with nagging injuries, still going out there and running for 200-plus and three touchdowns on a bad hamstring, on a bad shoulder, maybe at the same time. Just that fire, that determination, it rubs off on everybody."

Ramsey mentioned his new favorite catchphrase "four at four" several times during Florida State's pro day. He would like the Jaguars to add not only Cook, but several of his former teammates to the roster.

"I like Dalvin at four, DeMarcus [Walker] at 35, [cornerback Maquez White] in the third round," Ramsey said. "[Fullback] Freddie Stevenson, bring him on. [Wide receiver] Kermit Whitfield [is] fast, bring him on."

Ramsey wasn't the only member of the Jaguars at the pro day. Director of Player Personnel Chris Polian and former fullback-turned-scout Greg Jones were in attendance.

On Tuesday, Cook improved his 4.49-second 40-yard dash time from the NFL Combine. During the pro day, he ran in the lower 4.4 range. I had him clocked at 4.39 on his first run. He ran an unofficial 4.47 on the second attempt.

Cook be nimble, Cook be quick, Cook does position drills at #FSU. pic.twitter.com/zNP5bm2OJi

Cook did more than just show off his speed and quickness in front of scouts. He also displayed fluid footwork and sticky hands.

I asked him about Ramsey's "Cook-to-Jaguars" campaign. He was flattered by the support.

"It's big," Cook said. "[The Jaguars] took Jalen high in the draft, so they will probably rely on him to get good advice about me. So to have him say that about me, it's a great experience."

Walker makes the most of his drills

Jacksonville native and Florida State defensive end DeMarcus Walker posted a positive showing at his pro day. After only taking part in the bench press drill at the NFL Combine in February, Walker took on every test in Tallahassee.

"I prepared well," Walker said. "This is my life. This is something I've been doing since Day 1. Coming in here literally - when I woke up this morning I was happy - cause I knew what I was going to put on display."

The pass rusher produced 16 sacks last season and has caught the attention of NFL scouts. He ran in the 4.8 range for his 40-yard dash attempts. He also posted a 9'7" broad jump.

"I just keep pushing myself to get better every single day," Walker said. "I want to be the best and I have to earn it. Nothing is given to me. That's one thing when I workout, I keep a mental thought in my head: 'you've got to earn it.'"

Walker plans to be in Jacksonville for the draft. He said he is willing to play for any team that takes a chance on him.

- Fullback Freddie Stevenson had a strong day, showing off good hands and posting a 9'4" broad jump. He was watched by Jones, a Florida State alum, who offered a similar skill set as a prospect. Stevenson said he modeled his game after the great FSU running backs like Jones.

- Offensive tackle Roderick Johnson also seemed to impress scouts. He offered up a 8'7" broad jump that drew a positive reaction from the crowd of onlookers.