Florida State routinely offers up talent to the next level and the Jaguars have consistently invested draft picks in the Seminoles' standouts over the last few years. 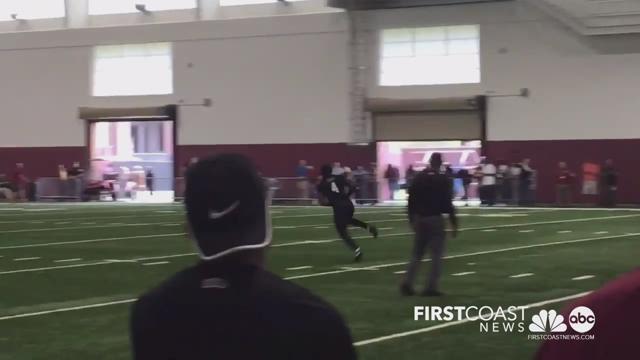 With the early hysteria of free agency over and done with, the NFL's focus now primarily shifts back to April's draft.

Florida State routinely offers up talent to the next level and the Jaguars have consistently invested draft picks in the Seminoles' standouts over the last few years. Linebacker Telvin Smith, cornerback Jalen Ramsey and wide receiver Rashad Greene have all joined the team under general manager Dave Caldwell's control.

First Coast News' annual pro day tour kicks off in Tallahassee on Tuesday. There will be several prospects to keep an eye on as FSU has one of the largest classes in the entire selection pool.

The Seminoles' best defensive back since Jalen Ramsey is the jewel of this year's FSU draft class. It will be interesting to see if James skips out on most of the drills because of his strong NFL Combine performance. He should be a Top 20 pick (at worst) in April.

The undersized defensive tackle will need to show his burst and strength in Tallahassee. If he can improve upon his performance at the NFL Combine, he may force a team to fall in love with him. He will need to make up for his limited athleticism with a strong performance in the position drills.

A long, lanky pass rusher, Sweat needs to show he can play in space as a 3-4 outside linebacker. If he is trying to show some versatility, he will have to display strength and lose hips to impress 4-3 teams looking to add a pass rusher. Sweat is likely to be a Day 2 pick, but he may be able to work his way into the late first round.

The big red-zone target could really help himself with a strong pro day performance in Tallahassee. He isn't the best route runner, so showing he can get open with speed will force scouts to re-evaluate his college tape. He has to prove that he is more like Plaxico Burress than Ramses Barden.

Tate had a strong junior year, posting 40 catches for 548 receiving yards and 10 touchdowns. Those numbers should also help him during the draft process.

The Jaguars need depth at strong-side linebacker and Pugh's measurements fit into the position. Pugh has to show some athleticism during drills at FSU this week to improve his value. A likely late-round pick, Pugh could be a low-risk, high-reward addition for a 4-3 team this offseason.

Potential Diamonds in the Rough

The NFL needs tight ends who can block well in 12 personnel and Izzo fits that mold. While he isn't much of a pass-catcher, Izzo's blocking ability should get him a look from teams around the league. A strong pro day would go a long way in adding to his appeal.

Linebacker depth has become scarce across the NFL. Thomas offers upside as a potential weak-side linebacker. His work on Tuesday could determine whether or not he is selected on draft weekend.

Marshall has good size for an NFL safety. During the pro day, Marshall will need to perform well during position drills. He is likely to be a backup safety in the NFL, so his speed will also need to be highlighted in his performance for special teams work.