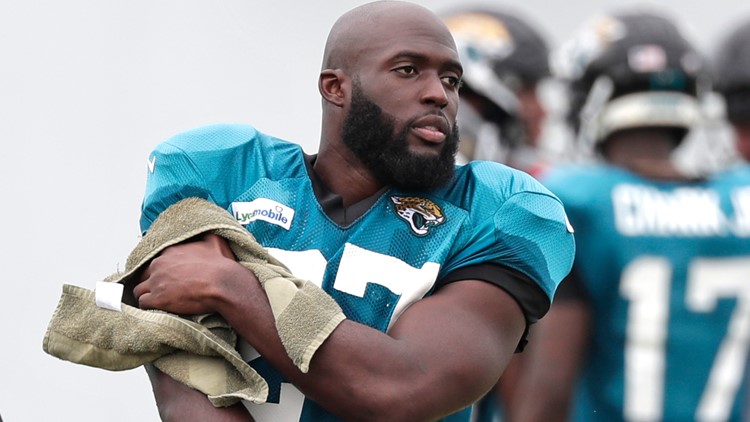 JACKSONVILLE, Fla. —
This script reads like the next movie in the “Rocky” franchise.

Jaguars’ running back Leonard Fournette suffers the ultimate “sophomore slump.” A nagging hamstring injury. His contract guarantees voiced after a fight on the field. Executive Vice President Tom Coughlin calling him out publicly for pouting — and then an “intervention” with Fournette at season’s end.

And then, Fournette makes a change.

Off to Wyoming, the former first-round pick goes, reuniting with his former strength coach during his time at LSU. Thrown into harsh workouts and even harsher, wintry conditions; Fournette had never lived outside of Florida and Louisiana before this winter.

His body-transforming, Fournette decided to make a change in his personal life, too. He went back to his hometown of New Orleans, yes, but with two goals in mind: cut out the “toxic” friends — even those who’d been in his life for 20+ years — while also giving back to the community that raised him. His focus is on his two children and the 2019 season.

But will this movie have a happy ending?

“I don’t wanna say anything now. Everyone has reported to Training Camp in shape, at the proper weight,” the Jaguars head coach said in August. “We’ll see” would remain the fourth-year head coach’s mantra with regards to Fournette (and most of the Jaguars) all summer long.

Fournette was more forward about the strides he’s made.

“Calais [Campbell] told me, ‘this is year three [for me]. This is when we see what players are made of,” Fournette said.

We’ll see almost immediately what Fournette and the Jaguars offense is made of: the three tailbacks behind Fournette on the depth chart have a combined, five career snaps. Offensive Coordinator John DeFilippo has stressed all pre-season that the Jaguars “need [Fournette] to play a lot of football.”

A strong week one fest awaits: the AFC-favorite Kansas City Chiefs come to town right out of the gate.

Which Leonard Fournette will we see?