There were notable discrepancies between the finalized version of the report and an earlier draft version that had been released. 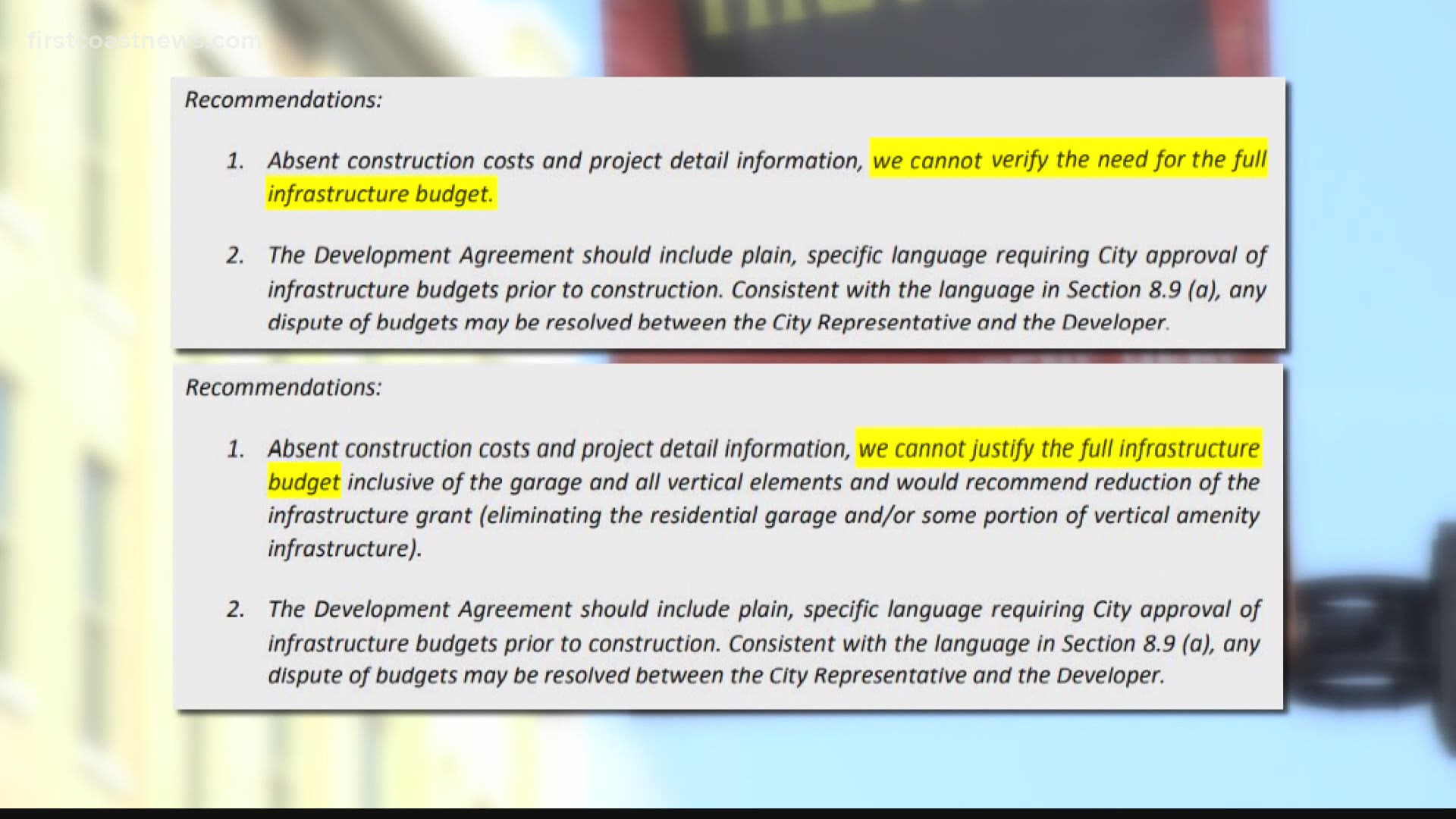 JACKSONVILLE, Fla. — Ahead of a meeting in which the Downtown Investment Authority (DIA) will vote on recommending approval or denial of Lot J to Jacksonville City Council, the agency's staff analysis is calling some of the proposed development's terms into question.

In the report, which was released first in a draft version but later Tuesday as a finalized document, DIA criticizes elements of the deal like the $98.2 million infrastructure budget and the $65.5 million interest-free "breadbox" loan.

"Our analysis of financial feasibility and construction costs, based on the information provided, does not reveal a need for this additional incentive as currently structured," agency staff wrote regarding the loan.

Similar to criticism of the infrastructure budget, discrepancies between the draft version of the report's recommendation on the "breadbox" loan and the finalized version's recommendation are minor but not insignificant.

In the draft version, staff advise to significantly reduce or restructure the loan as a more traditional loan. However, in the final version, that specific line is removed, and only the base criticism of the loan remains.

Credit: WTLV
Draft version of recommendation on "breadbox" loan, with suggestion for reduction or restructuring.

However, in the draft version, DIA makes a specific recommendation to reduce the infrastructure grant. The finalized version struck that line, but both call for "plain, specific language" that would require city approval of infrastructure budgets.

Credit: WTLV
The draft recommendation on the infrastructure budget at Lot J.

Other criticisms by DIA include the classification of office space in the "Live!" component of Lot J, the agreement's "reconciliation language" and what would happen to certain grant funds if minimum developer investment is not met, along with the terms of the developer's lease at the "Live!" venue.

Ultimately, DIA staff recommended "approval with conditions," saying the project could have a "tremendous positive impact" and that the agency's report does not take into account "larger economic impact" of Lot J.

Within the past nearly two weeks, some councilmembers have expressed concern that the process is being rushed through.

Councilman Aaron Bowman, a supporter of the project as it stands, said he disagrees.

"I think we're in a pretty good position right now," Bowman said. "I think we would work for another six months and not get anything better and lose a good opportunity."

When asked if he thinks approving Lot J before stadium renovations or a Jaguars lease extension are secured would put the city in a tough negotiating position for stadium upgrades, Bowman said, No."

Bowman said he thinks the city would be in a better position because Jags owner Shad Khan would have demonstrated his interest in investing in Jacksonville.

"If we had five other developers looking to invest $500 [million] to a billion dollars in the city, then we could go, 'Yeah, let's look at the next one.' This, we don't," Bowman said. "You can see when we did the [request for proposals] for the Shipyards, we didn't get a whole lot of responders saying 'We want to invest a lot in Jacksonville.'"

Council will meet again Thursday afternoon as a whole to discuss Lot J. Council Auditor Kim Taylor's office is also expected to release a report ahead of that meeting.

Lot J could be approved or denied by council as early as next Tuesday.