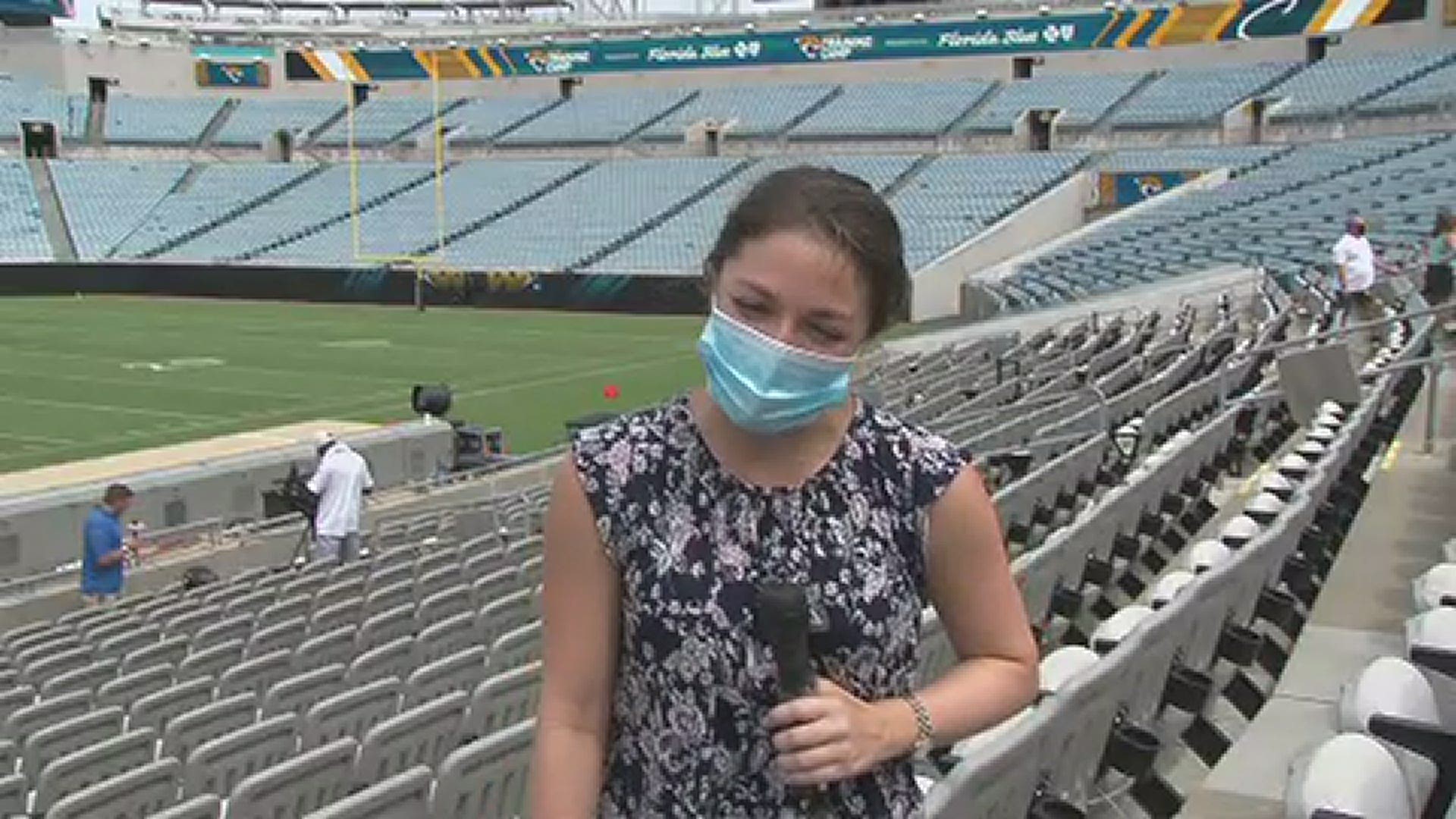 Ultimately, however, the Jaguars assigned Lazard to their practice squad; he was eventually claimed by the Green Bay Packers, and went on to catch 35 passes and three touchdowns in 2019.

This year, the Jaguars drafted 6'6'', 220 lb wide receiver Collin Johnson. Johnson was issued the number 19. The former Big 12 stand-out is easily the biggest-body in the Jaguars' wide receiver room.

... they're not going to make the same mistake twice. Don't worry, Jaguars fans.

After an eye-popping final day of formal training camp, Johnson is making the Jaguars' 53 man roster.

Johnson was the easy headliner of Saturday's intrasquad scrimmage, the first time the 2020 Jaguars took to the game field at TIAA Bank Field. Five drives into the game, the Jaguars' offense had just six points and several highlight catches from Johnson to show for it. It was only fitting then that it was Johnson who hauled in the first touchdown of the day, a 35-yard, over-the-shoulder dime from Josh Dobbs.

"My dad, who played 10 years in the NFL, always preached to me, that you’re going to have to prove yourself each and every day; nobody cares what you did in the past, they care about what you’re going to do for them today. So I brought that mindset into camp, and it's definitely helped me," Johnson said after practice during a previously-unscheduled media availability.

Johnson narrowly missed a second touchdown on the final play of the day. He made an incredible, acrobatic play across his body to catch a jump-ball pass from rookie Jake Luton, but couldn't bring it down over Tremaine Brock.

“If you’ve been out there and watching practice, I don’t think what happened today would make you say, ‘Where did this guy come from?’ He’s been very consistent and done a really good job," head coach Doug Marrone said of Johnson.

Marrone also revealed that in scouting ahead of the 2020 NFL Draft, he had gone in with the mind-set of discovering "different bodies" for the Jaguars' wide receiving room. Johnson was one name on his list.

"[I] looked at the senior year and said ok, but when I went back and looked at junior year, I was like 'woah, I really like this guy,'" Marrone explained. Johnson caught three touchdowns and 559 yards in seven games his senior year at the University of Texas; he had seven touchdowns and 985 yards his junior year. "Having gone back two years on him, that’s what really helped me. I really think this guy has a chance."

"The true character of a man comes out when times are hard, not when times are easy," Johnson added. "Everyday my senior year, I showed up and tried to be a good leader for my teammates and continue to improve whether people noticed it or not. I knew I would get an opportunity, whether it be in the first round, fifth round like I was, undrafted, I didn’t know at the time but I knew I would get an opportunity and I believed in it."

Johnson also caught a key third-down along the sideline from Gardner Minshew to keep the opening drive alive -- high-pointing the ball over fellow rookie C.J. Henderson; another, 30-plus yard, over-the-shoulder catch from Luton; and a slant route back across the middle for a first down from Luton.

The Jaguars began the 2019 season with six wide receivers on the roster; at this point, they're going to have to do the same in 2020 to preserve the talent they have. Terry Godwin, who also caught a touchdown in Saturday's scrimmage, appears to be the odd, seventh man out of a potential, six-player wide receiver corp of Johnson, Pro Bowler D.J. Chark, Chris Conley, Dede Westbrook, Keelan Cole, and Laviska Shenault. Godwin spent the 2019 season with the Jaguars' practice squad.

If the Jaguars' aren't careful, Godwin could end up going the same way as Lazard: from practice squad, to another team, to yet another "what could've been" in Jacksonville.

The Jaguars' starting quarterback had only thrown five interceptions all of training camp up to this point. He threw a pair in the first hour or so of practice Saturday: one at the hands of linebacker Joe Schobert in 7-on-7 (Schobert's second pick of Minshew this summer) and the other a pick-six by nickel cornerback D.J. Hayden on the first play of Minshew's second drive of the scrimmage.

Minshew also struggled in two-minute drills, even when paired with his three, longest-tenured receivers in Chark, Conley and Cole.

After being spelled by his back-up's, Minshew returned for red-zone drills -- or the "second-half" of Saturday's scrimmage -- with much better results. He connected with D.J. Chark for a 13-yard touchdown and came back to find Chark later in the drive, throwing Chark into space on a great slant route with touch.

But still: another sixth-round rookie with potential? Seriously? Dave Caldwell's got a new calling card.

Like Minshew, it was an up-and-down day for the rookie Luton out of Oregon State. He began the scrimmage with the aforementioned darts to Johnson, but he saw his opening drive end with an interception at the hands of Joe Giles-Harris in the end-zone. Luton displayed the same zip on his passes during red-zone drills, but overthrew his receivers twice. He was also sacked by Cassius Marsh and Josiah Scott; Luton also was under-center when the Jaguars' had their lone, false start penalty of the scrimmage -- a positive, Doug Marrone noted after practice, considering the league-leading number of penalties the Jaguars accrued in 2019.

Veteran Mike Glennon did himself no favors on Saturday, going three-and-out on his first two drives of the day. Despite tremendous protection from the Jaguars' starting offensive line, he still managed to miss D.J. Chark twice on his third drive -- on one occasion, throwing more than six yards behind Chark. He had a little more success on his subsequent drives, but even then had to get some luck: Glennon's pass was batted at the line of scrimmage on one play, but somehow landed in James O'Shaughnessey's waiting arms. Glennon did throw touchdowns to Chark and Godwin.

Which leaves us with Josh Dobbs, who, in terms of consistency, had the best day of all four quarterbacks Saturday. As mentioned, he found Johnson for a picture-perfect touchdown. Dobbs also linked up with D.J. Chark in 7-on-7 drills for an over-the-shoulder dime that we've grown accustomed to seeing Minshew-Chark connect on. And Dobbs showed some of his own "Minshew Magic" more than once in escaping the pocket. Off the field -- and even after struggling during two-minute drills -- Dobbs individually went around to every player that had taken part in his drive and fist bumped them on the sideline post-drill. That's the type of leadership Jaguars' management has been craving.

Doug Marrone stressed after practice that the decision will come down to the full body of work, and the rotation today was solely based upon helping each quarterback reach an equal number of reps for the entire summer. Gruden says if he made the call, he's keeping three quarterbacks.

- In addition to the aforementioned sack of Luton, Cassius Marsh added a sack of Glennon. Josh Allen also added two TFLs; the pair were the Jaguars' biggest pass rushing threats, although both Caruan Reid and Doug Costin broke through to the backfield on more than one occasion. Reid met Devine Ozigbo for a TFL at the line of scrimmage.

- While they struggled to stretch the width of the field, Leonard Fournette and Ozigbo continued to find holes and succeed north-to-south in the running game. Rookie James Robinson saw many of the snaps during red-zone drills; Robinson is built like Fournette, a punishing bulldozer of a runner. Ryquell Armstead was given the day off Saturday.

- The dynamic of the defensive backs group in their opening practice period was curious: former undrafted free agents Andrew Wingard and Jarrod Wilson led the group out of the tunnel, with No. 9 overall selection C.J. Henderson the final player to enter. Wingard and Wilson were the first duo through every drill; Henderson went alone and last, and, at one point, coaches were ready to go on to the next drill before Henderson had completed his last rep. Henderson had to waive and acknowledge his prescience. Certainly, this could be attributed to Henderson missing four practices with an undisclosed illness, but it was curious to see the first-rounder in the back of the pack. For Wingard, his continued leadership and dominance in special teams only further solidifies his chances of making the team once again in 2020.

- Linebacker Dakota Allen, Armstead, Taven Bryan, Brandon Linder, Daniel Thomas, Dede Westbrook, and Quincy Williams were all held out of Saturday's scrimmage; rookie wide receiver Laviska Shenault was a late addition to that group and did not play either. Marrone stressed that, if Saturday was an actual game, both Shenault and Linder would've been able to play. He said their absence Saturday was solely "maintenance" related. Marrone also noted he hopes to have "players that haven’t been out there... back on the field and be able to go Week One."

- The Jaguars will cut their roster from 80 players to 53 one week from today, Saturday, September 5. 16 additional players will be featured on the team's practice squad.