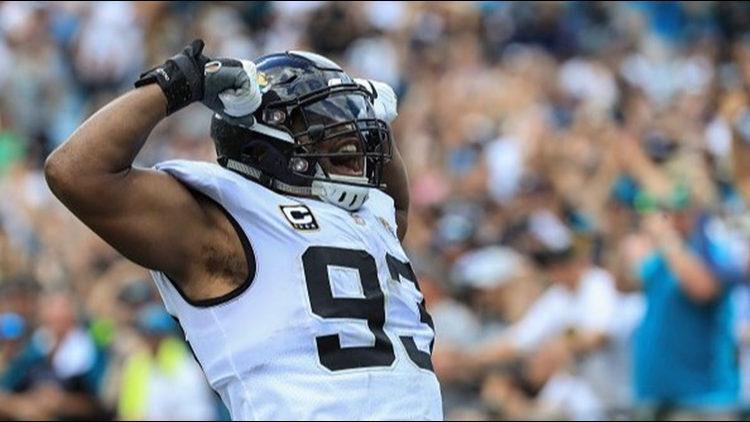 SEPTEMBER 30: Calais Campbell #93 of the Jacksonville Jaguars celebrates a safety during the second half against the New York Jets at TIAA Bank Field on September 30, 2018 in Jacksonville, Florida. (Photo by Sam Greenwood/Getty Images)

ORLANDO, Fla. — Jaguars defensive end Calais Campbell wants to get back to the playoffs so badly that he’s willing to restructure his contract.

Campbell has already had discussions with the Jaguars and acknowledged that it could happen.

″I think it’s more with restructuring with an extension,″ Campbell said after Wednesday’s Pro Bowl practice at Disney’s Wide World of Sports. ″That’s the only way to do it and that’s something that was talked about that could possibly happen.″

Campbell has made a tremendous impact on and off the field since his arrival in Jacksonville, though.

Earlier this month, Campbell became the first Jaguars player to win the Bart Starr Award, which recognizes one NFL player who best represents outstanding character and leadership in the home, on the field and in the community. Campbell will be presented the award on Feb. 2 as part of the Super Bowl events leading to the Feb. 3 in Atlanta.

Now, he’s back playing in the Pro Bowl for the fourth time since 2014, joining teammate Jalen Ramsey on the AFC team that will play the NFC on Sunday at 3 p.m. at Camping World Stadium in Orlando.

As a second alternate, Campbell was selected on Monday to replace Houston’s J.J. Watt, who is unable to participate due to injury.

″At the end of the day, this is a beautiful game,″ Campbell said. ″I love it and I get paid a whole lot of money to do it, which is even better. As far as restructuring and moving money around, yes sure, that’s part of the game.″

With Campbell agreeing to a possible contract restructure, it could help the Jaguars acquire additional cap space to make a stronger push if they decide to pursue Philadelphia Eagles quarterback Nick Foles in free agency.

Foles, who is expected to be one of the top quarterback free agent options on the market, is likely to to command a salary that will exceed $20 million per season.

The Jaguars are likely to release Blake Bortles, though his contract would still count $16.5 million in dead money before June 1 or $11.5 million if he released after that date.

The Jaguars, who were 5-11 last season after going 10-6 and advancing to the AFC title game in 2017, are in desperate need for a playmaking receiver, improved depth on the offensive line and more consistent play at quarterback.

Campbell said he is willing to help recruit free agents to play for the Jaguars.

″We’re going to try and recruit the best players for our offense to be successful,″ Campbell said. ″You have to sell the free agents on coming here to be a part of this. So hopefully, we can get that done because it’s not just pursuing the guy, guys have to want to come here, too. Free agency is a great way to pick up guys, but you have to get the right kind of guys, sometimes it can be ups and downs.″