Bolles alum Mac Jones will take the reins as starting quarterback of the New England Patriots with the exit of quarterback Cam Newton. 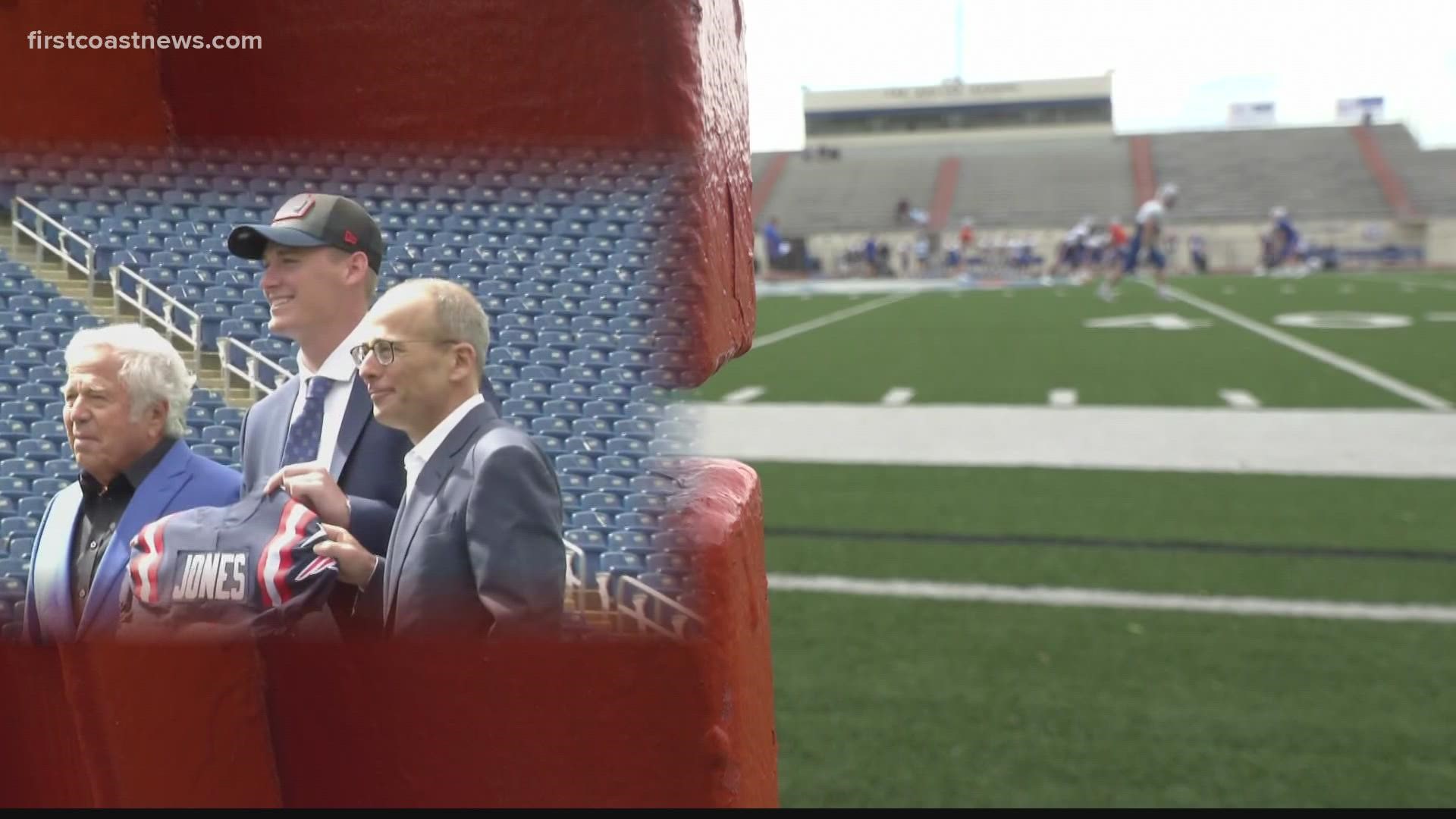 JACKSONVILLE, Fla. — Football players at The Bolles School have some inspiration and a role model encouraging them to play their best this season.

Bolles alum Mac Jones will take the reins as starting quarterback of the New England Patriots with the exit of quarterback Cam Newton.

Bolles' players are excited that Jones sat on the same benches as them and played on the same field during his high school football career. Seeing his success lead to the NFL is creating a new enthusiasm at the school.

"I used to be a ball boy over here when I was really young," Skyler Malone said.

Skyler Malone wasn't a ball boy for just anyone in the mid-2010s.

"Mac Jones was just an idol on the field," Malone said.

Malone is now a junior at Bolles and plays linebacker.

He grew up idolizing Jones, a big player with a big arm.

"It was just always something about him like you would know he was special," Malone said. "He was a superstar always to me even before he went to Alabama. He was just that guy."

"He was a good worker, so we kind of knew he was going to be a player for us," Bolles assistant football coach Mike Barrett said.

Mike Barrett has coached at The Bolles School since 1975 and worked with Jones.

"As coaches we enjoy when they succeed, and of course at that level, that's the ultimate success," Barrett said.

Barrett grew up in New England and can't wait to see Jones on the field for the Patriots.

"I'm going to have to stomach rooting for the Patriots. Personally, I've always hated them, but with Mac there, I'll be a Patriots fan this year," Malone said.

Jones is not only turning some of the players into Patriots fans, but he's inspiring them to do their best.

"All of them get a big kick of out that, and they want to be like him and maybe follow in those footsteps. I think all the young players think that, and that's a good goal to have," Barrett said.

"It's just exciting because you don't know who the next guy could be," Malone said. "There could be someone on their way to the NFL just like him. It's inspiring for sure knowing someone went to the same school as me and has made it big time."

Those on the team who aren't Patriots fans say they'll still root for them and expect to be inspired with what they see.

New England @Patriots starting QB @MacJones_10 played #football at @BollesSchool @Bolles_Football. I talked to coaches & players on how his success is inspiring the team for @FCN2go @FCNsports #TeamSideline Heart of the Game. pic.twitter.com/haAG3iSMZI

New England @Patriots starting QB @MacJones_10 played high school #football at @BollesSchool @Bolles_Football and is inspiring the team to do their best. The full story will be on @FCNsports @FCN2go at 5:30 p.m. today. #FridayNightLights #NFL pic.twitter.com/ShPhm1iltN