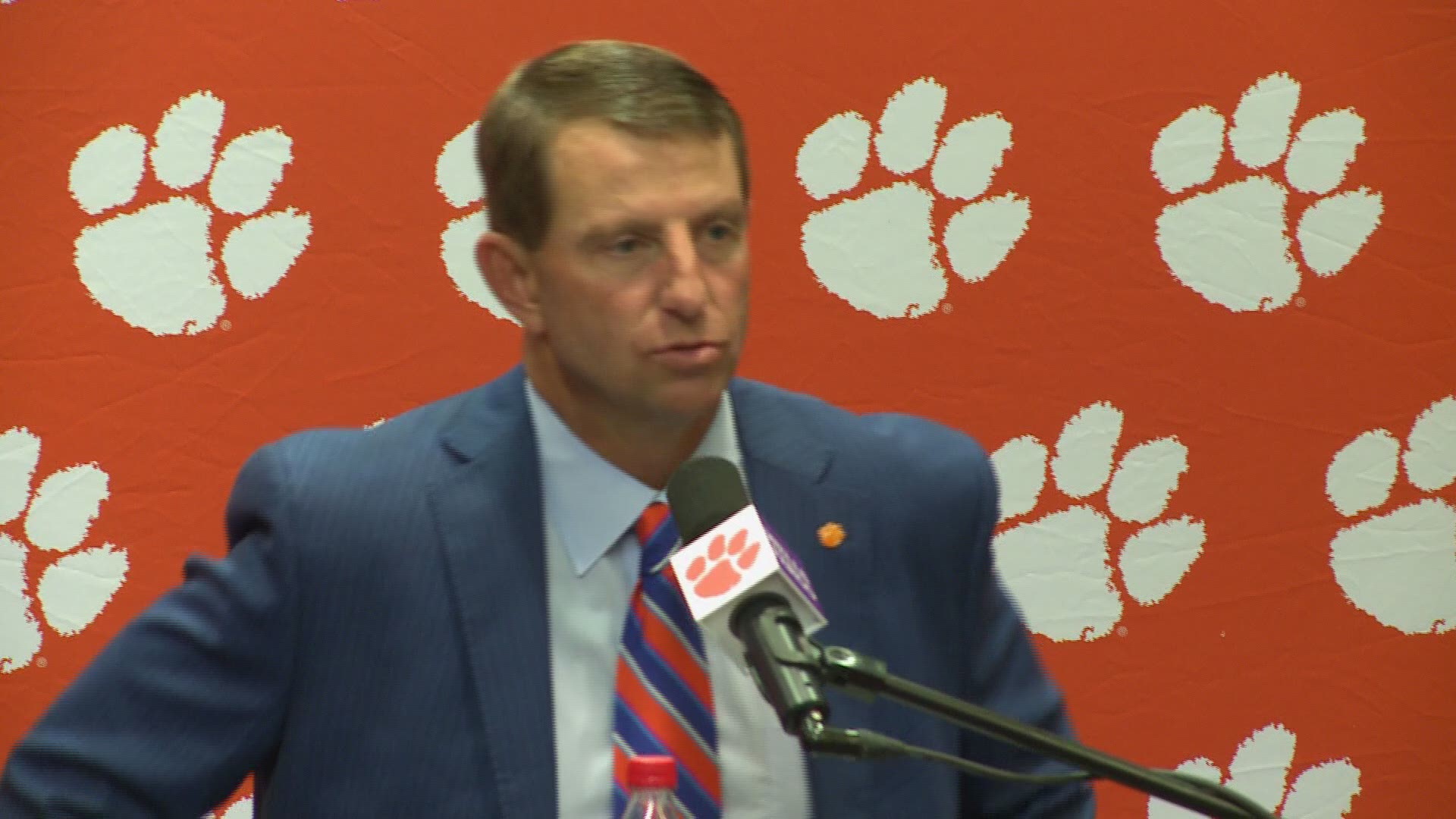 CLEMSON, S.C. (AP) — No. 1 Clemson wanted to leave little doubt it was better than No. 12 Texas A&M. In the process, the Tigers left some doubts that anyone could challenge the defending national champs in another title run.

Trevor Lawrence threw a touchdown pass and ran for a score and the top-ranked Tigers won their record-tying 17th straight game with a 24-10 victory over the Aggies on Saturday.

Many circled this game as the best chance to take down Clemson, given Texas A&M's nail-biting, 28-26 loss to the Tigers in 2018. But it was Clemson's relentless playmaking on offense and defense that held the Aggies to their fewest points in a game since a 19-7 loss at LSU in 2015.

"We wanted to leave no doubt this year," Lawrence said. "I think we did that."

The decisive victory tied Clemson's best-ever run of success that spanned the 2014 and 2015 seasons. It also left a major question in college football: Who can stop these guys?

"That is definitely not how we think," Clemson co-offensive coordinator Jeff Scott said. "We'll look back at this game in six or seven weeks and go, 'Hey, that was a really big-time win early in the year.'"

The Tigers will be double-digit favorites the rest of the regular season in their try for a fifth straight Atlantic Coast Conference title and College Football Playoff berth.

Texas A&M came in filled with confidence. The Aggies vowed they wouldn't let their near-miss, 28-26 loss to Clemson happen this time. They shrugged off the Death Valley crowd with all their own experience in loud Southeastern Conference venues. Offensive lineman Jared Hocker even predicted the upset.

Instead, it was A&M shaking its head about what went wrong as Clemson relentlessly wore down the Aggies with its collection of fast, talented playmakers.

"We just didn't play well enough today to do what we needed to do," Texas A&M coach Jimbo Fisher said.

Clemson did what it's done most of the past few seasons.

It began with Lawrence, who scrambled out of pressure as Justyn Ross broke behind defenders for a way-too-easy, 30-yard TD catch to put Clemson up for good.

Then safety Nolan Turner jarred Mond on what would have been a first-down run to cause a fumble that linebacker James Skalski pounced on to blunt an Aggies' drive.

With the half running out, Clemson receiver Tee Higgins reached behind him to snag Lawrence's throw at the A&M 2. Two plays later, Lawrence had a 1-yard scoring run to send Clemson up 17-3 at the break.

The Aggies could not respond.

Mond, who threw for 430 yards against Clemson a season ago, finished with 236 yards passing — only 115 of those the first three quarters — with an interception and a fumble. His lone TD pass came with 6 seconds remaining in the game, a 2-yard lob to Jalen Wydermeyer.

Texas A&M: The Aggies need to regroup on both sides of the ball after getting hammered by Clemson and seem to get the chance to do it. Texas A&M returns home to face FCS opponent Lamar before starting Southeastern Conference play at home against No. 10 Auburn in two weeks.

Clemson: Welcome to the Heisman Trophy chase, Trevor Lawrence. Clemson's sophomore passer has a so-so outing in the opener against Georgia Tech last week, but look sharp and in control against the Aggies, much more the player he was when the Tigers topped Alabama to win the title last January.

Clemson receiver Amari Rodgers, a starter on last year's title team, returned to the field less than six months after an operation on a torn ACL. Rodgers finished with two catches. Scott was not surprised on Rodgers quick return. "He's an above and beyond type of guy," he said.

Texas A&M managed just 53 yards rushing, a far cry from last year's 219 yards a game that had them third in the Southeastern Conference. The Aggies opened strongly with 241 yards in a win over Texas State, but found little running room against the Tigers. Jashaun Corbin, a 100-yard rusher last week, was held to 34 yards.

Clemson didn't accomplish much on the ground either, held to 121 yards total. Heisman Trophy contender Travis Etienne 53 yards against the Aggies a week after he had a career-best 205 yards against Georgia Tech.

Count on Clemson holding firm to its No. 1 ranking and Texas A&M taking a huge fall down the rankings when the new poll comes out.

Clemson: Returns to ACC play at Syracuse on Saturday night.