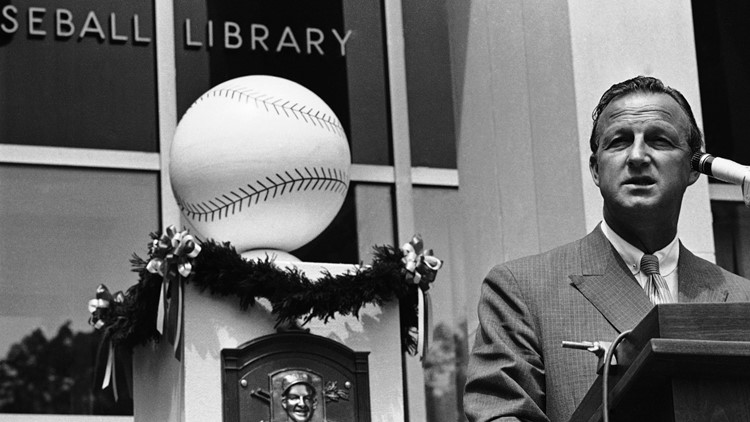 Photo by: ASSOCIATED PRESS
Stan Musial, one of baseball greats, of the St. Louis Cardinals, and now a member of the Hall of Fame, was visibly shaken which brought tears to his eyes, as he spoke of his days as a baseball player, July 28, 1969 in Cooperstown, New York. Musial?s plaque hangs in background. Man at left is unidentified.(AP Photo/Ray Howard)

50 years ago: Stan the Man inducted into the Baseball Hall of Fame

Stan Musial was elected in 1969 on his first appearance on the ballot, getting 93.2% of the vote.

There is no list of ‘Greatest Cardinals of All Time’ that doesn’t have Stan the Man on it or at the top.

Musial spent his entire career wearing the Birds on the Bat, playing 22 seasons in St. Louis. On any major baseball website, you’ll see that statistic split up from 1941-44 and 1946-63—he spent 1945 serving our country in the U.S. Navy during World War II.

He was released from service in March 1946 and got right back into the swing of things. Musial led every measurable offensive statistic in 1946, won his second National League MVP Award and helped the Cards win the World Series.

LISTEN: Subscribe to 5 On Your Side's Sports Plus Podcast

In this March 1958 file photo, St. Louis Cardinals' Stan Musial, with bat in hand, poses for a photo during spring training baseball in Florida. Musial was one of baseball's greatest hitters and a Hall of Famer with the Cardinals for more than two decades. (AP Photo/File)
AP

During his Hall of Fame induction ceremony, Musial called it “the most wonderful honor of my career.”

Here’s how Musial ended his Hall of Fame speech back in 1969: