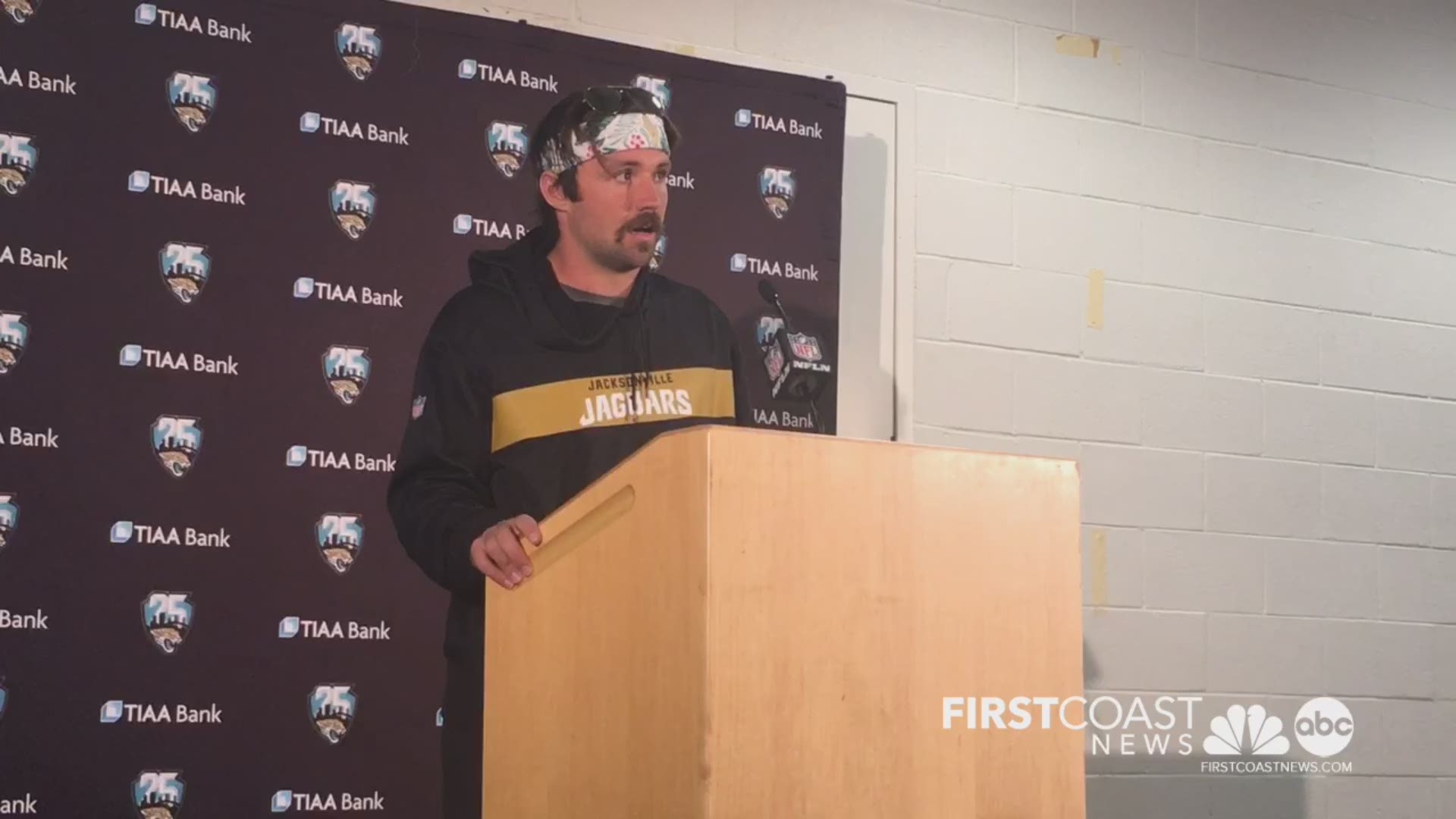 With Minshew Magic and Minshew Mania running as loud and fast as a 1970s muscle car, you know what comes next: Minshew Merch.

The marketable, mustachioed mug of Gardner Minshew II, the Jaguars’ unexpected star quarterback, is all over dozens of different T-shirts for sale — licensed and unlicensed — and this week sales of his No. 15 jersey jumped into fifth-place among NFL players.

Expect much, much more to come.

“There’s a lot of inspiration with him, and we’ve only just kind of scratched the surface,” said Jamie Mottram, president of BreakingT, a Washington, D.C., company that just signed a licensing agreement with Minshew’s representatives. So far it’s come out with six Minshew-themed T-shirts.

“There’s probably a lot more jean shorts and and headbands and jock straps and mustaches in our future,” he said.

The company identifies viral social-media trends in sports, runs them through a complicated formula and comes up with the hot prospects they deem “merchable.” They then try to get products out quickly to capitalize on the moment.

“We’re looking at all players across the board, thousands and thousands of athletes,” Mottram said. “We look at him as, if not the most merchable player in the NFL this year, then one of them. We use that as a word, merchable.”

There’s plenty of room on the bandwagon, Mottram said.

“We’re tracking trends and moments in sports that are generating a lot of attention and enthusiasm. As soon as he went in for [Nick] Foles, week one, we saw the data spiking around Minshew, not just for his play but his personality,” he said.

“We talk about moments — he’s a walking moment. He’s a quote machine, he has an incredible look, and it’s not just one aspect, it’s the jean shorts and the headband and the mustache and the jock strap. It’s everything.”

Mottram noted that Minshew will get a royalty from sales of items through BreakingT’s website (breakingt.com/minshew) and, starting next week, at Academy Sports and Sports Mania stores.

Of course, a lot of screenprinters have already gotten into the act with unlicensed gear. Look for “Minshew” on Amazon, for example, and there are dozens upon dozens of different items, mostly T-shirts but also coffee mugs, playing cards and fake mustaches.

Since then, the company has been busy catching up. It’s currently selling Minshew’s No. 15 jersey and a T-shirt with a stylized mustache and headband. More offerings are in the works.

Fanatics, based in Jacksonville, says Minshew has been a top-10 selling NFL player since his first NFL win on Sept. 19. Since Sunday, he’s the fifth best-selling NFL player. He’s the top-selling player on the Jaguars, of course.

Fanatics will be taking Minshew and Jaguars gear to the fans next week, heading to events around the city with trailers full of merchandise. The company says the Jaguar stores at TIAA Bank Field will have “significantly” more stock than usual for the next home game on Oct. 13 against the New Orleans Saints.

The Jaguars themselves are selling a “Minshew Mania Mini Pack,” which includes tickets to the Saints and New York Jets games — as well as a bandana, a mustache and an “on-field photo with your gear.”

At this point in Minshew Mania, it probably wouldn’t be a surprise at the Saints game if there were more mustaches than not in the stands.

Kristi Sweeney, associate professor of sport management at the University of North Florida, said quarterbacks are by far the most marketable players in the NFL, and Minshew has appeal because his “uniqueness breaks the NFL QB mold.”

There are just a couple of things that could thwart that, Sweeney said: “If #MinshewMania is here to stay, and he remains in the starting role, even after Nick Foles returns, his marketability will be largely dependent on him becoming a very good, if not great, NFL quarterback.”

Sweeney and Mottram both noted though that Minshew’s winding path to the NFL — and his sudden, unexpected success — has great appeal.

“He’s the lovable underdog,” Mottram said. “Though after a month of playing at a high level, he might not be an underdog. Just lovable.”