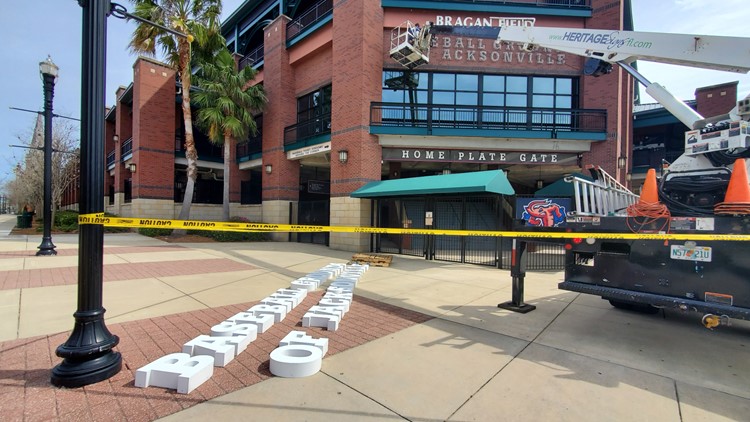 JACKSONVILLE, Fla. — It's out with the old and in with the new at Bragan Field, as the Baseball Grounds of Jacksonville become 121 Financial Ballpark ahead of the 2020 Jumbo Shrimp season.

The Jacksonville-based credit union bought the naming rights to the Baseball Grounds in January, and Tuesday afternoon the old name came off the marquee.

Crews are working to switch the signage at the former Baseball Grounds of Jacksonville to become 121 Financial Ballpark.
First Coast News

The naming rights for the ballpark were secured through 2033, but the Jumbo Shrimp did not say how much money 121 Financial paid for those naming rights.

The stadium is owned by the City of Jacksonville, but city leaders have not said how much, if any, of the money from the deal will go back to the city.

The Bragan Field name will remain attached to the stadium in honor of the family who owned the franchise for more than three decades.

A worker uninstalls the old Baseball Grounds of Jacksonville signage as the stadium converts to its new name, 121 Financial Ballpark.
First Coast News