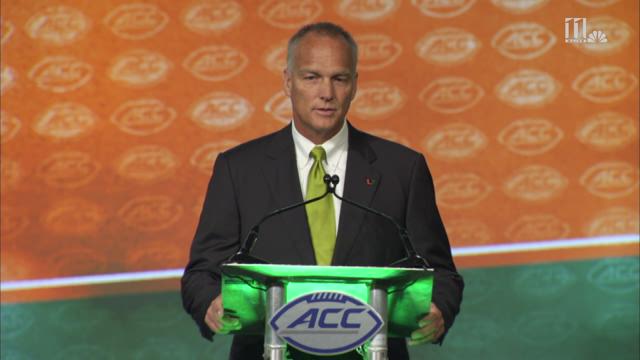 Mark Richt made his first appearance at ACC Media Day Thursday after becoming the head coach of the Miami Hurricanes.

Richt, who was fired from the University of Georgia in December, talked about his excitement of coaching at his alma mater and hopes to leave his mark before his career ends.

Richt, 56, said he is planning Miami to be the last stop in his decades long coaching career.

"I have no intention of doing anything but finishing my coaching career at Miami," Richt said.

While he gained experience in the ACC while coaching at Florida State, Richt said he does not really know what to expect against his new conference opponents. However, he is looking forward to seeing a familiar foe at his first conference game: Georgia Tech.

"I don't think I'll not be able to not have memories from the last 15 years, every other year going in and out of there. A lot of ball games played in that place. It's a great venue. But we'll be wearing orange and green this time."

"We're excited to have Mark in the league," Georgia Tech head coach Paul Johnson said. "Certainly he brings a lot of tradition, whatever. We've struggled with Miami the past few years without Mark. Unless he's going to throw it or carry it...I'm more worried about their quarterback than I am him."

Richt, who was 145-51 with the Bulldogs, did not talk too much about his former team. He did mention adding coaches Thomas Brown, Todd Hartley and Stacey Searles, all of whom he worked with in Athens.

"They know me, too. They know what they're getting into. They know how I like to do things. They believe in that."

Richt will return to Atlanta to face the Yellow Jackets on Oct. 1.

Mark Richt through the years

1 / 41
ATLANTA, GA - DECEMBER 03: Head coach Les Miles of the LSU Tigers converses with head coach Mark Richt of the Georgia Bulldogs after their 42-10 win during the 2011 SEC Championship Game at Georgia Dome on December 3, 2011 in Atlanta, Georgia. (Photo by Kevin C. Cox/Getty Images)