The Jaguars managed to gain only 189 yards of total offense, less than half the total offense gained by the Denver Broncos. 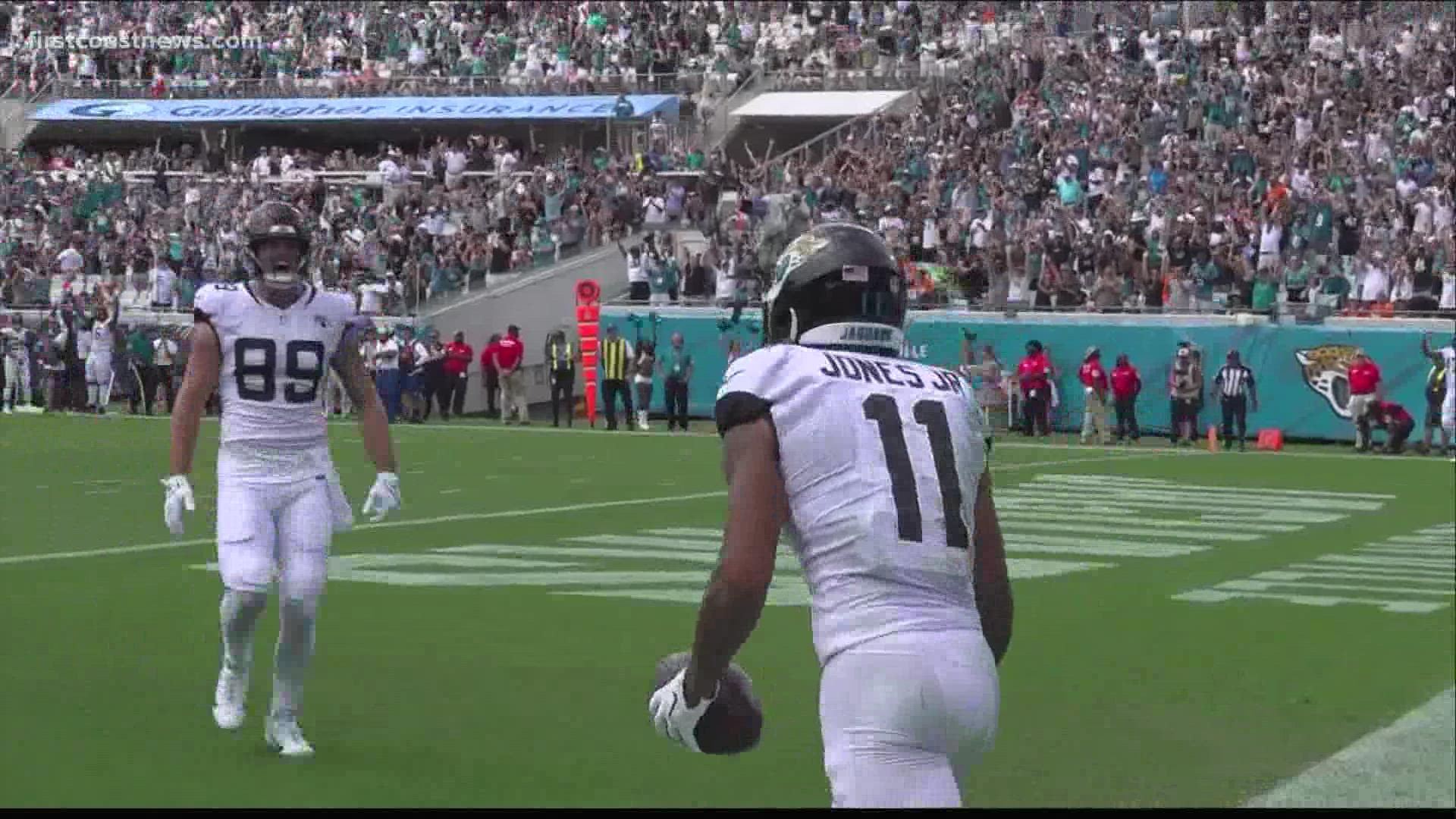 JACKSONVILLE, Fla. — The Jacksonville Jaguars (0-2) extended their losing streak, which now stands at 17, with a 23-13 loss to the Denver Broncos (2-0) Sunday at TIAA Bank Field.

The Jags seemed to still show the same struggles they had in their first game against Houston last week, putting up less than 200 yards in total offense and committing 7 penalties that cost them 70 yards.

Yet, the first drive appeared to show the Jaguars clicking on all cylinders. Quarterback Trevor Lawrence completed five of his eight passes in the opening drive, capped with a 25-yard touchdown pass to Marvin Jones.

Lawrence and the Jaguars offense would not score again.

The Broncos seemed poised to respond with their own touchdown in a drive led by quarterback Teddy Bridgewater, but a 16-yard sack by Josh Allen stalled the drive, leading to a field goal.

The Jaguars held into a 7-3 lead into the second quarter.

In their third drive of the game, Jags' kicker Josh Lambo missed a 52-yard field wide right that would hold the score to 7-3.

In the first play after the two-minute warning, Bridgewater connected with Tim Patrick for a touchdown, giving the Broncos a 10-7 lead.

On the ensuing drive, as rain started to pour in Jacksonville, the Jaguars' offense came out aggressive, driving to the Denver 30-yard-line in just over a minute of game time. Yet, McManus missed his second consecutive field goal with only seconds remaining in the half.

When all was said and done, the Broncos clung to their 10-7 lead as time expired in the first half.

Denver added to that lead in their first drive of the half, highlighted by a 55-yard pass from Bridgwater to Courtland Sutton that brought the Broncos to the Jacksonville 17-yard-line. The Broncos would score a touchdown two plays later with a pass from Bridgeway to Noah Fant.

With just under six minutes to go in the game, and Denver leading 23-7, Jamal Agnew helped to give Jacksonville new life with a 102-yard kick return for a touchdown. However, a missed two-point conversion, which would have cut the lead to eight points, instead allowed Denver to retain a 23-13 advantage.

On the ensuing drive, the Jaguars' hopes for a comeback were dashed with a slow drive that helped Denver seal a 23-13 victory when the clock expired near the Jacksonville goaline.

The Jaguars' offensive woes may be the ultimate story of the game.

Jacksonville only managed to gain 189 yards on offense. In fact, punter Logan Cooke's 227 yards punting exceeded the yards gained by the offense.

Lawrence completed only 14 of his 33 throws for 118 yards, with a third of his completions coming on the first drive. He finished with a 42% completion percentage with one touchdown and two interceptions.

However, the blame was not solely on Lawrence's passing. The Jaguars as a team rushed for 75 yards. James Robinson was leading rusher with 47 yards and 4.3 yards per carry.

There were bright spots on the Jaguars Sunday, mostly coming from the defense. The Jags caused three sacks and held the Broncos to less than 100 yards on the ground.

However, the Broncos dominated the game statistically, with more than double the total offense gained by the Jaguars. The large majority of those yards came through the air, with 302 yards passing compared to 96 yards rushing.

The Jaguars dropped to 0-2 on the season. They will host the Arizona Cardinals next at TIAA Bank Field. The game will be at 1 p.m.