The Los Angeles Dodgers may be the top-ranked team in our Locked On MLB playoff power rankings, but their fate lies in a winner-takes-all game against the Cardinals. 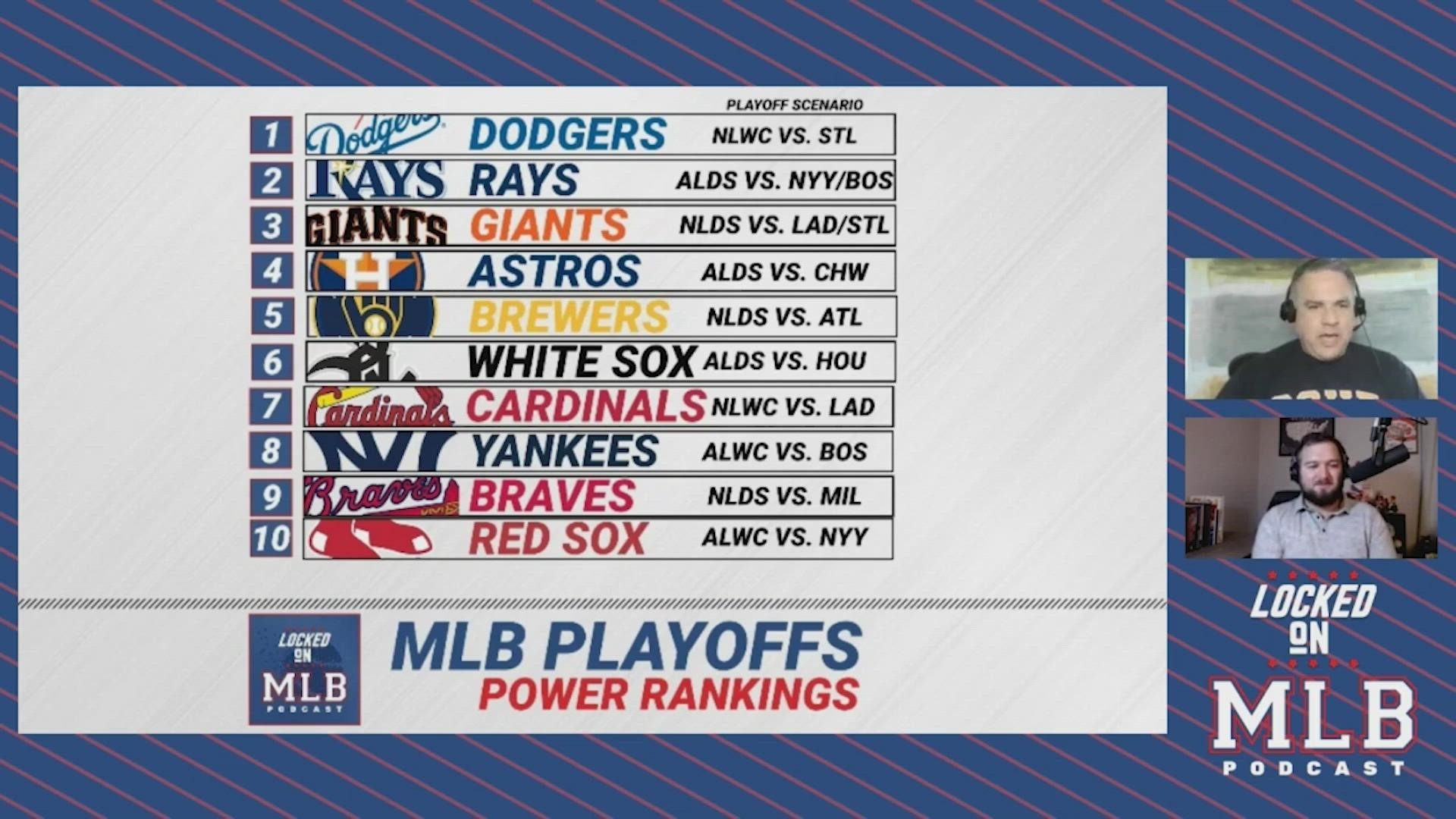 LOS ANGELES — Major League Baseball's playoff field is set after it came down to the final weekend for the American League Wild Card teams as well as the NL West's, and MLB-best, Giants and Dodgers.

The Giants held off the Dodgers to win the NL West by a game, giving them the 1-seed in the National League. Even though the Dodgers finished with the second-best record in baseball, they're forced to play in the one-game NL Wild Card game against the St. Louis Cardinals, who won 17 games in a row in September.

The Red Sox and Yankees both came away with late wins on Sunday to secure themselves in the AL Wild Card spots, dashing the dreams of the Blue Jays and Mariners and any shot at any extra tiebreaker game ahead of the Wild Card game.

MLB PLAYOFFS PREVIEW SPECIAL: Check out our full Locked On MLB preview of the 2021 playoffs as we go through power rankings, preview the Wild Card game matchups, and speak with local experts on their teams.

LISTEN WHEREVER YOU GET YOUR PODCASTS

First, for a quick refresher, here's the MLB playoff format: The two AL Wild Card teams and two NL Wild Card teams play against each other in one game to decide who moves on to their league's divisional series where they will take on the No. 1 seed in that league.

The 1 vs. 4 and 2 vs. 3 teams in each league face each other in a five-game divisional series, whoever gets three wins first, wins. The winners of the divisional series' move on to the championship series in each league, where they play a seven-game series. First to four wins in that series moves on to the World Series for another seven-game series.

The ALDS games will begin on Thursday, Oct. 7. The times and how to watch have not been finalized as of Monday morning.

The NLDS games will begin on Friday, Oct. 8. The times and how to watch have not been finalized as of Monday morning.

Notably, the Dodgers, who are in the NL Wild Card winner-takes-all against the Cardinals on Wednesday, come in at No. 1 on our power rankings. While their opponent, the hottest team in baseball in September, come in at No. 7.

The AL Wild Card teams in the Yankees and Red Sox were both ranked in the bottom three of our playoff power rankings. The Giants, who had the best record in baseball, were ranked third.

Watch us break down these power rankings on the Locked On MLB Playoff Preview Special.