How Trevor Lawrence responded from arguably his worst day (or, rather, team period) of Training Camp and other news & notes from Monday's practice 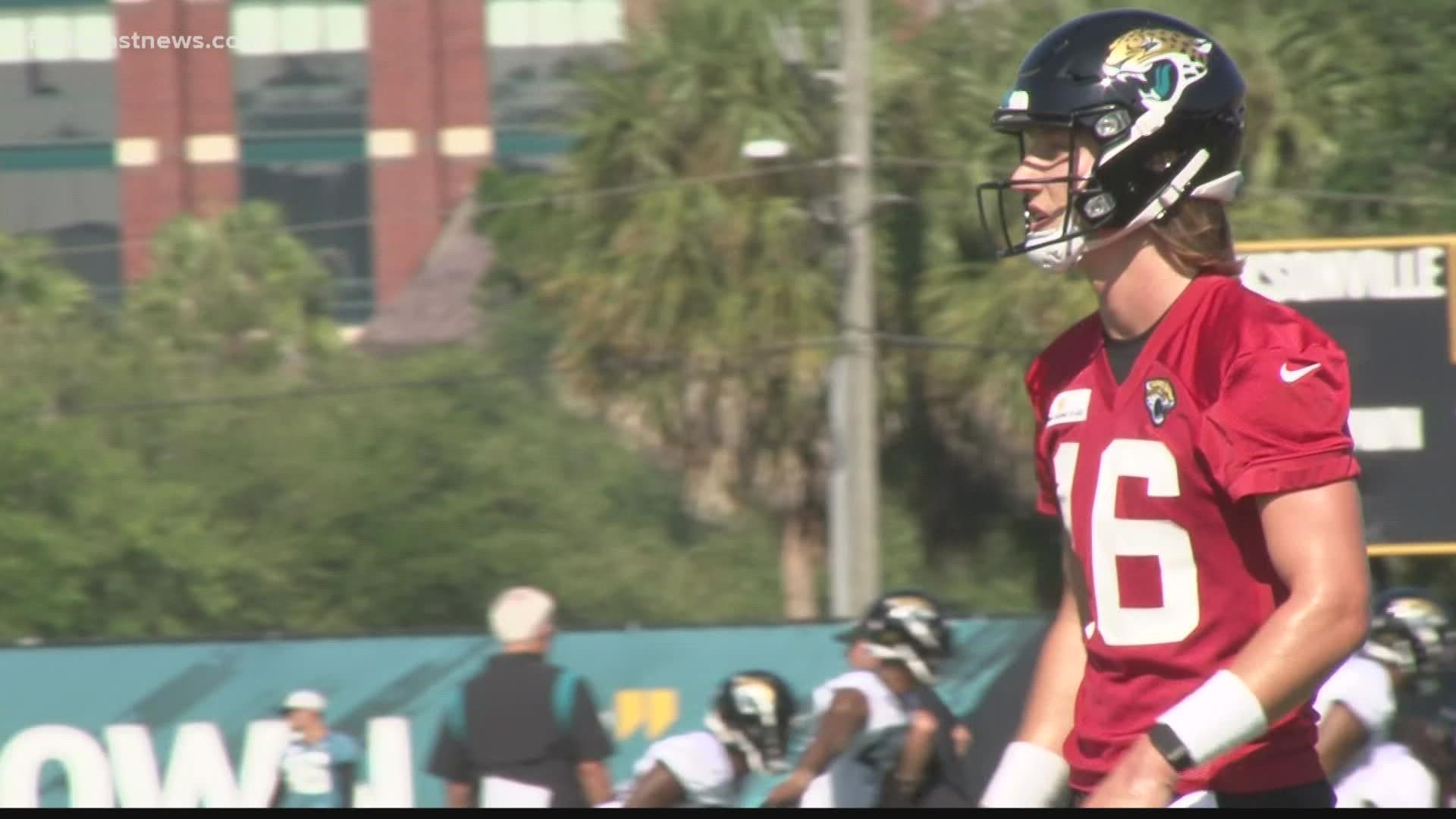 In the words of another NFL quarterback:

Trevor Lawrence isn't going to be perfect every day. He is going to make mistakes. How he responds from those mistakes will determine whether Jaguars' fans should be hitting the panic button or not.

"As a football player, you're not always going to have your best day. That's why we come out here and work each and every day. I feel like it's better to have those days now than later in the season," Lawrence's long-time teammate and fellow Clemson Tiger, Travis Etienne, said after practice. "I know how Trevor is. I know his mind-set. He's going to come out here and be much better than he was today."

What went wrong at Monday's fifth practice of Training Camp?

An ominous final throw of one-on-one's with receivers and linebackers should've foreshadowed what was to come for Trevor Lawrence Monday.

Lawrence underthrew Etienne and was nearly picked-off by Quincy Williams, only for the ball to slip through Williams grasp and be caught by a diving Etienne (more on his fantastic Monday in a second). The team then regrouped and headed over to the first team period of the day. Lawrence began with a series of hand-off's and bootleg runs, showcasing his surprising speed.

On his first passing play of the period, Lawrence was picked off down the right sideline by a wide-open Shaq Griffin; that play was ultimately called back due to the defense jumping off-sides. But then the next snap was fumbled. Lawrence's third pass was batted down at the line of scrimmage by Roy Robertson-Harris. Then, now throwing down the left flank, Lawrence was picked off by a wide open Rudy Ford. But, like the Griffin interception, it was clearly a case of miscommunication with his receivers. It was very clear someone ran the wrong route.

The same could not be said for Lawrence's third interception, which he underthrew and hit rookie defensive back D.J. Daniel square on the numbers. Yikes. Lawrence also overthrew D.J. Chark two reps earlier, and finished the period 1-of-6. And a reminder: Monday was when, in the words of head coach Urban Meyer, the Jaguars would start charting and "keeping score." For what it's worth: Gardner Minshew finished 9 of 10 in that same period, highlighted by a beautiful wheel route by Etienne and a pair of completions to Laquon Treadwell.

To quote a sports cliche, though: "it's not how you start, it's how you finish." Lawrence came out firing in the subsequent, 7-on-7 period. He was a perfect eight-of-eight, sprinkling the ball all-over-the-field, connecting with Laviska Shenault twice, Chark, and Marvin Jones Jr., among others. Lawrence then successfully navigated the first-team offense down the field in the final team period, connecting thrice with Shenault -- including dropping a pass up-and-over a jumping Josh Allen into Shenault's waiting arms. After that tough first period, Lawrence finished 13 of 19.

"A guy that's always asking questions and wants to get better," associate head coach Charlie Strong said of Lawrence after practice. "And here he is, a guy that comes in as the first pick, and it hasn't bothered him at all. The players respect him for how he goes about it and how he carries himself. It's a big deal how you carry yourself."

Lawrence carried himself well Monday, not getting too low or too high just as he has the previous four practices -- even if the low's Monday were the lowest he's faced so far.

The veteran Minshew finished 14-of-21 Monday, primarily running with the second team. He was picked off by Brandon Rusnak during the final team period, but it was called back via an off-sides call. From a casual viewer's perspective: most of Minshew's completions were either check-down's or underneath routes. Lawrence appeared to spray the ball all over the field, for better or worse.

With C.J. Beathard out Monday as a COVID-19 close contact, Jake Luton saw his first team reps of Training Camp. He finished 2-of-7 with both of his completions to sixth-round rookie Jalen Camp. Luton was picked off by Sidney Jones during 7-on-7 and suffered pass break-up's (PBU) at the hands of Corey Straughter, Rudy Ford, and Rusnak.

The Jaguars other first-round selection from 2021, Etienne, was everywhere Monday. He caught five passes during team drills in addition to taking a handful of hand-off's. Lawrence's one completion during that ill-fated first team period was to Etienne (can you say "security blanket?"). Much like his quarterback, Etienne didn't appear too high or too low after Monday's performance, but he did stress the strides he has made in both the passing and receiving game.

"Each and every day I feel like I'm getting better," the Clemson grad said. "Really, I think it's just confidence being out there with elite, NFL guys... and being able to make plays.

"I've worked on the totality of my whole game. I did receiver drills, I did running back drills. I didn't let anything go to waste. Everyone has this misconception I'm a receiver, but I'm a running back who's able to spread out wide and run routes like a receiver."

Travis Etienne = big beach guy. Said sitting on the beach at 8/9 PM in Jax most peaceful he’s been. Looking for a house at the beach

Shenault has been consistent throughout Training Camp, but Monday was one of those days where you looked down at your notes and, suddenly, he's the leading receiver. The second-year receiver hauled in seven passes Monday from various routes and positions on the field.

Defensive backs Chris Claybrooks and C.J. Henderson remain on the Reserve/COVID-19 List. Unvaccinated players must remain on the List for at least 10 days. Strong commented on Henderson's progression without having the opportunity to be on the field:

"It's tough when you miss that many days -- and now you gotta get out here. He's been in the meetings, but now it's just that he's missed the work on the field. That's where he's gotta get caught back up."

- It's becoming more apparent by the day that second-year tight end Ben Ellefson is the favorite to make the Jaguars' 53-man roster, in addition to O'Shaughnessy and Chris Manhertz. With O'Shaughnessy still not at 100-percent, Ellefson was the second tight end in position and team drills. He had a tremendous catch on a slant route from Lawrence during 7-on-7's, in which Daniel Thomas was draped all over him.

- Rookie Luke Farrell also continues to make strides, catching passes from both Lawrence and Minshew Monday. Tyler Davis caught a pair of passes from Minshew. Tim Tebow's one target, from Luton, was broken-up by Rusnak.

- Collin Johnson's number hasn't been called nearly as much as many anticipated coming into Camp; Treadwell, Pharoh Cooper, and Phillip Dorsett have quickly become the go-to option for the second and third team offense. But he had a great comeback route in the final team period, snatching the ball away in traffic from three defenders -- and another receiver.

- With temperatures near 95 degrees, even Myles Jack, notorious for practicing in pants, skipped the sweats. That's how hot it was.

Roy Robertson-Harris says Urban has them running like no other Training Camp he’s been a part of — “I thought I was in football shape” 😆#Jaguars | @FCN2go pic.twitter.com/dXnj2VwDD5

The Jaguars are back on the practice field Tuesday morning and will be in pads for the first time.