Jaguars linebacker Telvin Smith on the playoffs: 'There's still work to be done'

The 10-3 victory over the Buffalo Bills didn't just keep the Jaguars' playoff hopes alive. It also kept a tight-knit group together for at least one more week. 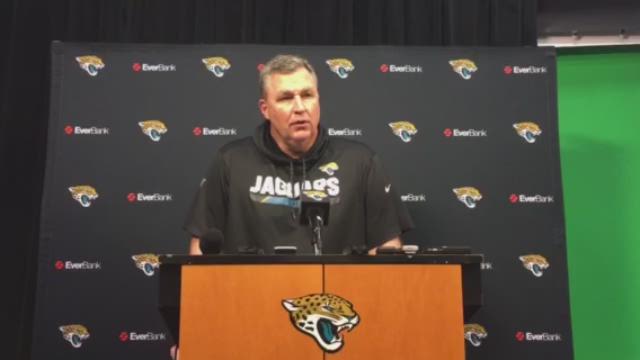 JACKSONVILLE, Fla. - Jaguars linebacker Telvin Smith had one of the most successful college careers of any player in the Jacksonville locker room.

Until this season, his NFL success paled in comparison to his accomplishments at Florida State.

The Jaguars won the AFC South for the first time in franchise history this season. This past weekend, the group added another accomplishment to its growing list of accolades: a playoff win at EverBank Field.

The wild-card round win was the first in 10 years for the franchise. It was the team's first home playoff win in 18 years.

The 10-3 victory over the Buffalo Bills didn't just keep the Jaguars' playoff hopes alive. It also kept a tight-knit group together for at least one more week.

"That was a big message before the game," Smith said Wednesday.

"If we lost last week, then this team would be no more. The love you say you've got for your brother, that's over. The feeling or the sense of the love will be there but it'll leave eventually because this team, the guys are gone. Moving forward, new season, a new mindset, so I think guys just bought into it and played hard for it."

Smith is a team captain and an outspoken leader in the locker room. He sets the tone for the team on-and-off the field.

Smith has as good of a perspective on the locker room as any Jaguars player. He has seen the growth of his teammates throughout every stage of the season.

"I think now because we're getting closer to the end of the season, people are starting to see it as every game is more of an opportunity, more is on the line but it's the same as when we started the season," Smith said.

"We're fighting for the same thing. Yeah, we accomplished some goals we set along the way but the season is not over, so there's still work to be done."

The work continues this week as the Jaguars prepare for the Pittsburgh Steelers. Sunday's divisional-round matchup will be a rematch at Heinz Field, where the Jaguars upset the Steelers, 30-9, in Week 5.

The Jaguars defense picked off quarterback Ben Roethlisberger five times in that game.

The Steelers quarterback has since said he wanted a rematch. Some of Roethlisberger's teammates have already said they are looking forward to playing in the AFC Championship Game, ignoring the fact that they would have beat Jacksonville to play in that contest.

Smith, who scored a defensive touchdown in the Week 5 win, said the Steelers are used to being top contenders. He attributes the Steelers' confidence to their team's history.

"The thing that we've learned about society is when you've grabbed that stigma of being somebody or something of importance or something great, it sticks with you," Smith said. "That's what's happening now, it's sticking with them."

Smith has tempered his trash talking for the week, despite the bragging rights of winning the previous matchup. He prefers to focus on preparation instead of the pomp and circumstance of playoff hype.

"We're just going to continue to work," Smith said. "We're going to prepare to be ready to play Sunday."