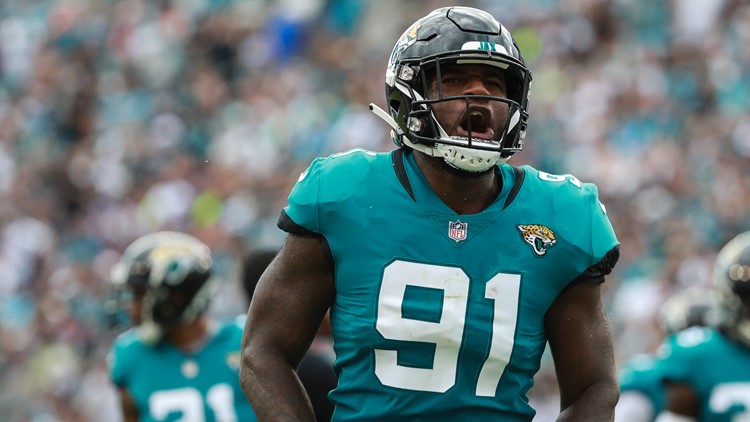 Photo by: Scott Halleran
SEPTEMBER 16: Yannick Ngakoue #91 of the Jacksonville Jaguars celebrates a play in the first half against the New England Patriots at TIAA Bank Field on September 16, 2018 in Jacksonville, Florida. (Photo by Scott Halleran/Getty Images)

Jaguars rule Ngakoue out of Sunday's game at Houston

The Jaguars have ruled Yannick Ngakoue (hamstring) out of Sunday's game against the Texans -- and the "injury bug" doesn't end there.

Jaguars head coach Doug Marrone told reporters Friday that he doesn't think A.J. Bouye (hip) will play Sunday either. He also said that Cam Robinson (leg), who missed last week's game against the Chiefs, has been cleared to play, but Marrone is holding him out. Meanwhile, wide receiver Marqise Lee saw 11 snaps in his return from a knee injury against the Chiefs, but Marrone said he, too, is questionable.

Cedric Ogbuehi (hamstring) and Josh Oliver (hamstring) have also been ruled out for the second consecutive week.

A positive note for the Jaguars: Marcel Dareus (elbow), who missed last week's game against the Chiefs, did not have a designation in the latest injury report, so he should be in line to play Sunday.