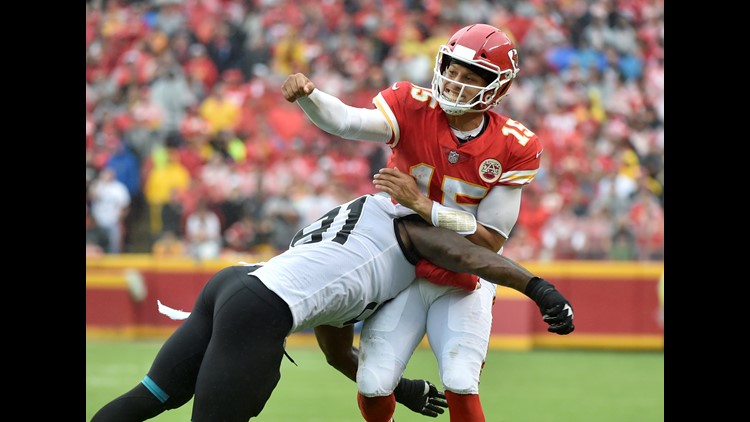 WEEK ONE: Jaguars set to host Chiefs to begin 2019 season

After a disappointing 2018 campaign, the Jaguars' road to a bounce-back year in 2019 begins Sunday when they host the Kansas City Chiefs. Kick-off is scheduled for 1 p.m. from TIAA Bank Field; the game will be broadcast on CBS.

Reigning NFL MVP Patrick Mahomes and his cast of talented play-makers will surely give the heralded, "Sacksonville" defense all it can handle. In his first full year as a starter, Mahomes threw for over 5,000 yards and 50 touchdowns.

However, none of those touchdowns came against the Jaguars -- but two of Mahomes' 12 interceptions did. Kansas City did win last year's meeting in the Midwest 30-14, thanks in large part to their defense: the Chiefs picked off the Jaguars four times last October.

But that was with Blake Bortles under-center. On Sunday, free agent-signee Nick Foles will make his long-awaited, regular season Jacksonville debut.

In five games in 2018 with the Eagles, Foles threw for 1,413 yards and seven touchdowns. He signed an $88-million, four-year contract with the Jaguars in March after spending two seasons in Philadelphia.

That second stint in the City of Brotherly Love came after a one-year stop in Kansas City -- and that's far from the only "history" between Foles and the Chiefs.

Part of why Foles signed with KC in 2016 was to reunite with head coach Andy Reid, who had drafted Foles in 2012 when he was the head coach of the Eagles. Foles had three touchdowns in three games with the Chiefs that season. It was also there that Foles met fellow first-year Jaguar Chris Conley. The latter also inked a deal with the Big Cats this off-season after tallying over 1,200 yards and six touchdowns in four seasons with the Chiefs.

Sunday will mark the 13th meeting between the two sides; the series is currently tied at 6 wins each. The Chiefs have won four straight meetings over Jacksonville.