Whenever a new player from the opposing team is sent to the penalty box, there's Mike "Sign Man" Mitchell, welcoming him to town. 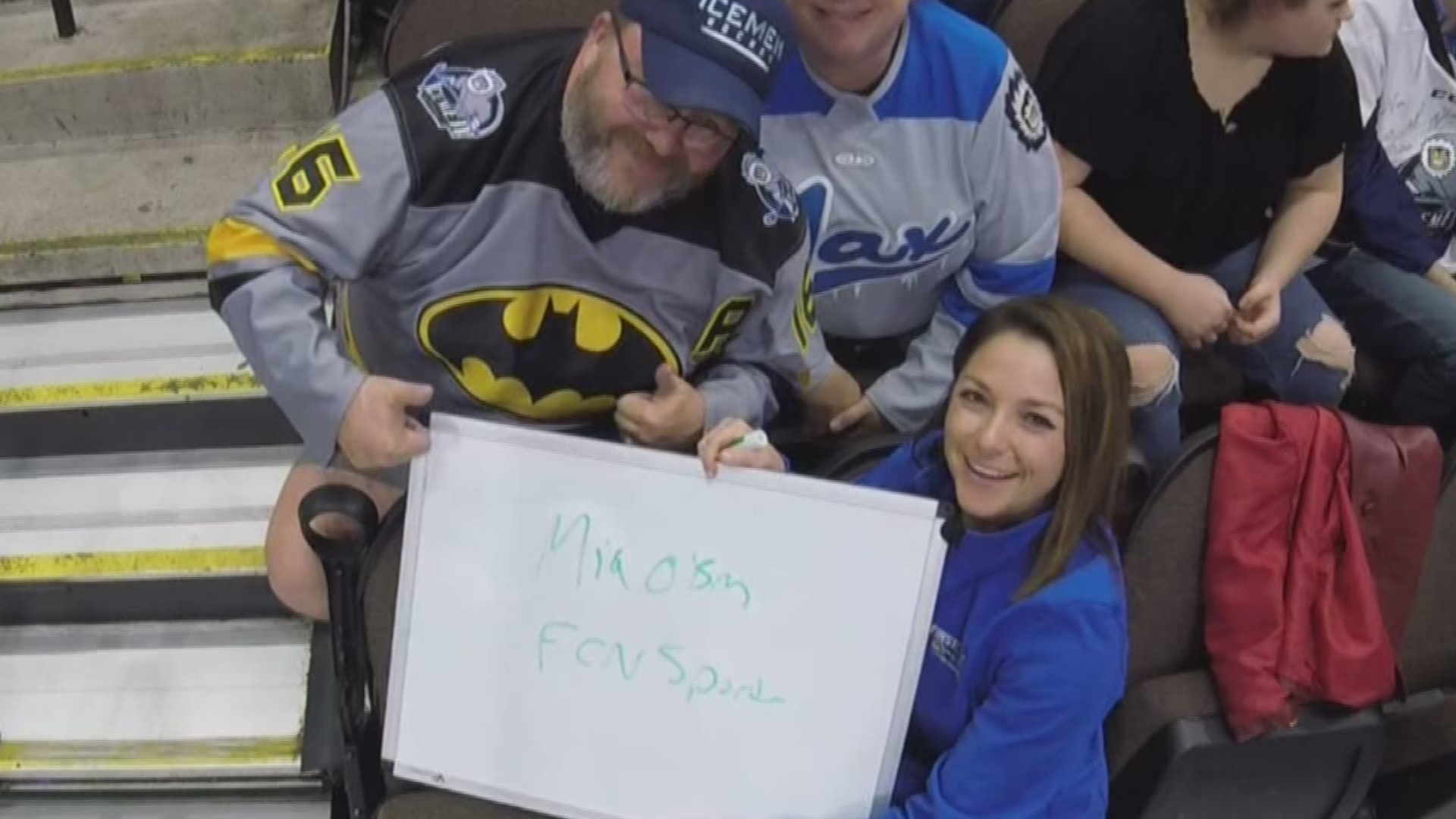 Mike and Cheryl Mitchell have been Jacksonville hockey fans for more than two decades. So, of course, they signed up for season tickets just hours after the Icemen were born three years ago.

"From October to March our life basically revolves around the Icemen," Cheryl explained before a recent game.

It's deeper than that.

"The first game of this season was four games before our 20th wedding anniversary," she continued. "We renewed our vows at the tailgate with Fang the mascot officiating."

Yes, the Mitchell's are "puckheads" (no, really. That's the name of the Icemen fan organization they're a part of)  and they've watched Jacksonville hockey transform over the past 20-plus years.

Their first dates were at the now defunct-Lizard Kings' games. They also had season tickets to the also defunct-Barracudas.

It was at a game for the latter that Mike took his fandom to another level.

"I was in the Navy for 23 years on submarines: heckling is a sport for us," he explained.

So naturally, Mike became a regular 'heckler' of the Lizard Kings and Barracudas' opponents, chirping and banging on the glass of the penalty box from his seat.

But when the Barracudas relocated to the Jacksonville Sports and Ice Complex, the penalty box was suddenly on the opposite end of the arena from where fans sat. How would Mike be able to heckle?

"Necessity is the mother of invention, and so the white board was born as a way to still heckle because they couldn't hear me otherwise," he explained.

Mike began bringing "The White Board" to games, complete with eraser and marker ("that's why you gotta wear the cargo shorts" he explained at one point of the Icemen's 4-3 win over Brampton).

Whenever a new player from the opposing team is sent to the penalty box, there's Mike "Sign Man" Mitchell, welcoming him to town. Cheryl even takes photos of each sign and posts them to the "Puckheads" Facebook group for all to see.

Credit: Cheryl Mitchell
Mike Mitchell holds up one of his "signs" from the Icemen's win over Brampton on January 11, 2020.

How do the Icemen feel about it? They couldn't be happier.

“Every team has their characters, but “Sign Man” was so unique because he changes from play to play," Icemen President Bob Ohrablo said recently. "I don’t know how he gets all those ideas, you should ask him!"

We did, and there's no particular rhyme or reason. Sometimes it's a play on words and other times he pokes fun at himself.

"The Greenville Swamp Rabbits were here, and I told them I found it ironic that the hockey team had more teeth than everybody else in the city, and they actually laughed at that."

There's also the one he used for Mitchell Heard, formerly of the Florida EverBlades.

"He's not in [the ECHL] anymore," he explained. "I scared him off to Germany. He wanted to fight me because I asked him and his [teammate] that were in the box together if they were 'thunder buddies' from the movie 'Ted.' And he got really upset."

"I'd say half the arena probably knows who he is," Cheryl Mitchell laughed. After all, even if you miss The White Board, Mike is the fan leading "Ric Flair" cheers after every Icemen goal scored.

But his message is always pure.

“I don’t use anything dirty," he said. " We got kids around. We want them to have fun too. I want hockey to grow here."

Credit: Cheryl Mitchell
Jackson, the son of a friend of the Mitchell's, helped Mike out with one of his more recent signs.