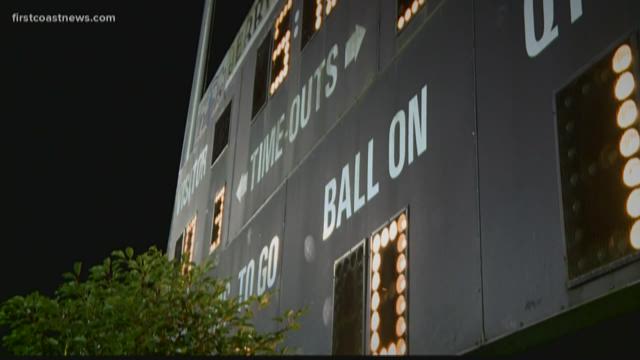 High school football in the Peach State is big business and Georgia coaches are proving to be the real winners.

“There is no price you can put on winning,” Glynn County Athletic Director Steve Waters said.

But Georgia public schools can put a price on hiring the right coach.

“The biggest surprise to me was how fast coaches' salaries are growing,” Waters said.

In February 2016, a First Coast News On Your Side Investigation found 22 coaches making six-figures.

“It's shocking really, a 64 percent increase in coaches’ supplements, but I think programs are starting to realize that there is value in going out and paying the amount of money we pay to find a good head coach,” Waters said.

Across the state – from Brunswick to Atlanta and Macon to Valdosta – out of the 36 coaches – the minimum total paid was $3.6 million to coaches during the 2016-2017 school year.

“I don't think people realize the investment of time these high school head football coaches are doing,” Waters said. “You know it's hard to pay enough to find a quality head coach and certainly I think here in south Georgia where we're setting the standard.”

“Everyone knows about the college market but the high school market is getting more and more competitive each year," Waters told First Coast News in 2016.

And since then, the high school market in Georgia has gotten more competitive.

According to Georgia High School Football Historians Association, Propst has won three region championships and two state championships. According to a Colquitt County school’s spokesperson, Propst doesn't teach any classes and doesn't serve in any other role other than head football coach.

Coffey has since left the sidelines and took over as Camden County school’s athletic director. Hidalgo received a $28,000 raise after leaving Atlanta’s Walton High School in 2014 for Brunswick’s Glynn Academy and the Georgia coast.

In some counties in Georgia, teachers, assistant coaches and coaches of other sports make more than $100,000.

According to records obtained by First Coast News, the head football coach at Valdosta receives a $35,753 supplement for 12 months to coach football. His assistants make between $14,000 (offensive and defensive coordinators) to $5,000 supplements (special teams kicking coach). Athletic directors and athletic trainers both make $10,000. The Boys basketball coach makes an $8,500 supplement.

All data was obtained through public records request or the Open Georgia website.

“When you hire a coach, you certainly look at how much he made and where he came from. We feel like with the lifestyle we have here being on the coast and certainly with the fan base and booster club here we can certainly be competitive and we were able to give him a significant raise,” Waters told First Coast News in 2016.

In most cases, the money to pay for these coaches’ salaries (including state base salary, head football coaching supplement, extended day contract) comes from the school district’s general fund. In some high schools, it is not uncommon for a coach to be the school’s athletic director as well, meaning a higher salary.

In Florida, schools have a much different approach to coaching and teaching. According to the National Education Association, the average teaching salary in Georgia is $54,190. In Florida, the average salary is $49,199.

For perspective, Georgia football coaches in some cases make nearly 4 times as much as their Florida counterparts.

Waters believes the trend to start paying coaches more began around 2005. As the salaries began skyrocketing, he remembers a golden rule of hiring coaches from his predecessor.

“Be careful when you hire coaches. You know a lot of them are trying to play you to get raises at the school they're at and certainly whenever we have a high-profile job there will be people that apply and you wonder why they're applying because they have great jobs now but they're applying," Waters said.

"They may get an interview, they may not, but they want to be able to go back to their school and say 'hey I'm applying for this job ...' in hopes that they'll get a raise,” Waters says.

And in some cases, school districts can’t afford a particular coach at such a high salary, Waters said. “If we don't feel like we can pay them what they want to make during the interview process a lot of times the booster clubs will get involved and offer them compensation beyond what their annual salary will be,” Waters said. “You also see booster clubs paying assistant coaches now to kind of help keep assistants around too because it's hard to find good quality assistants that will not only teach your kids but support the head coach.”

Money paid to coaches through booster clubs isn’t subject to public records and therefore as accessible. Money paid through the booster club also doesn't apply to a coaches retirement fund.

It is just the way it is now and Waters expects it to continue.

One hundred and twenty-one miles west of Brunswick, Ga. is the epicenter of high school football in Georgia. In Valdosta, winning impacts more than just the X’s and O’s.

“Are you worth a hundred-thousand dollars”? First Coast News asked Valdosta High head football coach Alan Rodemaker. “After this year, most people would probably say no. After last year maybe so,” Rodemaker said.

“I know what a hundred-thousand-dollar job is…this is maybe a million-dollar job,” he said jokingly.

“The expectation of high school coaches now, in addition to all we do with character and academics, just on Friday nights is to win,” he said.

In south Georgia, winning is quantified on more than just a scoreboard, increasing the pressure.

“If you're winning games, district morale is very high and you're able to support those other sports that are not revenue generating sports,” Valdosta City School Superintendent Dr. William “Todd” Cason said. “The accountability is great. The pressure is great.”

Valdosta High doesn’t back down from the pressure or expectations. The Wildcats were the first program in the nation to reach 900 wins.

“We check their grades, check their eating habits, we check what they do on the weekends. We monitor them very closely to make sure they stay on track and graduate.”

So, what are the consequences of an unsuccessful season for a high-school football team?

baseball and what the other non-revenue sports do,” Rodemaker said.

Valdosta’s success on and off the field has led coaching salaries to increase statewide, Cason says.

“I think in years past, everyone tried to live up to the standard of Valdosta and so as teams in school districts began to put things in place that would compete with what were we were doing here in Valdosta, I think the one thing they found is that they have to get a quality football coach into their program and so course if you're competing for the best coaches around the state you get you get them and recruit them based on how much you pay them.”

And besides the extra cash, Rodemaker says investing in coaches leaves a game plan that

“We are changing a lot of kids in a lot of positive ways,” Rodemaker says.