The NCAA will be handling refunds for ticket holders after it decided to not let fans into March Madness games amid coronavirus concerns. 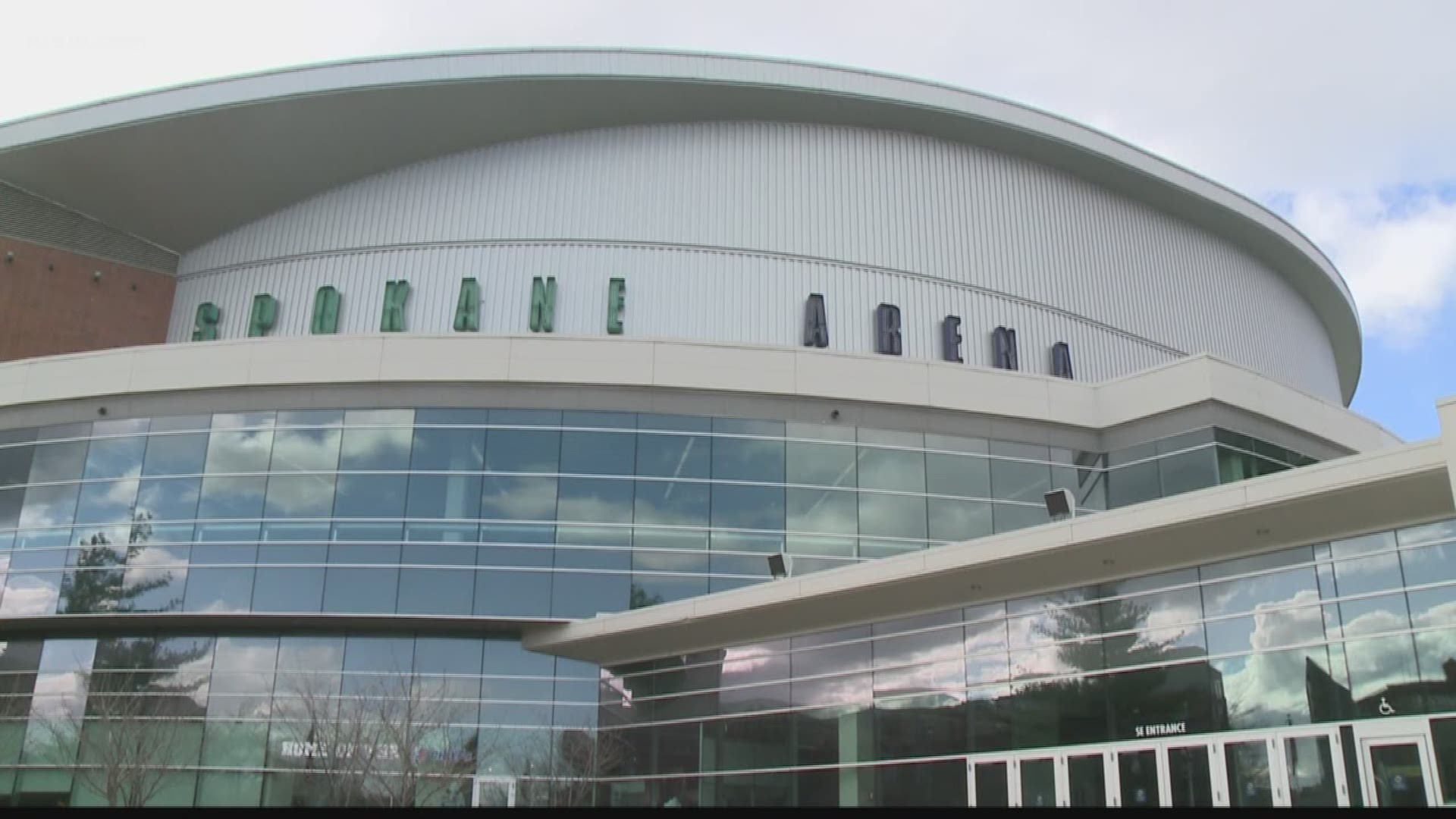 SPOKANE, Wash. — A number of Spokane-area events are being impacted by coronavirus concerns, including the cancellation of the NCAA Tournament and Spokane's St. Patrick's Day Parade, and the postponing of some concerts.

There are nine confirmed cases of the 2019 novel coronavirus in Spokane County.

On Friday, March 13, Governor Jay Inslee closed all public and private schools until April 27. He has also closed all restaurants, bars, fitness and entertainment venues for the rest of March, although restaurants can still offer take-out and delivery.

Here is a list of all Spokane events canceled or postponed by coronavirus concerns., and services that have been suspended. It will be updated.

The Chris Young concert scheduled for May 7 at the Spokane Arena was cancelled Friday.

Refunds are available at the original point of purchase. If tickets were purchased online or over the phone, the order will be automatically refunded.

STCU announced on Thursday that it will temporarily close some of its branch locations to make the best use of resources during the coronavirus outbreak, provide effective social distancing for staff and members, and maintain consistent service for 202,000 members.

The facilities plan calls for maintaining full services at more than half of the credit union’s 23 branch locations in the Spokane region, North Idaho and Tri-Cities. It will leave drive-through lanes open at most other locations.

The plan calls for closing only five branch locations by next Monday, and maintaining full service at remote locations like Newport, Washington, and Bonner County, Idaho.

In addition, the credit union will limit the number of members in some branch lobbies at any given time. That number will vary depending on branch size.

All branches will reopen as soon as the health crisis has ended, said Ezra Eckhardt, STCU President and CEO.

All external ATMs will remain open.

The temporary changes will allow STCU to redeploy some of its employees to the highest volume branch locations. Others will assist members by phone, secure messaging, and live chat.

A significant number of credit union employees also are working from home, and STCU’s largest workplace – its Liberty Lake headquarters – has been divided into quadrants to keep workgroups small.

Schweitzer Mountain announced on Wednesday morning that it was "closing lift operations and all winter activities" at the close of business Wednesday.

On Tuesday night, Bloomsday organizers decided to postpone the race until Sept. 20. The race was originally scheduled for May 3.

If you can't make it to the September race date, your entry will be extended to Bloomsday 2021.

On Monday, Mount Spokane announced it will suspend operations.

Leaders of the resort said their office will be available via telephone and email starting Wednesday, March 18 to address any questions.

Silver Mountain will also be closed until Friday as a precautionary measure.

Silver Mountain
Silver Mountain Resort will be closing for the next 3 days as a prec... autionary measure due to the widespread concern over COVID-19. The current plan is to be open on Friday, March 20. Please stay tuned for updates in the coming days: bit.ly/x726ydh We appreciate your understanding and patience during these challenging times.

The City of Coeur d'Alene has canceled all indoor recreation activities until further notice, starting on March 13.

First Interstate Center for the Arts cancellations and postponements

Spokane Public Library will close all locations to the public effective at 6 p.m. on Saturday, March 14.

These closures will remain in effect until at least April 13.

All physical material due dates will be extended to Monday, April 13. Book return drops will be closed.

The Northwest Museum of Arts and Culture will be closed until March 31, at which time leaders will reevaluate.

All programs and meetings scheduled at the museum through April 24 are canceled.

NCAA leaders announced the cancellation of the Division I men's and women's 2020 basketball tournaments, and all remaining winter and spring championships, on Thursday.

"This decision is based on the evolving COVID-19 public health threat, our ability to ensure the event do not contribute to spread of the pandemic, and the impracticality of hosting such events at any time during this academic year given ongoing decisions by other entities," a statement reads in part.

NCAA President Mark Emmert previously announced on Wednesday that both the men's and women's NCAA Tournaments will be played without fans amid coronavirus concerns.

Gonzaga was likely going to be a one or two seed in the tournament after winning the West Coast Conference Tournament, and would have likely played in Spokane for the first time in the men's program's history.

RELATED: 'No words to describe it': Gonzaga's season ends with March Madness cancellation

All major Division I conferences, including the Pac-12 and the Big Sky, also canceled the remainder of their conference tournaments.

Washington State University has canceled all athletic competition through the end of the academic year, which is May 8, 2020.

The school has also suspended all organized team activities for all varsity sports until at least April 2, 2020.

The football team has a lot of eyes on it through spring time. The first spring practice was supposed to take place on March 27, so spring football will be postponed by at least a few days.

The spring football game is scheduled for April 25, 2020. Barring any other postponements, it is scheduled as usual. However, in a press release from the university, nothing is certain past April 2.

RELATED: WSU cancels athletic competitions through May 8 due to COVID-19

The Spokane County Fair and Expo Center announced on Friday that it is canceling all scheduled events with more than 250 attendees for the next 30 days, effective immediately.

Coffee with a Cop suspended

"Due to the current healthcare climate in WA, Coffee with a Cop events have been suspended until further notice. We hope to see everyone again once CwaC resumes in the future," the Spokane Police Department wrote on Twitter.

The band cancelled the west coast portion of their tour and plan to reschedule.

We plan to reschedule this “Movies & Music” event.

NOTE: This event is at Rockwood South Hill Event Center

Fit For A King concert rescheduled

Fit For a King's concert at The Knitting Factory in downtown Spokane has been rescheduled from April 8th to July 11.

Those who hold on to their event tickets as they will still be valid for the rescheduled date.

The Canadian Hockey League, the parent league of the Western Hockey League, announced on Thursday that it was suspending the remainder of its games. The Spokane Chiefs is a member team of the WHL.

Once on this Island performance canceled

WestCoast Entertainment canceled the performances of Once on this Island on Thursday.

The show was set for March 17 and 18 at the First Interstate Center for the Arts.

In a press release, WestCoast Entertainment said they hope to bring the production to Spokane in the future but exact dates are unknown at this time.

People who purchased tickets through TicketsWEst, BroadwaySpokane.com or TicketsWest.com will automatically receive a full refund.

Cher announced the postponement of all concerts on her tour effective immediately on Thursday.

This includes her show scheduled at the Spokane Arena for May 2.

“Ï'm heartbroken, but the health of my fans and my touring family comes first. The shows have been really special but, nothing is more important than everybody's safety. I’m excited to see everyone when we’re back out on the road.” said Cher.

The Spokane Arena announced Thursday afternoon that the JoJo Siwa show that was scheduled for March 29 has been postponed.

They say ticket holders should hold on to their tickets. The tickets will be honored on the rescheduled date on June 21, 2020 at the Spokane Arena.

The Friendly Sons of St. Patrick announced on Wednesday night that the 42nd Annual St. Patrick's Day Parade, scheduled for Saturday, March 14, had been canceled.

The news release cited recommendations from public health officials for the cancelation.

The performance of Baby Shark Live! at the First Interstate Center for the Arts has been postponed and will be rescheduled for a date to be announced.

The show was set to take place on Thursday, March 26.

Tickets to original date will be honored. If you are unable to attend the rescheduled date, contact 1-800-325-7328 or twspokane.support@ticketswest.com for information on refunds.

The Spokane Jazz Orchestra (SJO) has postponed the concert “Rhapsody in Blue: The Music of George Gershwin” at The Bing from March 14 to May 23.

The concert originally slated for May 23, “The Great American Songbook” with guest artist Keleren Millham, will be rescheduled to a summer date to be announced at a later time.

Those with a ticket for March 14 concert should hold onto it and use it on May 23. If you have a ticket to the May 23 concert, you can use it for the summer concert.

Those who are not able to attend the rescheduled performances may get a refund for their tickets through TicketsWest.

The 57th annual Ham on Regal, a show at Ferris High School put on by parents, has been canceled after a request from public health authorities.

Ham on Regal averages around $85 thousand dollars in proceeds, earning more than $2.5 million in the program's history, all of which has benefited the school.

Productions began on Wednesday, March 11, and performances on Friday through Sunday have now been canceled.

Providence Healthcare and Kaiser Permanente announced that the Bloomsday Training Clinics set to begin on Saturday, March 14, have been canceled.

The seven-week program would have been offered every Saturday morning through April 25.

At this time, the 2020 Lilac Bloomsday Run on May 3 is scheduled as planned.

It was also announced on Wednesday that the 2020 Pacific Northwest Qualifier, which was scheduled to take place in Spokane, was also canceled.

The Washington Middle School Basket Championships have also been postponed after receiving a legal directive from the Spokane Regional Health District, according to a post on the championship's website. Sawyer said at the presser that they are working to reschedule the tournament in the coming months.

An official said the Spokane Chiefs games scheduled for Friday and Saturday are still planned as normal.

The Spokane Sports Commission, Spokane Public Facilities District and Visit Spokane held a joint press conference on Wednesday at the Spokane Arena about the NCAA's decision and how it impacts Spokane.

SSC President and CEO Eric Sawyer said all of the impacted agencies and departments are trying to inform the public of the impacts of this move. He added that Spokane's economy is set to take an estimated $4 million hit.

This would have been the sixth time Spokane hosted the NCAA men's tournament, Sawyer said.

"Its always a disappointment when we can't allow the fans into the building and experience what that excitement is," Sawyer said, adding that they stand by the NCAA's decision in "doing what's right" for fans and student-athletes' health.

While it isn't clear yet who would be allowed in the building, Sawyer also said at one point that the games will still be broadcast. The NCAA hasn't made clear yet if any changes to broadcasting for the games have been made.

Matt Meyer, director of entertainment for the Spokane Public Facilities District, said refunds will be given to all fans and that the NCAA will be the group deciding how and when those refunds take place.