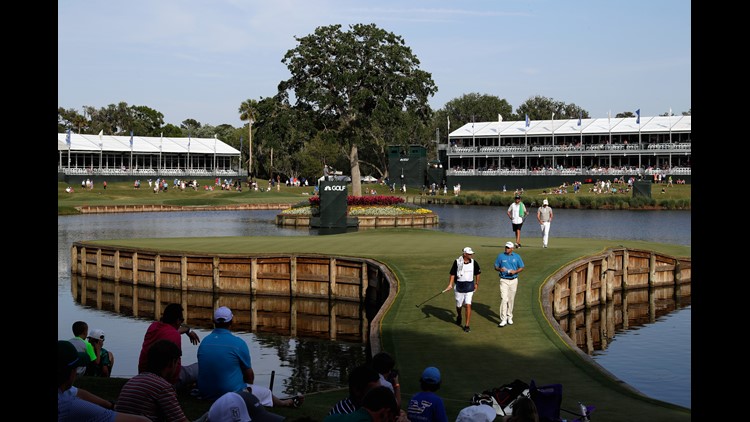 Photo by: Jamie Squire
PONTE VEDRA BEACH, FL - MAY 11: Bill Haas of the United States walks from the 17th green during the first round of THE PLAYERS Championship at the Stadium course at TPC Sawgrass on May 11, 2017 in Ponte Vedra Beach, Florida. (Photo by Jamie Squire/Getty Images)

Getting ready for The Players: Stadium Course is lush, fan amenities nearly finished five weeks out

It’s only one month and a handful of days until Players Championship week begins on March 12 at the Stadium Course at TPC Sawgrass.

“We are on schedule to be completed and ready to go in terms of having the course in championship condition and all the fan amenities built on time,” Players executive director Jared Rice said on Monday. “We will use all 36 days left but we are at or ahead of schedule in every area.”

The shell of most of the hospitality venues are built, and Players officials saved some time by leaving some areas of scaffolding up after last year’s tournament.

The floor of the Stadium Village and the 25,000 square-foot merchandise center, which have been relocated from near the clubhouse to the Nicklaus Gate entrance near the public parking lot, are in place. Food courts, picnic areas and other public gathering places have been cleared.

And the 7,215-yard playing surface that the best professionals in the world will compete on March 14-17 is as green as the brightest emerald, thanks to the overseeded rye grass that has replaced the bermuda used in May since 2007.

This will be the 46th Players Championship, the 38th at the Stadium Course and the 43rd in Ponte Vedra Beach.

Commitments from star players began pouring in last week, led by Rose, Thomas and McIlroy, the last three FedEx Cup champions. Raising the purse to $12.5 million, the largest in golf, plus the allure of the Stadium Course and returning the event to its former spot as the first significant golf championship of the year, is likely to sew up another star-laden field by the March 8 deadline.

• The Captain’s Club, located on the bank between the 16th and 18th fairways, is a public hospitality venue that offers views of both fairways and the 18th green. The price will be all-inclusive with beer, wine and food.

• A new entrance to the course from the Nicklaus Gate will include food service, merchandise and information booths and signage to get fans started on their day at the course.

• The path from the Couples Gate has been paved and is now the entrance point for fans who use Uber to get to the tournament.

• New food vendors will include V Pizza and Mini-Bar donuts. Other fan favorites, such as Taco Lu’s Tacos on 12 and Trucks on 10, are back.

• With the March date and the possibility of chilly weather, more hot food and beverage items will be offered, as well as the sale of long-sleeved shirts and jackets in the merchandise areas. Rice said fan areas are being restructured with lower temperatures in mind.

“We’ve opened up some areas to allow fans to sit and congregate in the sunshine, which is where they want to be if the temperatures are in the 70s. When they were in the mid-80s and higher in May, we were sort of pushing them into the shade. Food vendors are going to feature their signature fare but there will be more seasonable items.”

Rice continued to stress the importance of fans purchasing parking passes for competitive rounds (parking will be free on March 12 and 13 practice-round days). Because of the loss of about 10 percent of the available spaces due to the construction of the PGA Tour headquarters, parking is likely to sell out before tournament week.

Parking is free for cars with four or more people but vouchers must be printed from The Players web site. The Players is urging fans to use alternative transportation such as Uber.

Rice said the tournament has slightly more volunteers than in May, with a total of more than 2,200. He said moving the tournament to March enabled more “snowbirds” -- retired people who live in the until spring, when they return North -- to volunteer.

He said corporate hospitality sales have been strong, with the venues around the Nos. 16, 17 and 18 corridor “pretty much spoken for.”

The Players also is getting more regional and national companies investing in hospitality venues, such as Home Depot.

“It’s a combination of things,” he said. “We’re getting ‘climate dollars,’ companies in cold-weather areas coming down to entertain at an event of significance, and being in the first quarter [of the fiscal year] helps. Engaging customers in the first quarter is important to these companies.”