Florida's girls are ready to wrestle, "too"

With FHSAA sanctioning, sport ready to "explode" in the coming years in the Sunshine State 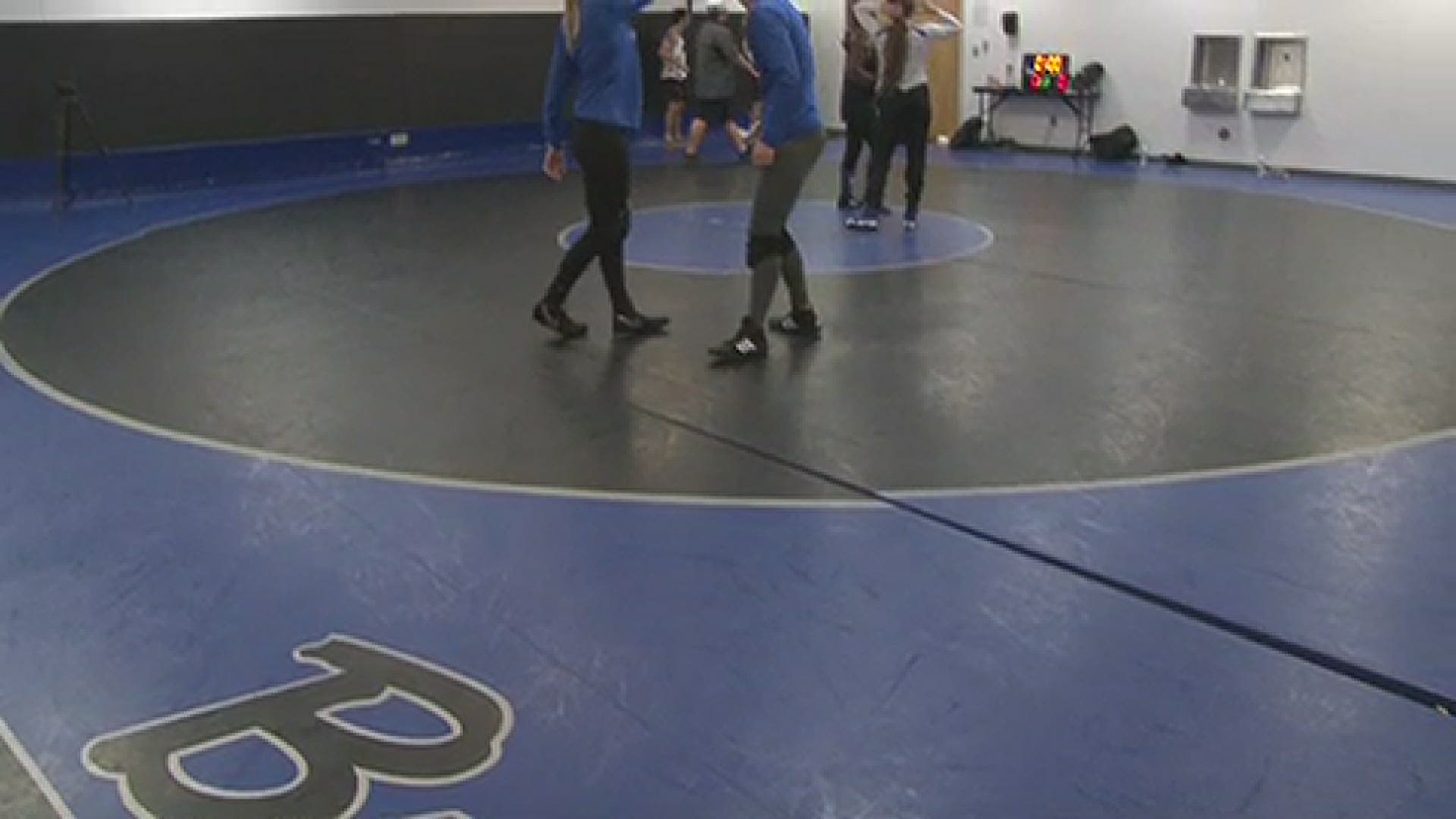 “My brother did wrestling a couple years ago.”

“I came to high school and I saw two other girls – Ellie and Talia were doing it – so it pushed me to want to start.”

And once they start…

The potential has long been there.

But “girls wrestling” remained unsanctioned by the State of Florida.

“But I wasn’t even sure about her,” the 19-year, Flagler Schools employee said.

Fast forward a few years, and there is something White is sure of: the potential for one of the nation’s fastest-growing sports.

“There’s a lot of other pockets in Jacksonville that have 1, 2, 3, 4 girls that didn’t even exist not even 2 years ago,” White explained. “Clay High School, they have 10-11 solid girls. Ponte Vedra had 14 girls.

“I know there’s potential there.”

Leading the way in Northeast Florida is White’s Matanzas Lady Pirates, who have jumped from one girl to more than a dozen in five years. Once the number of female wrestlers in his program began to rise, White approached Matanzas High School about having a separate girls team. Starting in 2019-2020, he now solely focuses on the girls’ program.

“It was time. It was time for me to give the girls their go – have a full-time head coach that just focuses on them,” White said.

The results have followed: Matanzas placed fourth overall at the 2020 State Championships hosted at Dr. Phillips High School in Orlando, the only non-Orlando or Miami area school to finish in the Top-10. Their annual, “Lady Pirate Duels” has grown from a few dozen wrestlers to a couple hundred in just four years.

“There are girls out there that want to do it,” White said. “You just have to make it available to them.”

But the sport remained unsanctioned.

“I heard about what Coach White at Matanzas had been doing,” Josh Bratovich, then an assistant boys wrestling coach at Bartram Trail High School, explained. “And so I went down there last year with [our] two girls to their Lady Pirate Duels. And it was crazy. I had no idea it was that big.”

It spoke to those two girls in the Bears’ wrestling program, too.

“[In September], they were like ‘hey coach, C’mon. We’ve got other girls that wanna do it. Will you come in the morning? Will you get this going?’” Bratovich recalled. “I said ‘look, if you get the girls here, we can build it together. Absolutely. Let’s do it.’”

Their numbers fluctuated over the course of the season – 7 a.m. workouts can certainly do that – but the Bears did bring three girls to the State Championship in February 2020. The first girl in the Bears’ program, Talia Megas, placed at State in 2019.

“At first they were like ‘why is she in here?’ Freshman girl, trying to wrestle,” the now-junior recalled of her first Bartram Trail wrestling practice. “As the season progressed, they saw I was there to wrestle. And that I was one of them – I was a wrestler.”

But the sport remained unsanctioned.

“That’s one of the hardest things to do: recruit girls. Because they immediately think ‘oh I’m gonna have to wrestle boys,’” White explained.

And even if the girls themselves are up for the challenge, their family may not be.

“I had wanted to do it since my freshman year, but there were no other girls,” Ellie Sutherland of Bartram Trail explained. “But now that there was finally a girl (Megas), my mom finally let me start.”

For many years, even if there were multiple, female wrestlers at a school, their membership fell under the boys program – meaning that, if they wanted to compete for a “State Title,” they must compete against the boys. But as more girls have begun to join their school’s program, “girls only” tournaments began being hosted in Florida. An annual “Girls Wrestling State Championship” began. Moreover, at the club level, Florida was beginning to emerge on the national scene.

“Florida has a top-5 program in the nation,” White explained. “Last year, we had two AAU teams at Disney Duels – which is a big tournament. I believe they finished 4th and 5th. I brought a team to Disney Duels last year and we won.”

And as more and more “girls only” tournaments began being hosted across the state, confidence continued to build among its wrestlers.

“It was just weird seeing how many girls are out there doing the same thing that you’re doing. Because when you’re here, you feel lonely. And you’re like, ‘eh, well it’s only me and you,’” Matanzas senior and three-time State place-winner Angelina Bermudez said. “But when you go to another tournament, you’re like ‘oh my gosh! There’s so many other girls that are in the same position I’m in!’”

Now, would the State of Florida make a move?

By May 2018, there were six states that had sanctioned girls wrestling as its own sport at the high school level (Alaska, California, Hawaii, Tennessee, Texas, and Washington).

By May 2020, that number had grown to 24 states – including Florida’s neighbor, Georgia.

It had been brought to the FHSAA’s Wrestling Advisory Committee for sanctioning several years ago. For various reasons, it was not approved – and the process to be approved is a two-year cycle. So, it was back to the drawing board until 2019.

So, why does “sanctioning” matter?

“I feel like when they sanction it, just the whole aspect of it being so official,” Megas explained. “Like, for the guys, they have Districts, Regionals, all these other events. And girls, you just have a [single] tournament. It’s not [a competition] that builds up to the next [event].

But was Florida’s governing body ready?

“Last year was the first year it was unanimously approved [by the Wrestling Advisory Committee],” White said. “It took the next step and went to the athletic directors and they voted unanimously.”

A final vote was scheduled for early May, but was postponed due to the coronavirus pandemic. More waiting.

Then, on June 9, the athletic directors voted unanimously again at the FHSAA Board of Directors meeting. Girls wrestling will officially become a sanctioned sport beginning with the 2021-2022 school year.

The potential had, at long last, been recognized.

“Now that they know there’s an opportunity every weekend to wrestle just girls, I think you’re going to see it explode in Florida,” White said, adding that now Florida can truly compete against “the California’s, the Texas’” of the wrestling world.

The girls will wrestle on a mat right next to the boys’ at State Championships in Silver Spurs beginning March of 2022. As Megas noted, that moment will go beyond the symbolic:

For more information on the growth of girls' wrestling, visit http://www.nwcaonline.com/growing-wrestling/growing-womens-wrestling/states-continuing-to-sanction-girls-wrestling-on-the-rise/ .