The team honored the Olympic decathlete during a football game and is motivated by his success. 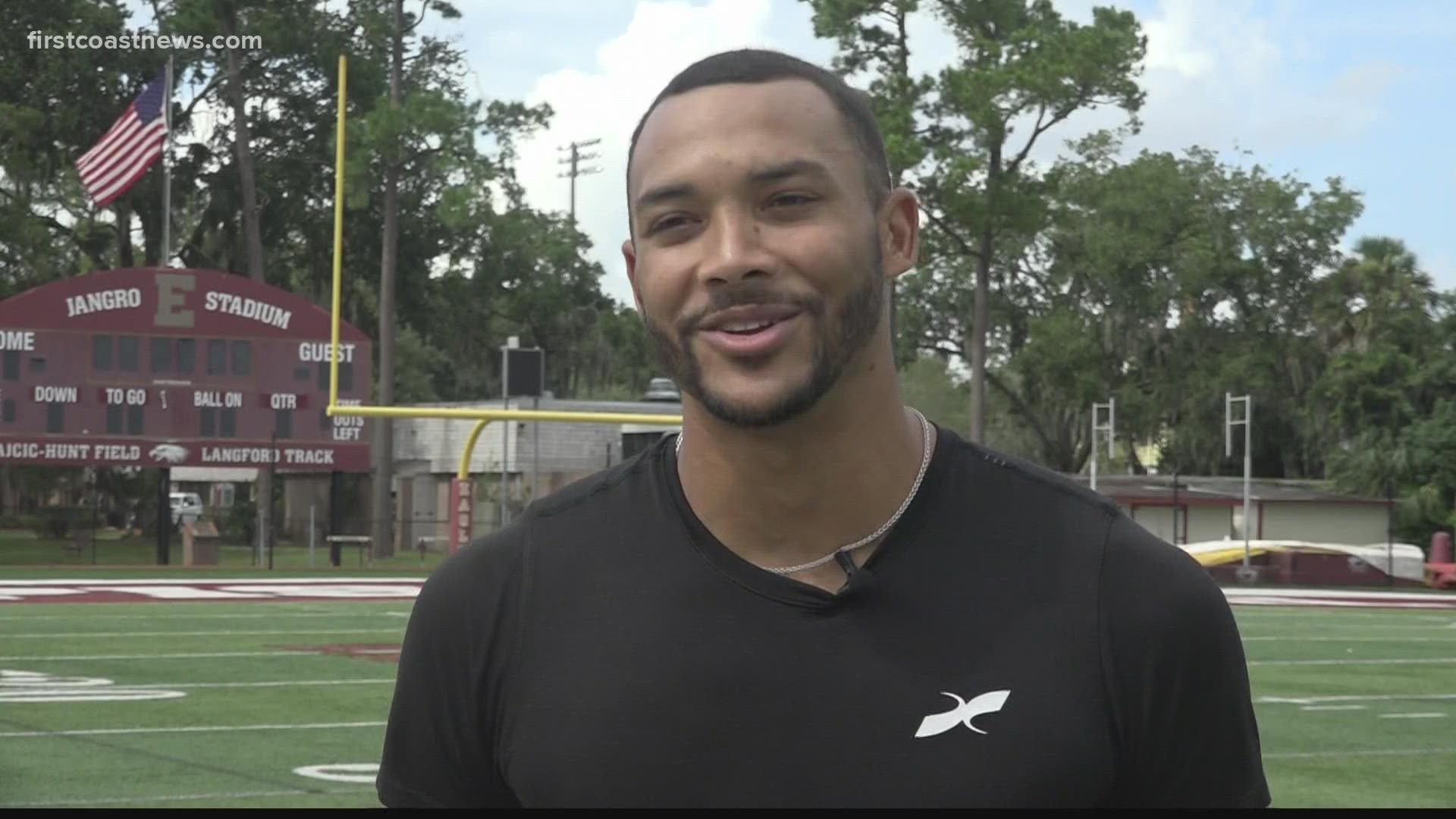 JACKSONVILLE, Fla. — Garrett Scantling made the First Coast proud in the Olympics in Tokyo. He's going to train for the 2024 Olympics in Jacksonville, and he's motivating the Episcopal Eagles, where he was a star in high school football and track, to work hard and dream big.

The Jacksonville native is known for his success on the track, but he also played on the Episcopal football field and is leaving a mark on the new generation of players.

The moment of coming in first place in the decathlon earlier this year at the U.S. Olympic Trials all started in Jacksonville.

"My English teacher was actually the one that came up to me and wanted me to do track and field," Garrett Scantling said.

Charles Hunt, Sr. coached a young Garrett on the track.

"On the track, he was a very good competitor, a very competitive competitor," Hunt said. "He always worked hard."

Scantling's competitive spirit quickly shined on the football field as well. He played on both sides of the ball as a wide receiver and defensive back.

"As he grew, he became more and more important part of the football team, and we built our offense around him. He would work before practice and after practice," said Brooks Collier, Scantling's high school football coach.

Ershod Jasey is a senior at the Episcopal School of Jacksonville plays running back for the Eagles. The talk Scantling gave the team before their game last Friday had a big impact on him.

"That work ethic for him got him to the Olympics," Jasey said. "It shows the sky's the limit."

Jasey and his teammates are inspired to work hard after the team honored Scantling on the field last week.

"Everything came full circle, and I'm going to be here helping out, coaching, and helping these kids as much as I can," Scantling said.

Plenty of obstacles stood in the way of Scantling's success.

He needed to finish in the top three at the 2016 U.S. Olympic Trials to make it to Rio. He finished fourth.

Before that, Scantling got signed and then cut by the Atlanta Falcons.

"Perseverance is everything," Scantling said. "I hope to show the kids that if you put your mind to something, and you put the work in, you can do it."

Scantling never let the roadblocks stop his pursuit of success, and he has this message for the team.

Garrett still has three track and field records at the school and he has an even bigger goal to win the decathlon at the 2024 Olympics.

Scantling plans to coach kids in track and field in the school.

Jacksonville native @Gscant27 was a star in both #football & #trackandfield @EpiscopalEagles before finishing 4th in the decathlon @Tokyo2020 Olympics. The full story on how he's inspiring a new generation at his old high school 5:30p Friday on @FCN2go @FCNsports#TeamSideline pic.twitter.com/9Et7RoFBrx

ICYMI: My story on @EpiscopalEagles grad & @Olympics decathlete @Gscant27 being honored by & inspiring the #football team will air @FCNsports @FCN2go at 5:30 p.m. today as our Heart of the Game story. For those out of the viewing area, you can watch the newscast live on our app. pic.twitter.com/yc6FFGJOw9