Four decades after he starred in bowl games for the Boilermakers, Turner graduated alongside his daughter Ella. 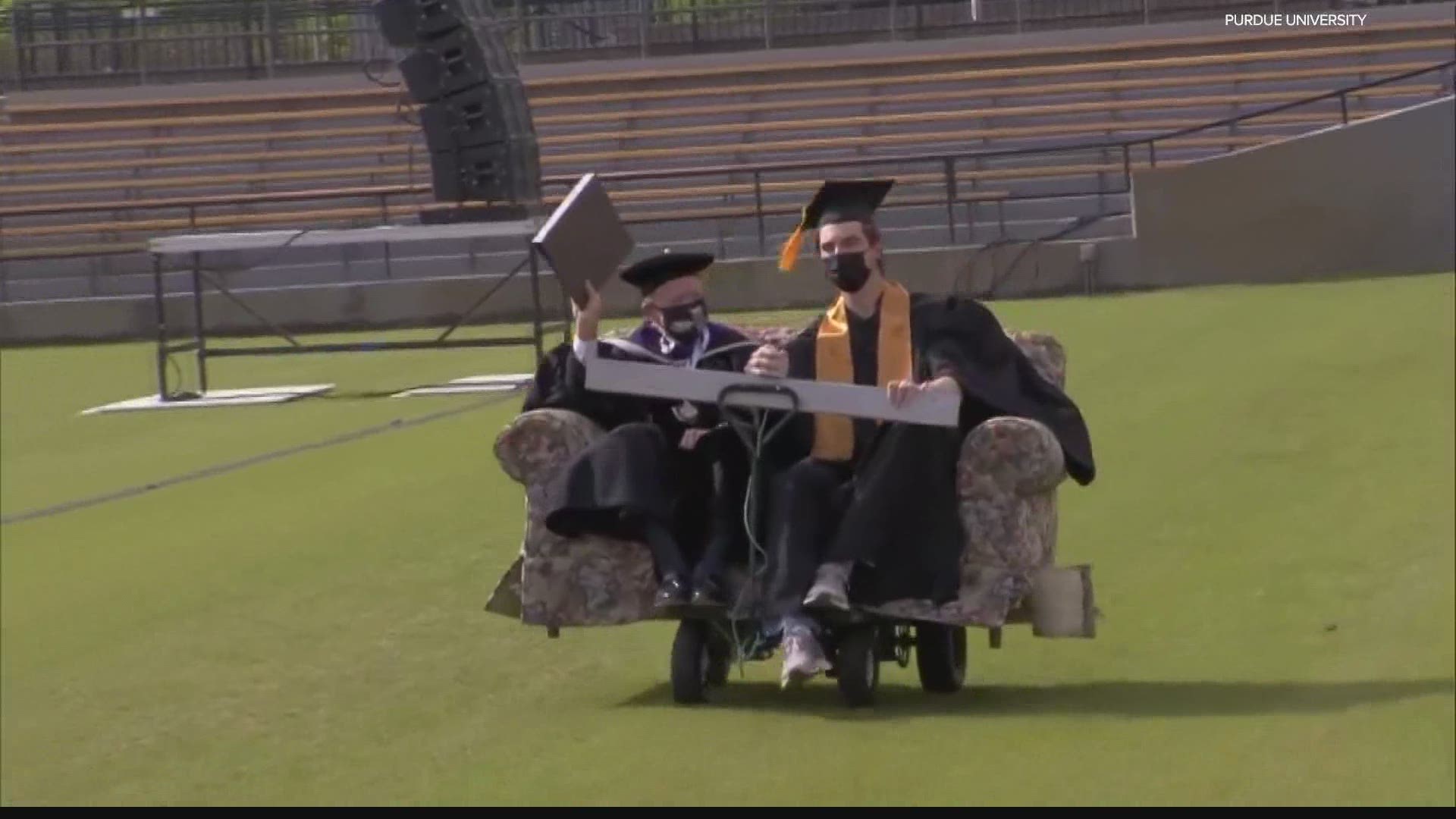 WEST LAFAYETTE, Ind. — Keena Turner ran into Purdue's Ross-Ade Stadium in front of a lot larger crowds during his days playing football than when he took part in the school's first graduation ceremony in the same stadium May 15.

Four decades after he starred in bowl games for the Boilermakers before going on to earn Super Bowl rings with the San Francisco 49ers, Turner graduated alongside his youngest daughter, Ella.

"It's pretty special," Turner said in an article shared by Purdue Athletics. "First, for my daughter to be here for four years and graduate is great. But for me to be a part of that special day along with her? It's pretty cool."

As a senior in 1980, the school said Turner was a handful of credits short of his bachelor's degree when the 49ers picked him in the second round of the NFL Draft. He joined the NFL and played more than a decade with a team that won four Super Bowls, then retired and took a job working in the team's front office.

He also finished his degree at the University of San Francisco. But not having a diploma from Purdue seemed to nag him.

"He had his degree," said Ella. "But he always felt bad he didn't get his degree from Purdue. My mom was so encouraging for him to do this."

Linda Turner started calling different departments at Purdue to figure out what it would take for her husband to finish what he had started in West Lafayette.

"My wife was pushing it uphill by herself for a while, but to have this opportunity with my baby girl was really special," Turner said. "We got to a point where the opportunity was there to walk with her. Once I heard that, I was all in."

Keena began taking classes last fall while continuing to work for the 49ers. He enrolled in a supply-chain management class and a physical geography class online, which presented some unique challenges for a 62-year-old. "That geography class kicked my butt," Turner said. "We had chapters due every week and proctored quizzes online three times a week."

Once, when he was on the road with the 49ers in Florida, Turner was facing a midnight deadline to take an online quiz but the hotel's Wi-Fi went out at 11:15 p.m. He was frantic but then realized, "I was on east coast time and had until midnight on the west coast to finish the quiz," Turner said. "I remember a time when there were no cell phones so this is all pretty new to me." Fortunately, his classmate/daughter and his two other children were able to help when dad's tech acumen fell short. "It was definitely a team effort by the whole family at times," Turner told Kate Snow of NBC News about the experience.

Any additional gray hairs Turner added through the experience proved to be worth the trouble. "He told me he would only do this if we could graduate together and wanted to make sure I was alright with it," Ella said. "I told him of course I was okay with it. It's awesome. I'm so proud of him."

She said Turner took his classes very seriously, "He wanted to learn and stay on top of things."

Ella grew up in California but still chose Purdue after making trips to campus with her dad when she was a child. She spent time during her years on campus helping the John Purdue Club as a student volunteer and intern, working events where "it was always fun and I loved getting to meet alumni and donors."

Of course, Keena was more than happy to make campus visits and reconnect.

"There's the tagline of 'It's never too late,' he told Snow. "But I hope this serves as an example that it's true."

During one visit when he addresses the Purdue football team, Turner said, "I've got four Super Bowl rings that are in my sock drawer at home but my college diploma is hanging on my wall."

Now he has a second one from Purdue's Polytechnic Institute - to go with his All-America awards.