It's the number one killer of children. Yet no one is talking about it. Until now. Victims and their families share their stories with First Coast News. 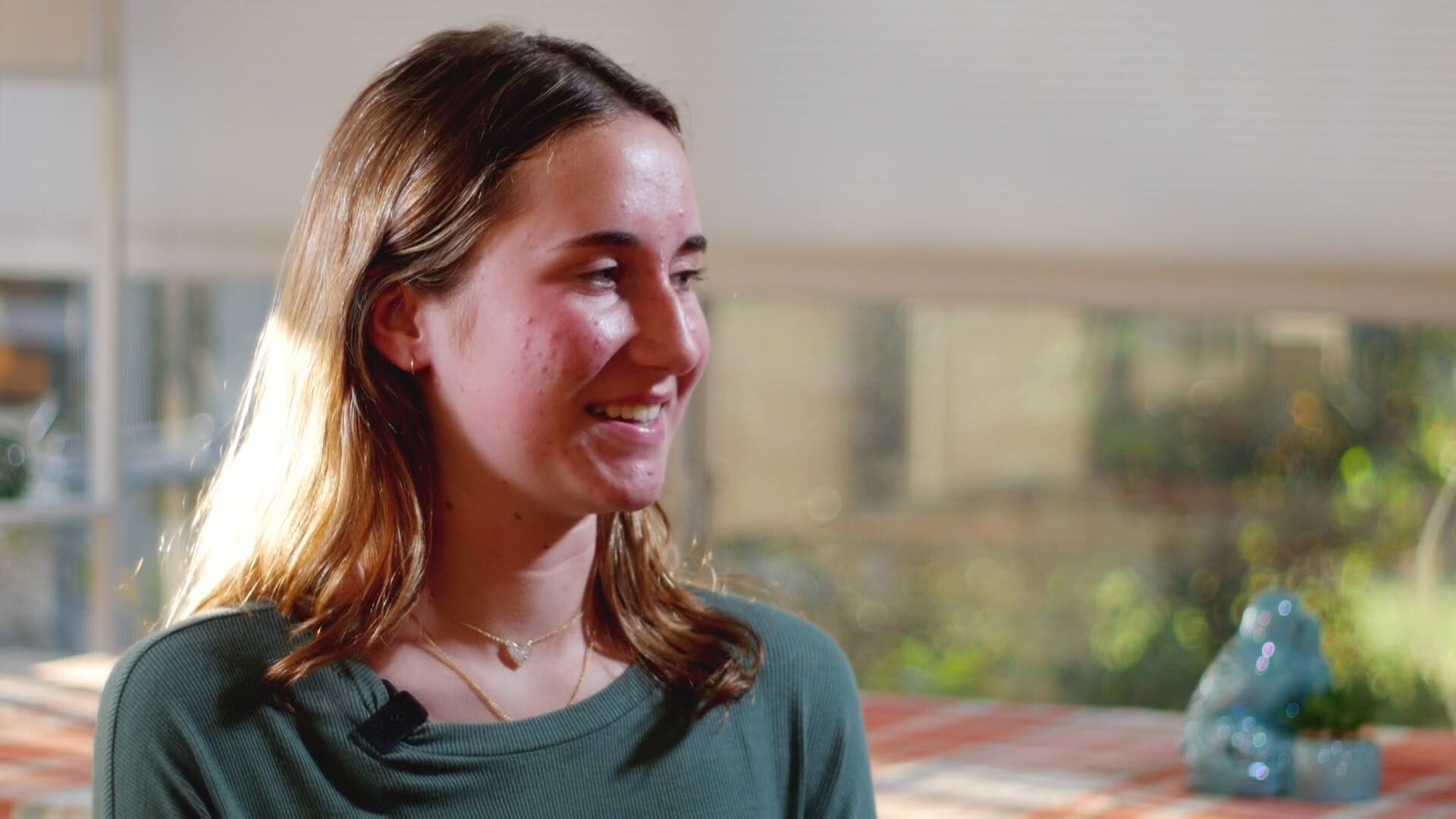 Not her classes at Seabreeze High School that day. Not heading to a preseason conditioning work-out for basketball after school. And certainly not collapsing on the school's gym floor during warm-up's. All she remembers is waking up at Wolfson Children's Hospital in Jacksonville several days later and asking her mother for her cellphone.

"It's definitely weird that like, I died. And now I'm alive again," the sophomore said recently in an interview at her home.

Julia is back at school now; she was back with her cheerleading team on the sidelines for Seabreeze football games less than a month later. While she was diagnosed with Long QT syndrome, Julia has been cleared to play sports. She recently was gifted her first car and is eager to hit the open road. She is 100-percent back to "normal."

But Julia and her family now live a new normal. It goes beyond the internal cardiac defibrillator Julia will now wear the rest of her life. The Bosset's mission in life has shifted.

“You always think something like that would never happen to your kid," Lori Bosset told First Coast News recently. "And now, we met a family the other night whose son didn't make it. And I’ve met a lot of people online that they’ve had more than one child die of sudden cardiac arrest."

While Julia was in the hospital, Shawn Sima desperately sought to contact the Bosset's. A Jacksonville-native, Sima's daughter, Lexi, went into sudden cardiac arrest in 2016 at a local gym. Like Julia, Lexi survived thanks to some quick-acting bystanders, one of whom just happened to have completed a CPR certification class the week prior. And like the Bosset's, his daughter's own sudden cardiac arrest story spurred Sima to want to help others.

"I'm a Physician's Assistant. I’ve done probably 1,500-2,000 sports physicals," Sima explained. "I had no idea about this until my daughter was being life flighted to Orlando.”

The statistics are staggering. More than 7,000 young people under the age of 20 will go into sudden cardiac arrest each year in the United States. 9 out of 10 do not survive. And of the 10-percent who do, only 3-percent return to a "normal" life.

Credit: Shawn Sima
Shawn Sima says make no mistake: this is not a competition. He and these other SCA families do not want any young people to die. But they also want others to see just how prevalent sudden cardiac arrest has become and how deadly it is.

“It happens 20 to 25 times a day in our country, but it's so scattered and spread out or a kid goes to bed and dies in his sleep, and you never hear about it," Sima added.

"If [Sima] didn't reach out, if that story didn't run in the local paper, we may be thinking we're the only ones," Winter Gardens resident Joe Cobb said. Joe's 20-year old son, Matthew, collapsed at work while operating a forklift in late-November 2020. A co-worker and Joe's brother tag-teamed CPR for more than ten minutes until emergency officials arrived. Matthew has since made a full recovery.

"We’re part of a larger family," Matthew Cobb reflected recently. "The Sima’s, [Who We Play For Foundation co-founder] Evan Ernst. [And it's] been around a lot longer than us."

“I don't ever want a family to feel like I felt with my daughter," Sima explained. For him, there has been no more, fulfilling moment than when the Bosset's reached out to the family of a SCA victim in Baker County. The chain remains unbroken.

"We're all in contact. And that's what I want. We're not alone. This is not -- this is not something that happens one in a million.”

Not in the slightest: one in 300 youth have an undetected heart condition that puts them at risk for SCA.

"It really feels like Florida is blowing up right now with cases, but the reality is: it's happening everywhere," Jeff Bosset, Julia's father, explained.

Beyond fostering a sense of community and fellowship, this "heart fraternity" is taking tangible steps to lower those numbers.

"Part of our hashtag is law, not luck," Sima smiled. "Because it shouldn't depend on a guy just learning CPR to save Lexi."

Senate Bill 280 and House Bill 157 have been introduced to the Florida State legislature largely thanks to the hundreds of emails, letters, and testimonies from victims and their families. Their goal is two-fold:

1. Mandate a one-hour, hands-only CPR course for high school graduation. Florida is one of seven states that does not currently require such a course.

“We do fire drills once a month. We haven’t lost a school child in a fire since 1958 in the United States. It’s working," Sima explained. "But the number one killer, that we don’t do drills for.”

Working with state lawmakers, Sima had proposed a bill similar to House Bill 157 and Senate Bill 280 in 2018. The bill passed, but only after lawmakers changed the wording from "mandated" to "encouraged."

Credit: Shawn Sima
Florida is one of seven states in the United States that does not mandate a CPR course as a high school graduation requirement.

As of April 2, 2021, House Bill 157 is now in the PreK-12 Appropriations Subcommittee. Wording once again did have to shift: the focus for this piece of legislation is the mandated, one-hour, hands-only CPR course.

Because there's another change the group is also working towards:

2. Make EKG screening part of a high school sports physical in the state of Florida. Only two states, Texas and Pennsylvania, encourage these screenings.

The goal isn't just to react to victims of sudden cardiac arrest: it's to help prevent such tragedies from ever occurring.

“When included in the standard physical, it takes the physical from about one to 4% effective in detecting heart conditions, to about 90 to 95%. So, miles better," Evan Ernst, co-founder of Who We Play For, explained. In 2007, Ernst's teammate, Rafe Maccarone, went into sudden cardiac arrest at soccer practice. No one on the field knew CPR. Boys sprinted around the school, searching for an AED (Automated External Defibrillator). Rafe passed away the following day. It was later discovered Rafe had a heart condition, hypertrophic cardiomyopathy (HCM), that could've been detected via an EKG screening.

"Other countries do this. In Italy, every kid gets an EKG every year, and in their country, they reduced cardiac death by 90%.”

Ernst's foundation works with area healthcare providers and school districts to offer affordable heart screenings. EKG screenings can now be conducted for as low as $20. Yet aside from Brevard and Osceola County, where Sima, Ernst, and their team have convinced the districts to require EKGs, no county in Florida requires heart screenings for student-athletes.

“To know that Duval County spent $5 million on plexiglass for COVID-19, and we’re worried about $20 for a kid's life? It's just frustrating," Sima said.

Who We Play For has helped detect dozens of would-be, potential SCA victims. For many, including Jacksonville's Nigeire Poyser, they never would've known they had a pre-existing condition if not for these screenings.

"Nigeire was one of the lucky ones who had a symptom," Ernst explained. When he went for his screening, Poyser, then a freshman football player at Ribault High School, checked-off occasional "shortness of breathe" when exercising. "Not every kid has a symptom. [Nigeire] was able to recognize it. And it saved his life."

Poyser had a procedure done following his diagnosis and was later able to return to the athletic field. Growing up on the Northwest side of Jacksonville, Poyser admits: he probably never would've known about his pre-existing condition if not for Who We Play For's screening.

"The thought of people actually having the same disease as me never crossed my mind. I really thought I was the only person in Jacksonville with this."

A one-hour, mandated CPR course. $20 EKG screenings. These are all tangible ways to both prevent and respond to sudden cardiac arrest.

Next up on this heart fraternity's agenda: making sure AEDs are readily available where young people are present. The Cobb family has already begun "Matt's Mission," helping to increase the survival rate of sudden cardiac arrest victims through AED donations, education, and training. While Matthew Cobb survived SCA thanks to his co-worker and uncle's live-saving CPR, others in their building ran to get an AED to "shock" his heart back to its standard pulse. When they retrieved it, the batteries were dead.

And even then, the Cobb's were fortunate to even have an AED in their place of work: it is not a current requirement in primary schools to have an AED.

For Dr. Sunita Ferns, electrophysiologist at Wolfson and UF Health, it's extremely frustrating. Ferns was the primary contact for Julia Bosset during her stay at Wolfson and has also cared for other SCA patients in this heart fraternity.

Bosset was one of the lucky ones. She was in a safe environment that fateful Tuesday in October. Seabreeze's assistant basketball coach, Iriabeth Lee, is also the school's resource officer. A long-time law enforcement official, Lee has been CPR certified for more than a decade, even saving an elderly individual's life via CPR in 2009. She performed CPR on Julia for seven minutes until emergency officials arrived, immediately recognizing Julia to be in sudden cardiac arrest.

And to think: Lee almost didn't go to practice that day. She had forgotten her gym clothes and debated just heading home after the school day ended.

"The fact that if Officer Lee had not been there that day, was there anybody else in the gym that could provide CPR?" Jeff Bosset reflected. "There were a lot of children in there that didn't know CPR. So, you know, she just collapses and dies on the gym floor? They don't know what to do to save her."

"Most people would just stay there and call 9-1-1 and wait for trained medical personnel to come," Lee added. "But we all can do something.”

That's why these families are trekking to Tallahassee, multiple times a month. It's why they're hosting CPR certification classes and EKG screenings at their homes, as the Bosset's did in early March.

We all can do something.

“We've had a run here in Florida... kids dropping. Keyonte Johnson at [the University of] Florida," Sima said. "And I think this year, we have a big enough posse with us from all over the state, of parents who are like us or who don't have their children, who are ready to raise the roof and try to make this happen.”

“You hear these stories of these people and their pain and how, in so many cases, good people could have been protected," Ernst added. "Once you see behind the curtain, it’s hard to look away.”

First Coast News would like to thank the Bosset, Cobb, and Sima families for sharing their stories. FCN would also like to thank Evan Ernst, Nigeire Poyser, Dr. Sunita Ferns of Wolfson Children's Hospital, Officer Iriabeth Lee, and Seabreeze High School of Daytona Beach administration for sharing their stories and helping make this project possible.

For more information on Who We Play For and accessibility to EKG heart screenings, visit their website.

Parent Heart Watch, the national voice solely dedicated to protecting youth from Sudden Cardiac Arrest (SCA) and preventable Sudden Cardiac Death (SCD), has also been critical in bringing the families of victims together.