Dismissal letters detail some of what's being investigated. Pruitt coached the Vols for three seasons, finishing with a 16-19 record. 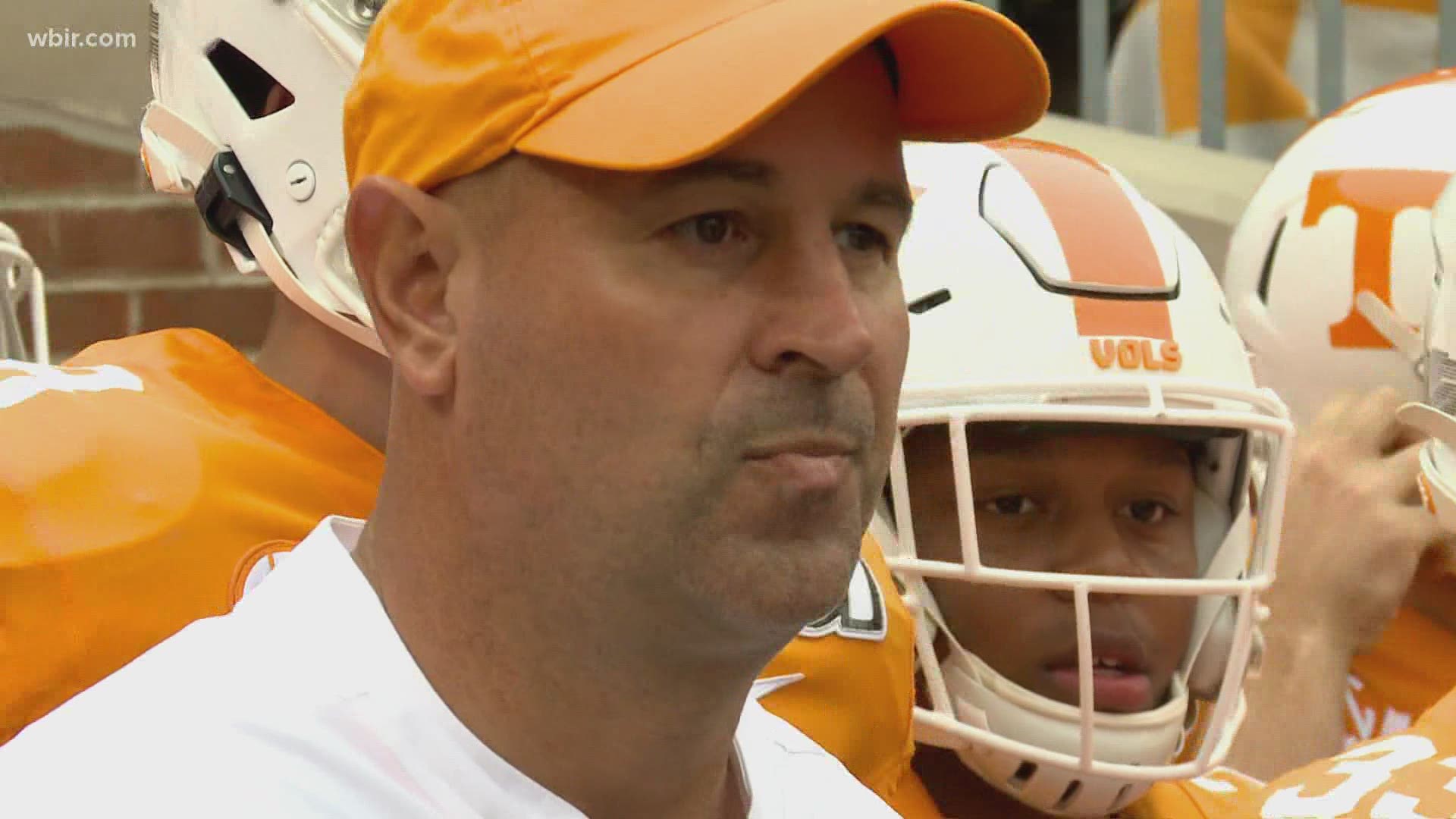 In all, nine people under football coach Jeremy Pruitt have been dismissed. Pruitt also was fired for cause, according to UT.

They include assistant coaches Brian Niedermeyer and Shelton Felton.

"It is clear from the information that we have received that you were aware of the arrangement of impermissible recruiting visits and the provision of impermissible inducements to prospective student athletes..." the letters to them state.

"It is a sad day for all of us and I hope we all rebound from this unfortunate chapter. We wish you the best of luck."

Each of the seven got the same letter, obtained by WBIR, from Phillip Fulmer, athletic director, dated Monday, Jan. 18.

"Thank you for your service to the University. I wish you the very best for the future."

UT has not named players or potential players who may have been recruited under improper conditions.

PREVIOUS STORY: The University of Tennessee is parting ways with football head coach Jeremy Pruitt, firing him "for cause" as an investigation into "serious" NCAA violations surfaced.

Pruitt, along with Tennessee assistant coaches Brian Niedermeyer and Shelton Felton, were among those fired. A total of nine employees under Pruitt's leadership, including four on-campus recruiting staff, a football quality control analyst coach, and the director and assistant director of football player personnel, received ‘Notice of Intent to Terminate’ letters on Monday.

Pruitt's termination goes into effect at 5 p.m. Tuesday. Coach Kevin Steele has been named acting head coach in the interim.

UT Chancellor Donde Plowman said the firings were due to serious Level I and Level II NCAA violations reported on November 13, 2020, but could not confirm precisely what those violations were yet because it could potentially jeopardize the investigation. She said the firings came after discovering staff in the football program tried to conceal those offenses from leadership.

During Monday's announcement, Plowman said the university in December had consulted with an outside law firm from Kansas City -- Bond, Schoeneck & King -- that specializes in investigating NCAA offenses. UT leadership recently received an update in the investigation that led them to believe the violations were credible, and said the NCAA and SEC have been notified, and the investigation is ongoing.

Plowman said Pruitt was fired specifically because, as leader of the football program per NCAA bylaws, he is immediately responsible for the actions of his staff who report to him.

"The university has concluded that these likely findings were the result of either your material neglect or lack of reasonable preventative compliance measures," Pruitt's letter of termination read. "Your failures are likely to lead to significant penalties to the University and has jeopardized the eligibility of our student athletes."

Because he was terminated for cause, Pruitt will not receive the more than $12 million buyout built into his contract.

"It was shocking," Plowman said. "This is not what any of us want for our football program or university.”

UT Athletic Director Phillip Fulmer has also decided to retire once a new AD is found. Plowman said she wanted to make clear Fulmer had no involvement with the NCAA violations being investigated, saying his "sterling reputation" remains and he will remain vital in the search for the next AD and head coach.

Fulmer said he wants the next AD to select the next head football coach, saying they are optimistic they will soon be able to attract a strong leader who will hire the right football coach for the team.

Pruitt coached the Vols for three seasons, finishing his time at Tennessee with a 16-19 record.

Pruitt’s final game at Tennessee was a 34-13 loss to No. 5 Texas A&M in Neyland Stadium.

In 2018, Tennessee finished with a 5-7 record, including two of the biggest wins during Pruitt’s tenure, a road victory against No. 21 Auburn and a home win against No. 12 Kentucky. The Vols lost its final two games of the season, failing to make a bowl.

In 2019, after starting the season 2-5, Tennessee won its final six games of the season, capping things off with a comeback win against Indiana in the TaxSlayer Gator Bowl. The Vols finished the season 8-5, just its third season with at least eight wins since 2008.

During a COVID-19 shortened season, Tennessee extended its win streak to eight games, before dropping six games in a row, tying a program record for the longest losing streak in a single season. Tennessee eventually snapped the streak with a 42-17 win against Vanderbilt.

Since 2009, four different head coaches have been in charge at Tennessee. From 1977-2008, only Tennessee had only two head coaches.

RELATED: A look at the agreement between UT and outside counsel in football investigation