Safety Derwin James only participated in the short shuttle and 3-Cone drills during FSU's annual pro day event inside the program's in-door facility. 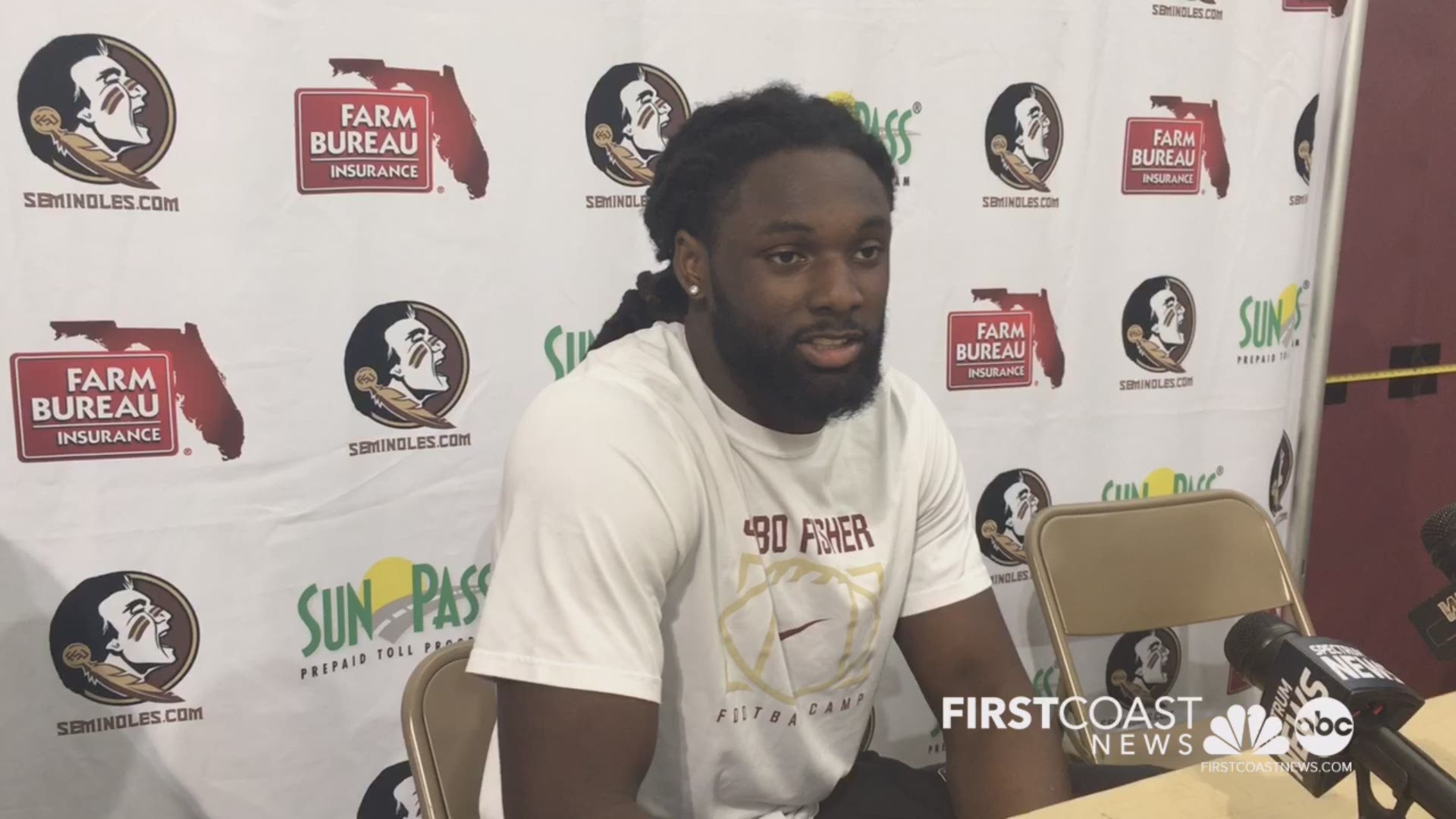 TALLAHASSEE, Fla. - Florida State's top prospect in this year's NFL Draft decided to take it easy in Tallahassee on Tuesday.

Safety Derwin James only participated in the short shuttle and 3-Cone drills during FSU's annual pro day event inside the program's indoor facility.

James stuck with his impressive NFL Combine numbers - which included a 40-inch vertical jump and a 132-inch broad jump - on his agent's advice.

While James decided to limit his workout, his confidence was on full blast during his post-pro day press conference.

Jaguars cornerback Jalen Ramsey was in attendance to show support for his former college teammates. James appreciated the gesture.

"It means a lot because [Ramsey] just was in the same position I was in two years ago," James said.

"He's seen it and he's [playing in the NFL] at a high level. He's an All-Pro corner so I'm trying to do the same as him."

James is currently projected as a Top 10 pick.

- Pass rusher Josh Sweat looks the part of a 3-4 outside linebacker. He was smooth in his movements during linebacker drills and caught the ball cleanly during his reps.

"I'm pretty sure I can do it," Sweat said, referring to the outside linebacker position.

"I feel like I flip my hips, I can catch well, I can break on the ball well. If I can just get some reps, maybe in practice, I'll be fine, I can do it."

Sweat said he has received interest from the Rams, Giants, Titans, Buccaneers and Seahawks. He said teams have told him that he can play five-technique or outside linebacker in a 3-4 defense.

Sweat said he prefers to rush the passer, as opposed to playing 4-3 outside linebacker. He is expected to be a selected within the Top 40 picks.

- Cornerback Tarvarus McFadden had a strong day with his drill work. He showed impressive ball skills and loose hips while trying to impress scouts during defensive back drills.

While he was unaware of his 40-yard dash time from the pro day, he said he knew it was better than his 4.67-second mark from the NFL Combine.

"It doesn't make you a better or worse football player," McFadden said of the 40-yard dash.

"Some people are just not good testers and some people are just blessed at testing. At the end of the day, you've got to play. Nobody is just running a 40 in a straight line down the field, so [there is] definitely things you have to work on but when it comes down to playing football, you've just got to beat the man in front of you."

McFadden said he had formal visits with the Giants, Raiders, Eagles, Cowboys and Chargers at the NFL Combine. He is expected to be a Day 2 pick.

- Defensive tackle Derrick Nnadi said he has reached out to his former high school teammate, San Francisco 49ers outside linebacker Eli Harold, during the draft process for advice.

He also got emotional when discussing his draft journey.

"Sometimes it's hard but at the end of the day it's just a blessing to be there," Nnadi said.

"This is the type of moment I've always wished to be at, ever since I was a little kid, and just to be here it's just amazing. I had to bring myself together when I was on the field at the combine, just looking at all the things I've done and just being there got me really teary eyed, just loving every single moment of being there."

- Linebacker Jacob Pugh looked very athletic in linebacker coverage drills. At 6-foot-4 and 246 pounds, Pugh just looks the part of a SAM linebacker. The Jaguars could have interest in Pugh on Day 3 of the draft.

- Jaguars scout and former running back Greg Jones was in attendance for the pro day.