University police began their investigation after a witness called 911 in reference to a suspicious person. The witness said he saw 10 people arguing and believed they had guns. The witness added, "the weapons resemble assault rifles." 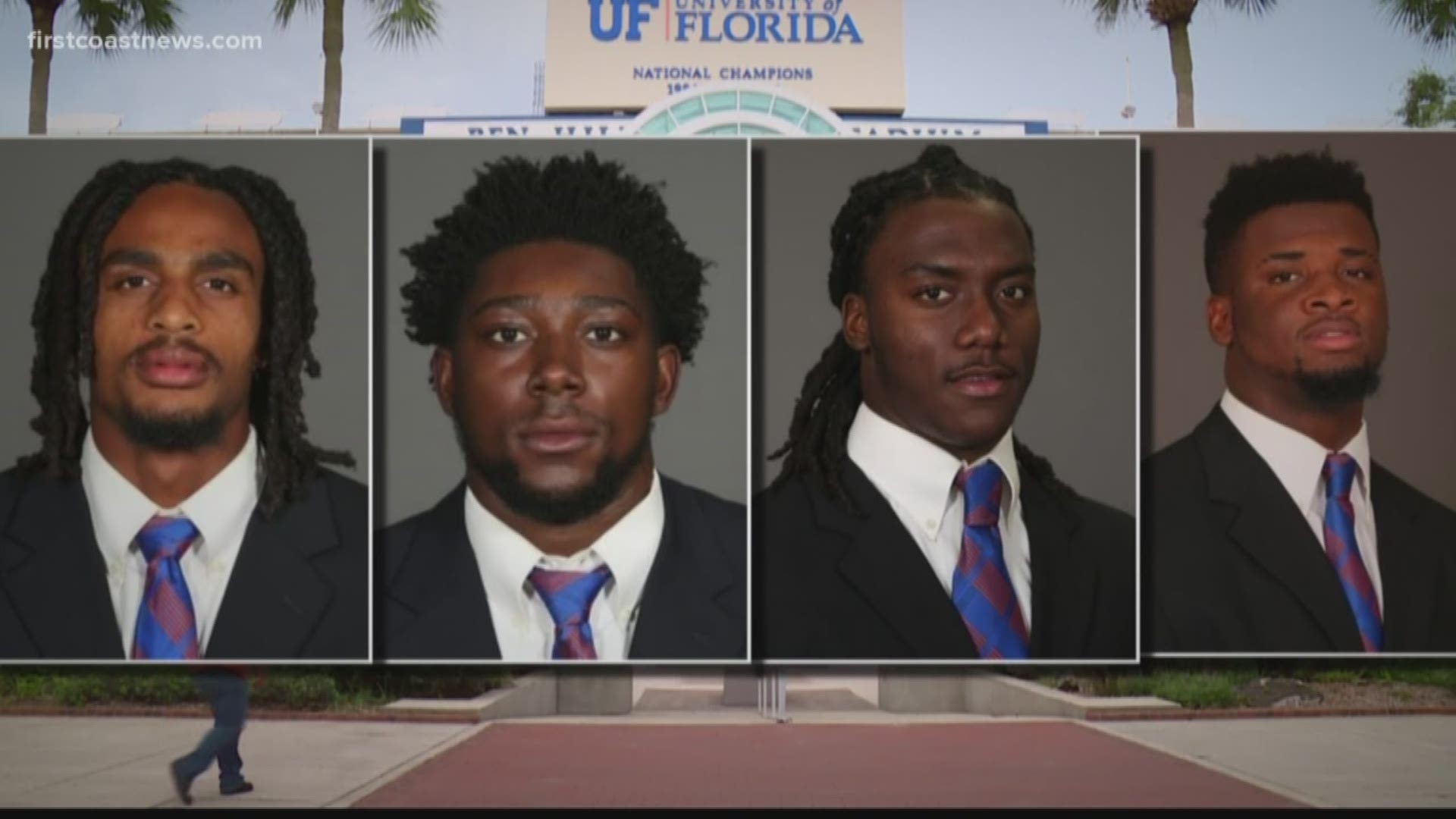 The confrontation occurred at the university's Keys Residential Complex on the evening of May 28. It involved several UF football players and a Gainesville-area gambler named Devante' Zachery - aka "Tay Bang" - and his friends, according to a UF police report obtained by First Coast News.

University police began their investigation after a witness called 911 in reference to a suspicious person. The witness said he saw 10 people arguing and believed they had guns. The witness added, “the weapons resemble assault rifles.”

The scene was captured on surveillance and cell phone video, the 17-page incident report states. The video shows "about 10–15 individuals, holding what appeared to be weapons,” according to the report.

The other group returned and a confrontation ensued. One player reported the group had a baseball bat, a red laser being pointed at another player’s chest and another individual threatening “Come any closer, I’ll spray you.”

Zachery told police, he observed one football player holding “some sort of assault rifle and some others were [holding] rocks.” Police wrote, they didn’t believe Zachery’s story and thought he was minimizing the incidents he was describing, the report states.

According to the player, once they heard police sirens, and everyone left.

According to a university police interview with UF tight end C’yontai Lewis, Zachery had a “good relationship” with Lewis “while the football team was winning, but when they began losing, “Tay Bang” would call them “garbage” and would complain about losing money after he bet on football games,” the report states.

The report also says Lewis stopped associating with Zachery. According to Zachery’s interview with police, the issues “initially began with some joking around, but has since become more aggressive.” The only person that said Zachery was gambling, was Lewis, according to police.

UPDATE: First Coast News spoke with Zachery by phone Thursday morning. Zachery claimed our report only told one side of the story, however when offered multiple times to share his side he did not.

The NCAA said in a statement:

Below is our sports wagering rule. As you will see, it speaks to sharing information with individuals:

individuals involved in or associated with any type of sports wagering activities concerning intercollegiate, amateur

(a) Staff members of an institution’s athletics department;

(c) Staff members of a conference office; and

None of the players listed above have been charged with a crime.

University police discussed with Toney how dangerous the situation could have been, as a result of using the airsoft guns that appeared real. Toney replied that other guys try and pick fights with the football players when they go out into public, the report states.

During the investigation, police reported inspecting the airsoft rifles. “The one rifle made to look like an AR15, which Toney was carrying, had the orange tip mostly painted black making it look even more like a real rifle,” the report states. Florida Gators Director of Student-Athlete Development Vernell Brown assured police the airsoft guns would not be seen on campus again, the report states.

According to the University code of conduct:

Firearms or Other Weapons Violations. Possession, use, sale, or distribution of any firearm, ammunition, weapon or similar device not explicitly permitted under University of Florida Regulation 2.001. Prohibited devices include, but are not limited to, stun guns, pellet guns, BB guns, paintball guns, slingshots, archery equipment, any dangerous chemical or biological agent, or any object or material, including but not limited to knives, capable of causing, and used by the offending person to cause, or to threaten physical harm.

This is not the first incident for the UF football team this week. Freshman Justin Watkins is facing four charges, including two felonies, after his second arrest in the past three months. In 2016, Cleveland and Wells were arrested after being accused of firing BB guns on campus and causing more than a $1,000 in property damage.

According to the report, the officer says he believes “great strides have been made to increase a better relationship with these student athletes so that they feel comfortable in reporting incidents to law enforcement when they arise.”

Dan Mullen said in a statement:

“We were made aware of the incident when it occurred and immediately began following campus protocol. This has been an opportunity for us to educate our players about the dangers and negative perceptions that can occur when conflict arises, and how important honesty and good decision making is.” 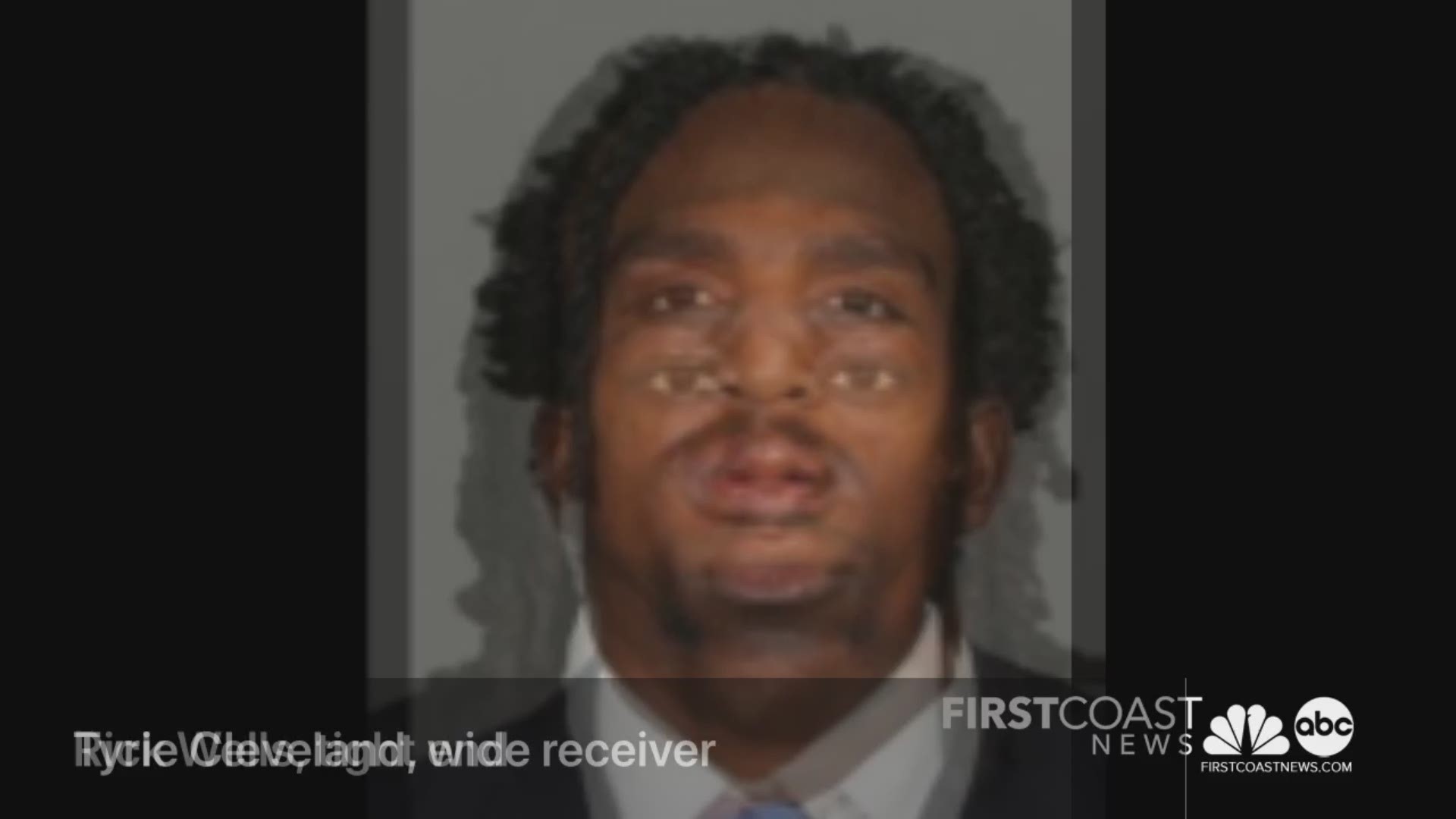