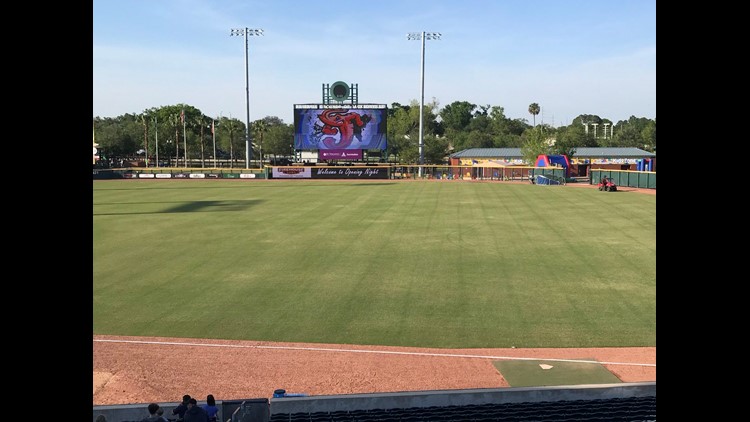 Back to the Minors: Shrimp, Sharks, highlight busy weekend at Sports Complex

Back to the Minors is our weekly look at Jacksonville's awesome minor league sports scene. This weekend is shaping up to be pretty awesome, with four games (and two fireworks shows) at the Sports Complex.
Author: Neal Bennett
Published: 2:52 PM EDT April 13, 2018
Updated: 4:19 PM EDT April 13, 2018

This weekend is the type that the Jacksonville Sports Complex was made for. Whether you like the crack of the bat or the sound of football players crashing into walls, there's a little bit of everything for you this weekend. Oh yeah, and fireworks times two as well

The Jacksonville Jumbo Shrimp continue their first homestead of the season with games against the Mobile BayBears all weekend. It's the first Fireworks Friday at the Baseball Grounds for 2018 with first pitch set for 7:05 p.m.

If that's not enough, the Shrimp are also offering post-game fireworks on the first six Saturdays of the season, including this weekend when the first 2,000 fans get a free t-shirt designed by Shrimp fan. First pitch Saturday is at 6:35 p.m.

It's OPENING WEEK that means FREE t-shirts to first 2,000 fans Saturday, courtesy of @121Financial & @atlanticssfl Buy tickets in advance to save $2 off the walk up price!

Saturday night across A. Phillip Randolph Boulevard is also the home opener for the defending National Arena League Champs, the Jacksonville Sharks. The Sharks won their opener on the road last weekend 41-38 and will take on the Massachusetts Pirates at Veterans Memorial Arena with kickoff set for 7 p.m.

Get your Tickets to the home opener THIS SATURDAY!
Click Here to get tickets for only $13.50!https://t.co/YVLaFU3iXW pic.twitter.com/28Ku5XwkmK

The Shrimp close out the busy weekend with the first "Family Sunday" of the season where kids get to run the bases post-game. First pitch as at 3:05 p.m.

Your Jacksonville Giants have made history securing their 5th ABA Championship with a 119-114 win over the Austin Bats! pic.twitter.com/rI1biyQ69H

Have fun and get out to some games this weekend. Go Shrimp! Go Sharks!

Back to the Minors author Neal Bennett is the former digital director at First Coast News. He's a huge fan of all of Jacksonville's minor league teams. He works for FCN's parent company, TEGNA media.