OPINION: Khan not interested in moving Jaguars, or winning for that matter

No, the Jags aren’t permanently moving to London but they’ve temporarily reduced themselves to the likes of a Division II football team, selling off wins for money. 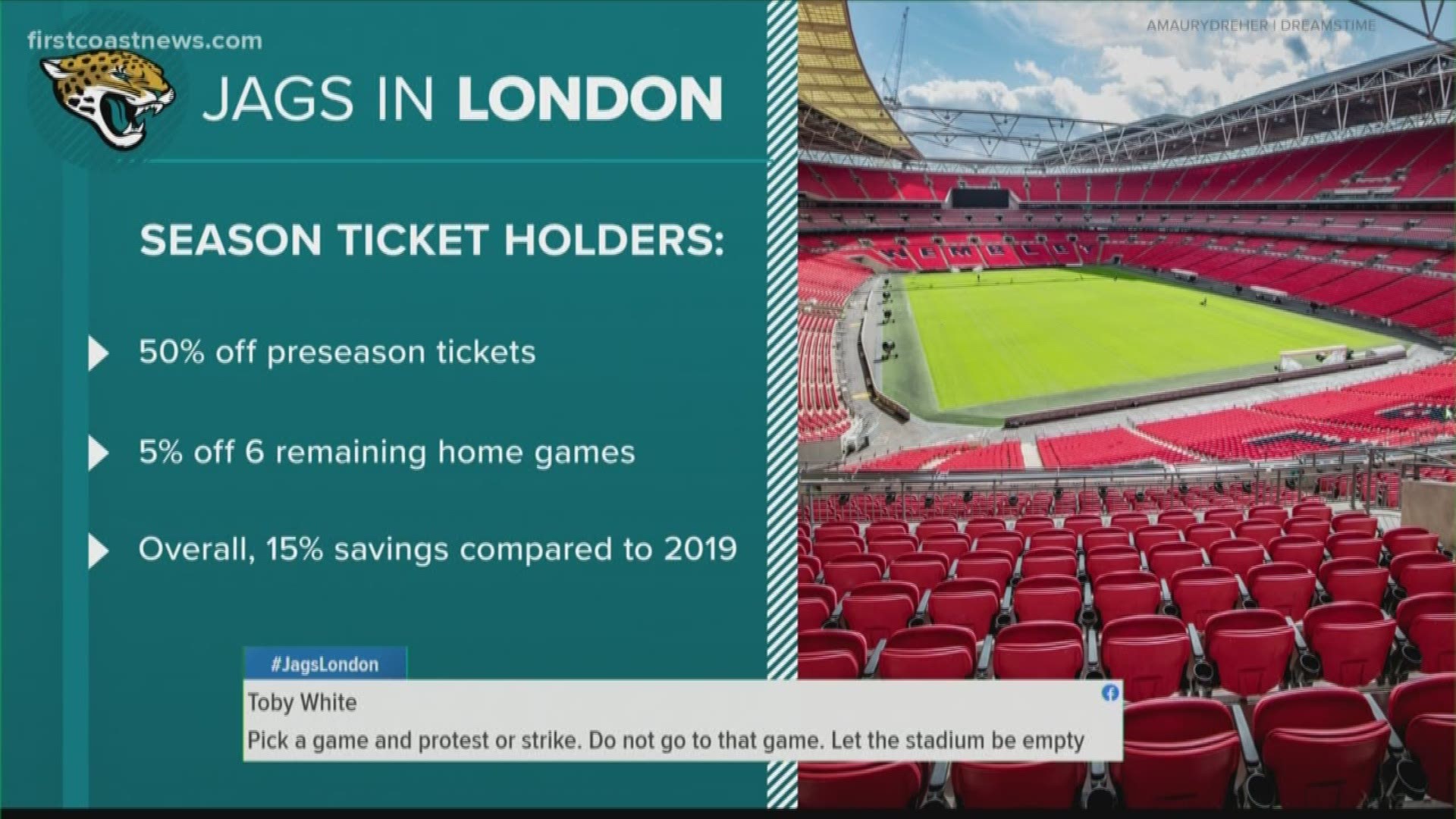 By now you’ve probably heard the news, next season the Jacksonville Jaguars will become the first team in NFL history to play two regular-season home games in London.

Oy vey, where do we begin with that one?

For starters, let’s dismiss all this talk about cost-saving for fans. Part of the front office spin from the Jaguars has been telling season ticket holders that they’ll save 15% on their ticket packages this season.

With that out of the way, I want to address my two main takeaways in the wake of this announcement.

#1. I don’t believe Shad Khan when he says he cares about winning right now

The keywords here are “right now.” I do believe the Jaguars owner ultimately wants to win a Super Bowl someday. He has allowed the team to spend a lot of money on free agency. Many of those free agents haven’t panned out, but the dollars towards winning were invested regardless of the result, and that’s the main thing fans want from a team owner.

With that said it’s pretty clear that Khan is willing to sacrifice winning for the next couple of years in the interest of contending a few years down the road.

The blame for the aforementioned free agent spending that hasn’t panned out falls squarely on general manager Dave Caldwell, yet he still has a job. So does head coach Doug Marrone. For a team that goes on the record quite often to discuss its financial concerns, it was no surprise to me when Khan decided to keep Caldwell and Marrone onboard for next season. Both were still under contract, and the Jags would’ve had to pay out a severance plus the money for their replacements.

By moving a second game to London, Khan is also further jeopardizing the Jaguars’ chances of landing game-changing talent in free agency. The Jags, for all intents and purposes, are taking on the schedule of a Division II college football team.

Your Jaguars are now the Western Carolina Catamounts (yes, that’s a real team), selling their soul to the Alabama’s of the world – taking embarrassing losses (66-3 last season) in exchange for a bigtime game check to keep the program’s lights on.

For the Jags, they’re literally selling away home games for cash, taking a 26-3 loss to the Texans over in London just last year while hopes of making the playoffs were still within reach.

Now they’re giving up two home games next year, and for free agents wanting to play for a contender, Jacksonville is certainly near the bottom of the barrel.

#2. I DO believe Shad Khan when he says he wants to keep the Jaguars in Jacksonville

First, let me preface this by giving you a little “about the author” here. I am a former fan of the St. Louis Rams, so I know a thing or two about teams moving (the Rams are unfortunately the second of two teams in my lifetime to abandon my old hometown).

When the owner of the Rams (you’ll have to google his name, I’m not typing it out here) first took control of the team in 2010, he quickly made it clear that he wasn’t running a charity and the stadium issues in St. Louis would need to be addressed. He didn’t invest a dime into the Edward Jones Dome, the surround areas, or the community, and in less than five years, he was on his way to sunny Southern California with my beloved Rams.

To Khan’s credit, he poured millions of dollars into TIAA Bank Field when he took over the team eight years ago. It’s a publicly-owned stadium and he was certainly not compelled to do that. More importantly, he’s poised to foot roughly half the bill for the half-billion-dollar revitalization project expected to begin in the coming months at Lot J. The Hart Bridge Expressway ramps will soon come down, and a business, residential, and entertainment district will hopefully soon start going up. I believe Khan would prefer this project go through rather than not since his team's lease at TIAA Bank Field lasts until 2030, when he'll be almost 80 years old.

If you watched the Super Bowl, you likely saw shots of thousands of Chiefs fans celebrating back in Kansas City. That venue those fans were packed into is one of three the Jaguars have said they’re using as a blueprint for the Lot J project down here in Duval. It would be the crown jewel of downtown, but it’s a project that depends on having a major draw like an NFL team to survive.

Building that project from the ground up, then moving the team overseas a few years later, wouldn’t make any sense.

So, I take Khan at his word that moving a second game to London will only be temporary, likely for 2-3 years until Lot J is completed, and then one of (if not both) of those home games will come back home to Duval.

Jaguars fans, you have every right to be livid. If my favorite team announced they were selling off 25% of its home games to a foreign country so that they could make more money, I wouldn’t be happy either. Then again, my (former) favorite team now plays ALL of its games in Los Angeles, so be thankful for what you have in the present. St. Louis football fans are left watching the XFL now. Be glad you’re not in that same boat.

Greg Leuthen is the Executive Producer of Good Morning Jacksonville. He doesn't tweet much, but when he does, you can bet it's gonna be a rant about football. Follow him here.