Woman finds needle in her back, claims it's from surgery 14 years ago at Jacksonville hospital

A woman who gave birth more than a decade ago at a Jacksonville hospital is taking legal action, claiming staff left a broken needle lodged in her spine and never notified her. 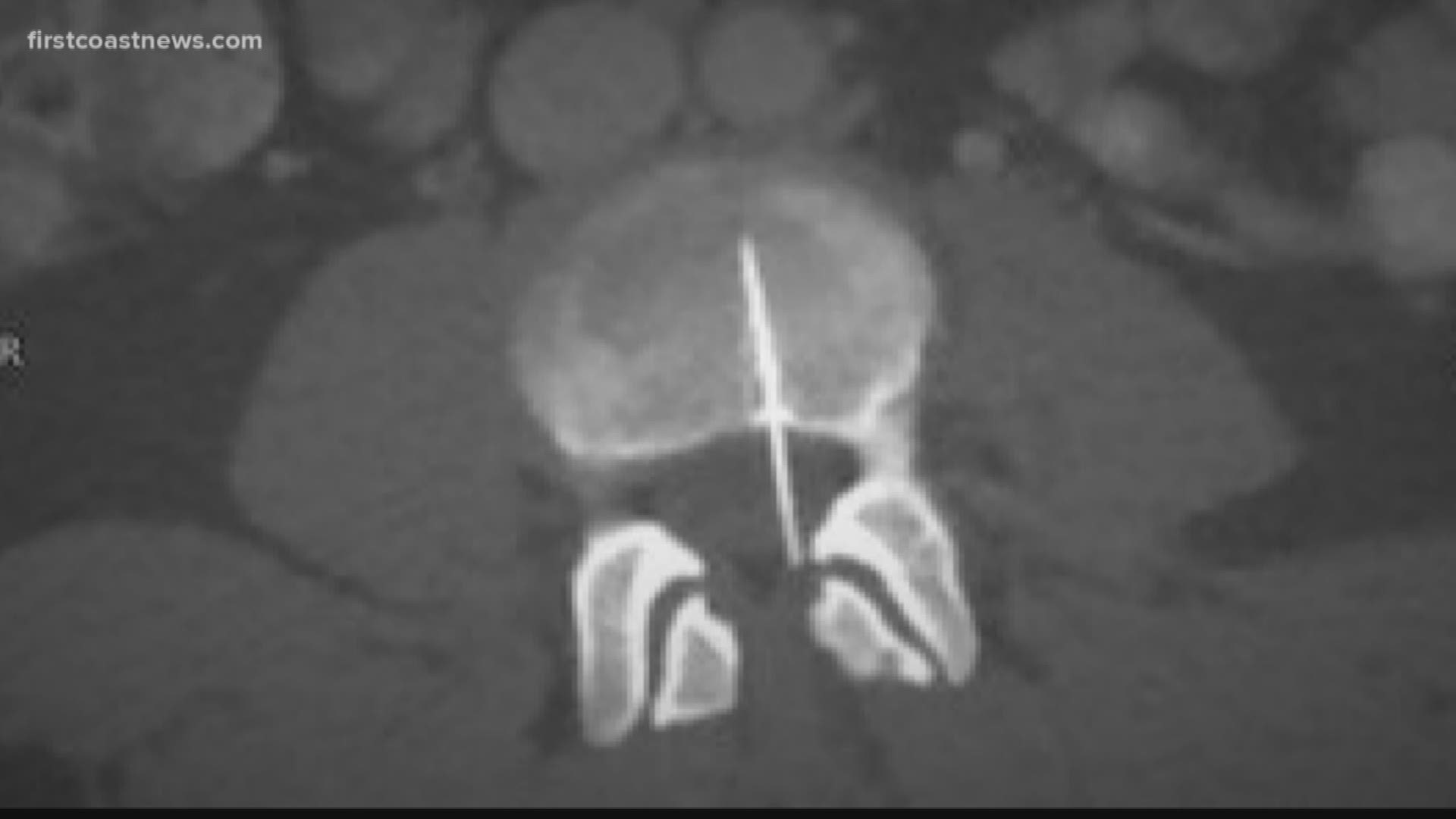 JACKSONVILLE, Fla. - A woman who gave birth more than a decade ago at a Jacksonville hospital is taking legal action, claiming staff left a broken needle lodged in her spine and never notified her.

Amy Bright delivered her youngest son, Jacob, at Naval Hospital Jacksonville in September 2003. She started feeling pain in her back and leg immediately after.

The pain hasn’t stopped in the 14 years since.

“It feels like fire, like a poker next to my tailbone,” Bright said. “And then on occasion, it shoots down the left side of my leg on my calf, like my calf side, and then down and into my foot.”

Bright and her family have since resettled in Texas, and that’s where a CT scan four months ago revealed the three-centimeter segment of needle lodged in her spine.

“I’m speechless that this was not disclosed to this woman,” Bright’s attorney, Sean Cronin, said.

Cronin and Bright filed a claim against the federal government Thursday, alleging medical malpractice, fraud and negligent concealment by the staff at Naval Hospital Jacksonville.

At a press conference Thursday, Cronin said there’s no way the hospital staff didn’t know the needle broke because the tips of needles are marked.

“When you pull out the needle, you look at the needle and make sure that tip is there,” Cronin said. “That’s missing.”

“It’s documented in her medical records that they had an unsuccessful spinal needle attempt at Naval Hospital Jacksonville in September of 2003,” Cronin said. “So no one else put a needle in her back.”

Both Cronin and Bright claim hospital staff never told Bright the needle lodged and broke in her spine, and it was never noted in her medical records.

Consequently, Bright was misdiagnosed. She said she never suspected her pain was caused by remnants of a C-section more than a decade ago.

“If they were any kind of human whatsoever, they would’ve said ‘hey, I’m sorry I made a huge mistake, let’s fix it,’” Bright said. “But instead they didn’t tell me.”

Bright said the pain is expected to worsen over time. Surgery to remove the needle is extremely risky, so she’ll likely have to live the rest of her life with the needle in place.

The government has six months to respond to the claim. If a settlement is not reached, then a lawsuit will be filed.