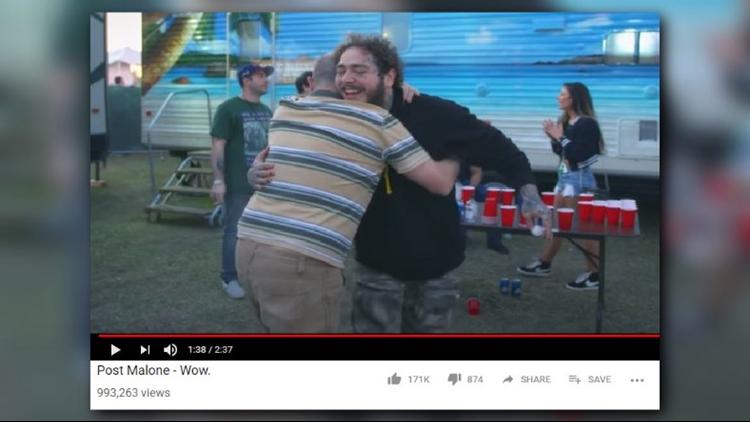 *This video and lyrics included in this music video may be offensive or disturbing to some.

The Jacksonville man with the smooth dance moves who broke the internet last week has shocked us again. This time, he's featured in Post Malone's new music video for 'Wow'.

Bearded dancer Mike Alancourt went viral after a video of him dancing to the song "Wow" by rapper Post Malone was shared online and garnered over 23 million views.

The video was shot at the 1 Vibe Dance studio on the Southside and caught the attention of Post Malone who posted it to his social media accounts. Even celebrity Will Smith gave Alancourt a shoutout on Instagram.

Then he made an appearance on "The Ellen DeGeneres Show" on Monday, where he received applause a special celebrity invite. During his appearance on "Ellen" Alancourt received a video message from Post Malone asking Alancourt to join him at his Arizona show, to which he happily obliged.

As it turns out, Post Malone absolutely loved Alancourt.

"Give it up for my special guest because he crushes that s*** every time," Malone says during his concert.

On Tuesday Post Malone released his official music video for 'Wow' and surprised everyone by featuring Alancourt.

And it's not just a small part. Alancourt is featured throughout the second half of the entire video. In the video, you can hear Post Malone say "You're a legend, thank you."