Veteran living with epilepsy fighting for better quality of life

JACKSONVILLE, Fla.—A local veteran is gearing up for a life changing, possibly life ending brain surgery. He's among the approximately 400,000 people in Florida who suffer from Epilepsy. 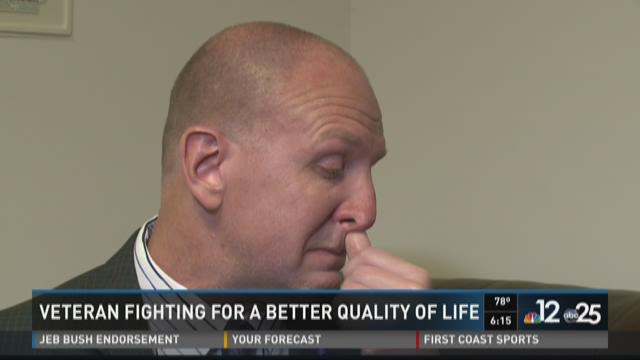 JACKSONVILLE, Fla.—A local veteran is gearing up for a life changing, possibly life ending brain surgery. He's among the approximately 400,000 people in Florida who suffer from Epilepsy.

But for Jay Hennessy, the seizures that come along with the disease average more than 100 a day. Hennessy will soon undergo an expensive and invasive surgery in the hopes of gaining a better quality of life.

He's looking at upwards of $200,000 worth of bills associated with his surgery and treatments. And Hennessy is not alone. Thousands of families face a similar fate in state, paying for treatments and medication as their loved ones battle epilepsy.

Hennessy's seizures have been so bad in the past he's broken his neck - not once - but twice. In the last year, his health has significantly deteriorated. He's experiencing memory, vision and hearing loss.

Diagnosed with Epilepsy six years ago, Hennessy has decided it's time to take extreme measures.

"Once they've determined the location where the seizures start, travel to and end, they will go in and surgically remove that portion," said Hennessy. "I am very scared but there's a lot of work to do."

When asked about his seven-year-old daughter, Jayda, and if he's explained to her the many possibilities associated with the Stereoelectoencephalogny surgery, Hennessy's eyes filled with tears.

"As it gets closer I will."

He already knows what he's going to say to her.

"Just that daddy loves her," replied an emotional Henessy as he wiped away his tears.

Hennessy has made the decision to donate his brain to the Department of Defense Epilepsy Research Program if the surgery does not go as planned.

The Epilepsy Foundation of Florida provides help to families for medical treatment and medications. But currently there's a waiting list for services due to budget cuts.

To find out how you can help in Jay's Journey click here.

The Epilepsy Foundation of Florida will host its annual Walk the Talk Fundraiser on Saturday, April 9 to raise awareness and funds to benefit Floridians impacted by epilepsy. To find find out more click here.