VERIFY: Can hand sanitizer cause your car to catch fire? 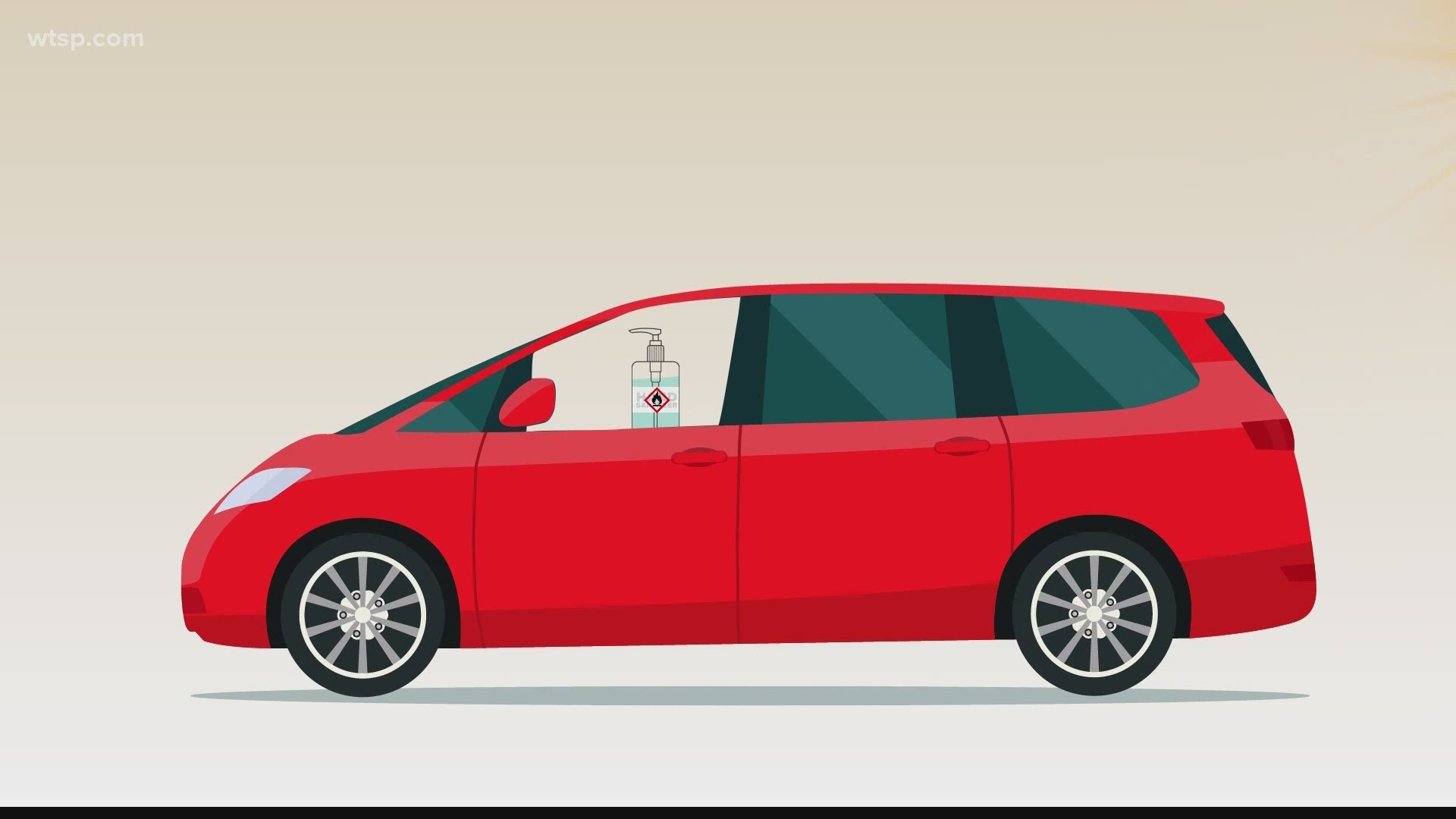 Can hand sanitizer start a fire in your car?

Yes, but it's not likely.

This VERIFY began when firefighters in Wisconsin warned drivers against storing hand sanitizer in cars.

The Western Lakes Fire District posted this image to Facebook, saying that because most hand sanitizer is alcohol-based and flammable, keeping it inside your car during hot weather can be dangerous. The department said sunlight can be magnified through the bottle, which could lead to a disaster.

The photo shows the driver's side door of a car. The interior of the door is partially melted away.

Western Lakes Fire District
Let's start today with a little education! We've chatted in the pas... t about clear water bottles being kept in your vehicle when the weather is warm. That still holds true and so does hand sanitizer! By its nature, most hand sanitizer is alcohol-based and therefore flammable.

We couldn't figure out exactly where the photo originated. But, we can confirm it wasn't taken this week. Reverse-image searches reveal the same photo posted by people in multiple foreign countries -- at least a month ago. And, it's unclear precisely what caused the fire in the photo. It wasn't necessarily hand sanitizer.

But, let's set the image aside. Our core question remains: Is it possible for hand sanitizer to lead to a fire inside a car?

For that, we asked some experts in the Tampa Bay area.

"The magnification in combination with the chemical composition could very well lead to this happening," a spokesperson told 10 Tampa Bay.

RELATED: Doctors warn gloves could spread coronavirus if they're not worn properly

But, does that mean a bottle is going to catch fire in your car? It's not very likely.

The National Fire Protection Association actually produced a video about this topic. It acknowledges that most hand sanitizer is quite flammable. But, the video makes clear that "large quantities" are what firefighters are really worried about.

And, by large quantities, they're usually talking about amounts like five gallons -- way more than you'd be keeping in your car...or probably your whole house. If you do have that much, you should be storing it in a cabinet that's designed for flammable materials.

"Although the incidence of fires related to ABHS is very low, it is vital that ABHS is stored safely and that bulk dispensers are installed and maintained correctly," the CDC explains.

Even if you are storing a lot, the World Health Organization says the benefits of alcohol-based hand rubs far outweigh the fire risks. And, the risks are low. For example, the WHO cited a study that found an estimated 35 million liters of hand sanitizer had been used in hospitals in recent decades.

"A total of 7 non-severe fire incidents were reported. No reports of fire caused by static electricity or other factors were received, nor were any related to storage areas," WHO wrote.

"All of our units have bottles of hand sanitizer in them and are constantly exposed to being parked out in the sun," a fire official told 10 Tampa Bay. "I have never heard of an instance where we have had any incendiary issues from hand sanitizer being left in a car."

The fire department said it would be possible since most sanitizers contain alcohol but added the "gel" versions don't sustain combustion after the alcohol burns off.

"Brazilian fact-checkers Aos Fatos and Estadão Verifica found that a car would need to reach an internal temperature above 300 degrees Celsius (572 degrees Fahrenheit) to cause hand sanitizer to combust," according to the Poynter Institute, which is based in St. Petersburg. "A study by Arizona State University looking at cars parked in triple-digit summer heat found temperatures topped out around 160 F (71.11 C)."

Full disclosure: The Poynter Institute is a partner of 10 Tampa Bay on our investigative YouTube series: "What's Brewing?"

So, is it possible for hand sanitizer in direct sunlight to start a fire in your car? Yes, it's possible. But, it's highly unlikely unless you're hauling around huge amounts of it. Or, unless it's really, REALLY hot.

While hand washing with soap and water is always preferred, the benefit of carrying some hand sanitizer around while you're out and about during the pandemic far outweighs the risk of lighting your car on fire.