Our VERIFY team fact-checked what the 10 candidates said during Thursday night's heated debate. 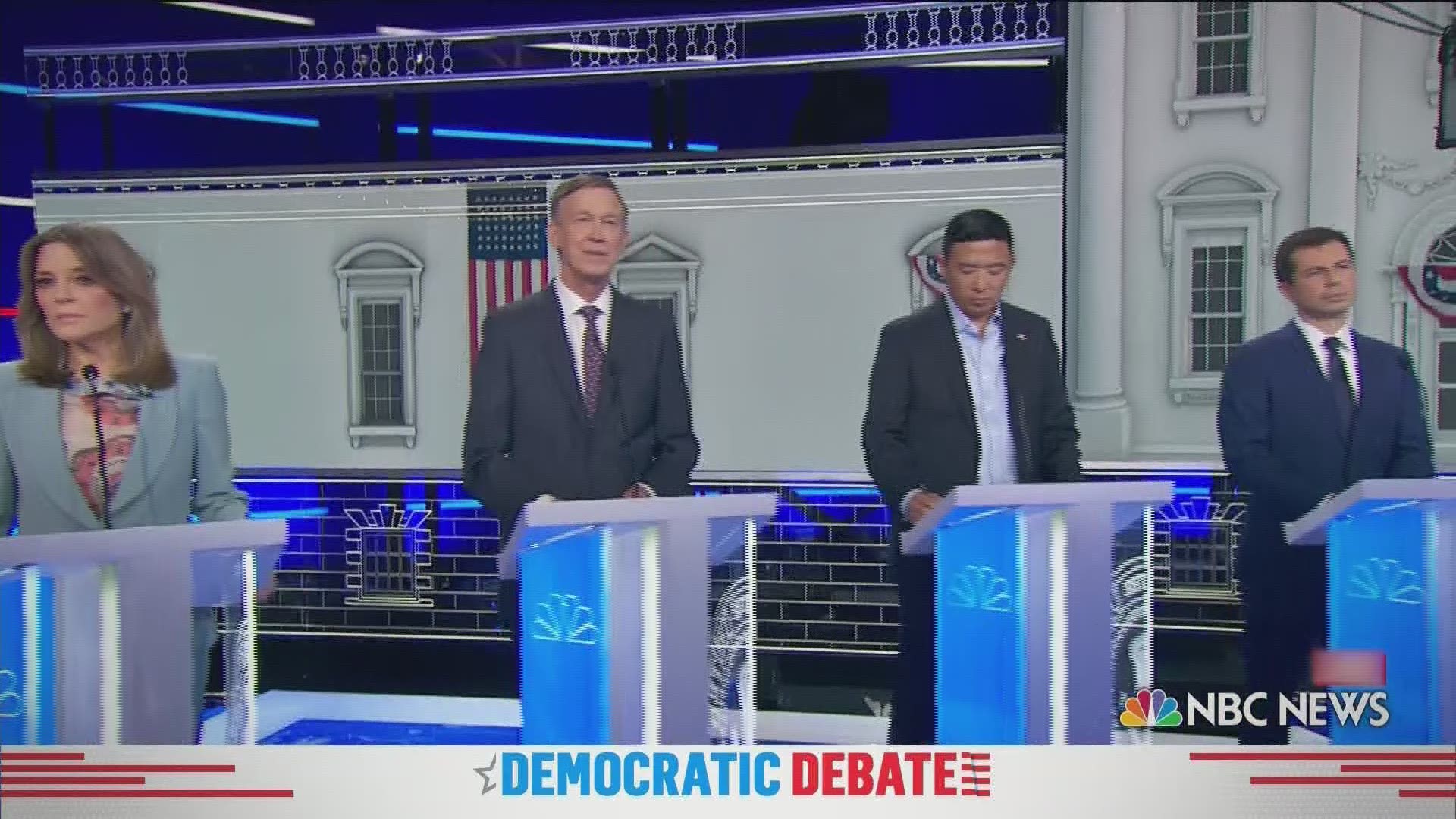 Ten Democrats seeking the presidency faced off on a Miami stage Thursday night as part of the opening debates of the 2020 campaign.

Our VERIFY researchers fact-checked what all ten candidates had to say in their pitches to the American people.

CLAIM: Sanders said three people own more wealth than the bottom half of the American public.

This is VERIFIED, true.

Sanders is making his claim based on a study from the Institute for Policy Studies. The study used the Forbes 400 list from 2018 and got their data on the bottom 50% based on their research from 2016.

This study takes into account the net worth of people. Even if people make a decent income, they can end up with a negative net worth based on student debt, mortgage, credit card debt and other debts.

This claim is mostly true, but needs context. Harris, among other Democrats including Elizabeth Warren have used this claim or something similar often on the campaign trail. But Bureau of Labor Statistics data show just around 5% work multiple jobs. Those statistics actually show the rates were closer to 6% during the mid-1990s.

This claim is mostly true, though it’s not universally true.

The reality varies from country to country, but many countries that offer socialized healthcare also have private insurance options for citizens who want them. Mayor Buttigieg was accurate that England is one of those countries. Germany, Austria, Belgium, Czech Republic, Italy and The Netherlands are all examples of countries that offer private insurance options in addition to universal healthcare.

CLAIM: Michael Bennet claimed Vermont rejected Medicare for All because it cost too much

After initially signing the first single-payer health care bill in to law in 2011, Vermont Governor Peter Shumlin later ditched the plans citing the big tax increases required to pay for the program.  The decision came after multiple financing deadlines were missed by the Shumlin administration.

“These are simply not tax rates that I can responsibly support or urge the Legislature to pass,” the governor said during a news conference in 2014. “In my judgment, the potential economic disruption and risks would be too great to small businesses, working families and the state’s economy.”

While citizens of Vermont never directly rejected a single payer system, the program was seen as Governor Shumlin signature legislation.

In addition, Vermont never had a medicare for all program, which would suggest the federally funded program be integrated in to the state’s program. This instead was a single-pipe system with payment and revenue sources streamlined outside of the federal system and exemptions to the law for several companies.

This claim is VERIFIED, true but needs context.

In the early 1970s, Biden ran on a platform of integration but eventually voted against busing to desegregate schools.

Busing was a program that would have moved students of different races to schools outside their typical districts to integrate more schools.

In 1974, Biden said: “I have become convinced that busing is a bankrupt concept.”

In the debate, Thursday night, Biden confirmed that he voted against the busing idea, but claimed it was because he wanted the decision to be handled by local governments, not the federal government.

Sources: Politico historical breakdown of Biden's position, Letters from Biden on the topic in the '70s

This claim is VERIFIED, true.

In 2013, then-Gov. Hickenlooper announced his proposal to expand Medicaid at no cost to the state general fund.

Since Hickenlooper launched the Medicaid expansion, Colorado’s uninsured rate has dropped from 14.3% in 2013 to 6.5% in 2017, according to the Colorado Health Institute.

CLAIM: Marianne Williamson said that "So many Americans have unnecessary chronic illnesses — so many more compared to other countries."

There is evidence to support this claim, but it comes from scientific studies and is not a “proven” fact.

Data from a November 2014 study by the Commonwealth Fund showed that 68% of American’s above the age of 65 had two or more chronic conditions. That’s compared to the UK, New Zealand, Sweden, Noway, France, Switzerland, the Netherlands, Germany, Austria, or Canada. The highest rate outside the US was 56% in Canada.

There is evidence for this, at least for older Americans.

Source: Study by the Commonwealth Fund

This was a claim also heard in the first debate from Senator Cory Booker.

This claim is VERIFIED, true, but only when talking about federal taxes.

Amazon is among 60 companies the Institute on Taxation and Economic Police listed as paying nothing in federal taxes.

ITEP’s analysis did not include foreign, state, or local taxes. Netflix, for example, paid nothing in federal taxes but did pay $130 million in foreign taxes.

It’s true that these companies didn’t pay federal taxes in the U.S., but the claim that they paid “no taxes” is false.

CLAIM: Eric Swalwell claimed that Biden made a speech where he talked about “pass(ing) the torch,” in 1987.

This claim is true. Biden did make that statement in a 1987 speech when talking about John F. Kennedy’s inaugural address.

As seen in the C-SPAN recording, Biden’s exact words were “Remember how you felt when you heard let the word go forth, from this time and place, that the torch has been passed. Passed to a new generation of Americans.”